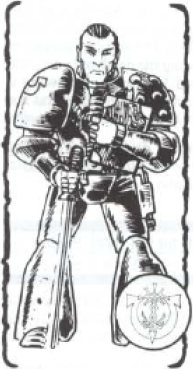 Illiyan was born to a human mother on the world of Badab following the expulsion of the Tyrant there in 912 of the current millennium. His father was an unknown Eldar mercenary. The youngster was gene-tested at birth in accord with the law and subsequently taken into Imperial custody. He was reared in the government compound by the Imperial Mission which took over the running of Badab after the war.

Along with other potential psychics he undertook the journey to Earth in 924 where further tests led to the eventual soul-binding in 925. From that point Nastase was recruited into the Administratum as an Astropath. He attained the ranks of Secundus, Prefect and eventually rose to hold Consulship for four years, helping to run the Adeptus Terra's advisory Senate to the Master of the Adeptus Astra Telepathica. Following this he undertook four years' service with the fleet, a further two years with the Dark Angels Marines and was appointed as chief of the Macragge interstellar communications link under the jurisdiction of the Ultra-Marines (965). Nastase is now 76 years old (current year 987) but, thanks to his parentage, shows few signs of age.