Virtually all Daemons take great care to keep their true names a secret. Only the most powerful Arch Daemons, who need not fear domination by any other creature, do not bother to hide their true names. Therefore, by definition, a Daemon who does not hide its true name is powerful enough to ignore any summoning or strictures paced upon it.

The true name of a Daemon is often completely alien and very nearly unpronounceable. Knowledge of a true name grants power, and gives some leverage when it comes to dealing with a Daemon. As a consequence, a Daemon will never voluntarily reveal its true name, nor can it be commanded to do so except on pain of utter and total destruction. Most Daemons will, however, reveal the true name of another Daemon, providing that it knows any names (but it may lie about this and 'make some up'); the name in question belongs to a Daemon that is weaker than it is, and a suitable reward for this service is offered. At the very least, this reward will be release from any binding or summoning.

Other sources of Daemons' names are books and tomes of daemonological lore or the notes of a Daemonologist. All these will be written in obscure and coded ways to keep such knowledge away from the foolish, unwise or weak.

WFRP: Not knowing a Daemon's true name gives a -25% penalty to the chance of controlling it. In addition to being written in Arcane Language - Daemonic, correctly puzzling out names that are present in a text also requires an Intelligence test. The GM should make this test in secret. Success means that the name has been correctly deciphered; failure indicates that the character has translated the name wrongly, has mistaken an inflection or otherwise made an error. A Daemon will still answer to this 'wrong' name but will not, of course, bother to correct its summoner. The mistranslated name grants no benefite to the character in dealing with the Daemon.

As a result of keeping their true names secret, Daemons use a number of false names and titles. These vary for a single Daemon, according to mood or circumstance: Pinchbottle, Maeltranseer, The Inescapable Defiler of the Way, The Silent Enemy or whatever. Daemons will apply such 'use-names' to themselves as they think fit or as amuses them. Daemons with the power to change shape are not above such elementary practical jokes as changing their names to match their latest form. Such use-names are not important to a Daemon, as they give no benefit to anyone who knows them.

The use-name of a Daemon will often reflect its nature. The Bloodletters of Khorne, for example, have use-names such as Fluxgore, Skullsucker, The Render of Limbs, The High-handed Slayer of Innocence and the like. On the other hand, the Greater Daemons of Slaanesh have names and titles such as the Puissant Giver of Indescribable Pleasure, Rutwobble, The Lurking Despoiler and the Bringer of Joyous Degredation. Examples of titles are given in the relevant sections for Chaos Daemons, and these can be used as inspiration.

Daemons may adopt a variety of titles, some of which might resemble names, but the true name of a Daemon is unlike that of a mortal being. A Daemon's true name can be incorporated into rituals of summoning or binding, or be invoked by its servants to call their master's attention to them. Daemonic names are often very nearly unpronounceable by human tongues, but a trained ritualist learns the intricacies of speaking them exactly as they must be spoken for the power to flow through the strange syllables.

Table 3-1: Daemonic Names on page 135 allows the GM to generate names for Daemonic NPCs with d100 rolls. Each roll on the table provides a single name element. Daemons of greater power have longer, more complex names, while lesser Daemons might have as few as three name elements. For example, a minor Bloodletter of Khorne might be called by invoking the name Dredaruz (composed of the Khorne name elements "dre", "dar", and "uz"), while a powerful Keeper of Secrets might jealously guard its true name of Malya'aishui'iel (made up of the Slaaneshi name elements "ma", "lya", "ais", "hui", and "iel").

Daemons are chaos incarnate, unfathomable beings of a shifting nature, but there is one constant about each of them, from the lowliest imp to the most towering Greater Daemon: they each conceal a true name. Most such names are a rolling tide of nigh unpronounceable syllables beyond the wit and sanity of most to speak aloud, but to do so is the greatest defence against the unnatural creatures of the warp; to know a Daemon's true name is to hold ultimate power over it, and so their bearers keep them secret, even from each other.

To this end, use-names and titles are utilised instead. These follow certain patterns, although they are recurring themes as opposed to rules. Khorne Daemon use-names are guttural and violent sounding, and those of the Bloodthirsters are often composed of eight syllables or letters, like Khazdrak. Their titles are bold and typically descriptive: the High-handed Slayer, Skullrender, the Unstoppable Fury, and so on. Tzeentch Daemons are most likely to change names and titles, for it often suits their needs to do so; a single Lord of Change might go by many different names and titles at any given time. Nurgle's creations favour names with seven letters, and their epithets are either grandiose or descriptive, such as Feculux the Master Mucanoid. Slaaneshi Daemon use-names utilise sibilant sounds,such as Sslythri or Dryzla, while they have a preference for long, grandiloquent titles such as the Exquisite Matriarch of Agonising Delights. 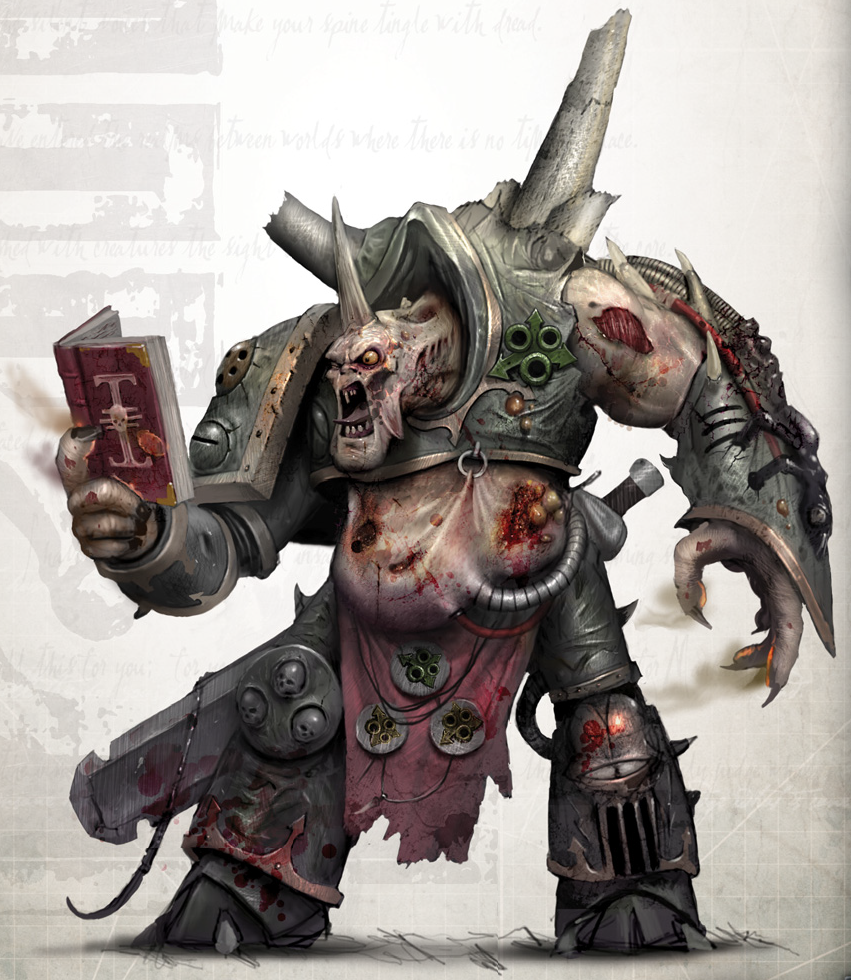