In the Warhammer 40,000 setting, Plague Hulks are a type of Daemonic Engine: an unholy merging of Daemon and machine. These particular monstrosities have the walking legs of a Defiler combined with the bloated body of a Nurgle Daemon that wields deadly weapons.

Forge World both wrote the background and rules and produced the model for this particular creature, as part of their Imperial Armour series of publications for Warhammer 40,000.

Bloated, multi-limbed walkers similar in form to the Defiler and the Soul Grinder, Plague Hulks appear to be a direct hybrid of machine and a corpulent Daemon-thing of Nurgle, Chaos god of disease and decay. Ungainly and sickening to look upon, Plague Hulks lumber into battle upon corroded metal limbs, their engines giving off clouds of reeking vapour and pestilent fog, poisoning the very ground they walk over. The Plague Hulk's mechanical chassis supports a seething maggot-ridden mass of putrescent Daemon-flesh, at the centre of which sits a gaping maw capable of vomiting forth a tide of unspeakable foulness that can rot flesh and corrode metal. One of its arms is fused with an arcane cannon that belches out shells so impregnated with ichor and infection that a mere scratch from their bone casing fragments will immediately and agonisingly fester into a crippling injury.

Like many other Daemon Engines, these decaying monsters also possess massively powerful limbs able to smash through the strongest armour with ease, and they are often encountered wielding gigantic cleaver blades or huge rusted flails. Worse yet for any one brave or foolhardy enough to stand against a Plague Hulk in battle, they must first endure clouds of flesh-searing poison before attacking the bloated machine-thing itself.

Historator-savants in the service of the Ordo Malleus are unclear as to when and where Plague Hulks were first encountered, for the archives contain numerous accounts of daemonic engine-things that broadly match their description. The earliest likely sighting of a Plague Hulk was during the 4th Anancus Gamma Counter-Strike, when a demi-company of the Red Hunters Chapter, under the mandate of Inquisitor-Lord Skane, was assailed by a wave of daemonic servants of Nurgle, including a number of Daemon Engines that Skane later reported as being hybrids of machine and Daemon carrying weapons capable of unleashing torrents of warp-spawned filth and decay. The Inquisitor made it a lifetime's work to ascertain the true nature of these horrors, seeking them out with increasingly maniacal fervour wherever the Warp encroached upon the material realm. Skane and an indentured Red Hunters task force vanished into the Caradryad Warp Fault in late 693.M39 whilst pursuing a mission, and it is assumed the Inquisitor-Lord was slain in the course of this Emperor-given duty.

Following the disappearance of Inquisitor Skane, several allied peers and Throne agents have continued this work, and it is from their studies and reports that most of what is known of the Plague Hulks is derived. It has been determined that Plague Hulks are summoned forth from the depths of the Warp rather than being constructed, and as such they may represent some incarnation of the Soul Grinder specific to Daemons aligned to the Ruinous Power known as Nurgle.

This is largely conjecture however, for few witnesses have survived a full-scale manifestation, and even those few Plague Hulks that have been destroyed have not left behind any wreckage that could be recovered or studied. It is believed that Plague Hulks are summoned or called upon by a specific ritual incantation known only to the most blessed of Nurgle's sorcerers and magi, and which is instant death to any who have not mastered the inner mysteries of the lore of decay. As the 41st Millennium draws to a close however, Plague Hulks are being encountered in ever greater numbers. From the cratered wastes of Vraks to the planet-spanning defence lines of Cadia, wherever the decayed hosts of Nurgle take to the field of battle, there too are to be found the lumbering Plague Hulks, the ground itself putrefying as they unleash the foul gifts of their master upon the material realm. 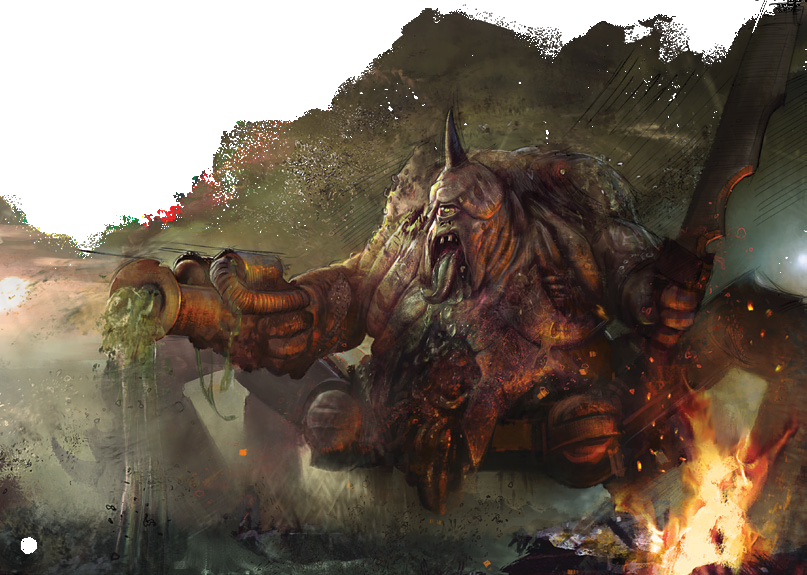