The Mabrothrax (or Plague Elemental) was introduced in the very early days of the Warhammer setting, and was given a model. But it fell out of canonicity, receiving no mention in later works.

You might infer from the text below that the Mabrothrax is an individual Greater Daemon of Nurgle (and thus the first documented Great Unclean One). In fact this is not so; there may be several Mabrothrax, given the wider context of the book. On the same page there are two more examples of Greater Daemons: the Mardagg (Death Elemental of Khorne) and the Viydagg (Life Elemental of Law); both are referred to in the same style of language as that used for the Mabrothrax, but these are definitely not individuals given additional text of the form, "Whenever a Mardagg is summoned, there is a 10% chance that a Viydagg will be sent to destroy it. A Mardagg killed by a Viydagg is destroyed for ever."

The name of Scabeiathrax may be a reference to the Mabrothrax. 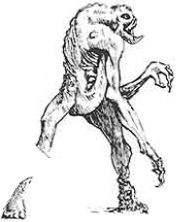 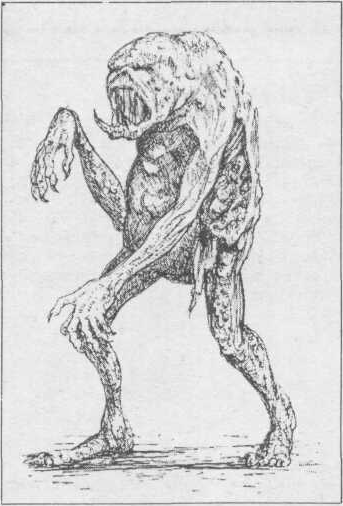 Also known, incorrectly, as the Plague Elemental, the Mabrothrax is in fact a solitary Greater Demon. It is said that it is a servant of the Chaos god Nurgle, the Lord of Corruption (of whom more details will be found in the Realms of Chaos supplement), but little is known of its true nature. It can manifest itself as a foul, stinking wind, but it is most effective when it takes physical form. On those occasions when it appears in the material world, the Mabrothrax spreads disease and pestilence, wiping out whole populations.

The Mabrothrax attacks up to 10 times per round, in any direction irrespective of facing. Its attacks have a 100% chance of causing infected wounds. GMs who have a copy of the Realms of Chaos supplement may decide that the Mabrothrax causes Nurgle's Rot instead of infected wounds.

Physique: When in physical form, the Mabrothrax appears as a hunched, decaying humanoid figure which stands about 12 feet tall when fully erect. It has the appearance of a month-old corpse, and its skin is covered in festering boils. Bones and internal organs protrude in the places where its skin has rotted away.

Psychological Traits: The Mabrothrax causes terror in all living creatures, and fear in creatures which are immune to disease.

Special Rules: The Mabrothrax carries the Black Plague (see Disease) when in physical form, and any creature coming within 10 yards of it is exposed to the plague and must make the appropriate saving throws. Once per round it can cast Plague Wind - a spell which is similar in its effects to the level 4 Necromantic Magic spell Wind of Death, which requires every living creature within 2,400 yards downwind of the Mabrothrax to make a Toughness test. Failure indicates that the creature is instantly stricken with a rotting disease, losing 1 point or 10% from each characteristic each round until a successsful test against Toughness is made. When it takes the form of a fetid wind, it can move through solid objects in the same way as an Air Elemental. It is immune to non-magical attacks, and its attacks can wound creatures which are immune to non-magical weapons, unless they are also immune to disease.