In the Warhammer 40,000 setting, Plague Towers are a type of Daemonic Engine: an unholy merging of Daemon and machine. These particular monstrosities take the form of massive siege towers armed with huge cannon-like weapons. 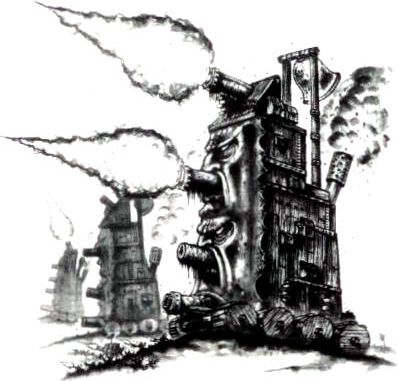 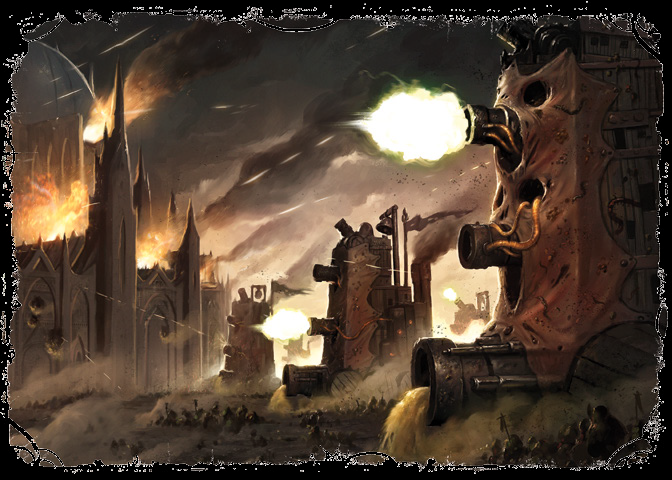 While many warlords prefer to lay waste to a planet from orbit, some prefer to make an example of their conquests. Disciples of Khorne and Nurgle usually follow this path, and while Khorne usually prefers large-scale battlefields where blood flows freely and skulls are piled, Nurgle's followers have a unique reputation for laying siege to a population where it thinks it is safest. At the height of these sieges, Plague Towers are an all-too common sight; looming, rolling battle-towers from a long-dead age, covered in flayed human skin, and carrying disease and filth. Created from a massive pustule summoned by sorcerers or Warpsmiths upon their arrival, these hulking creations are filled with the gifts of Nurgle, ready to be bestowed upon new hosts.

Armed with two conventional wall-breaching Demolisher Cannons, the plague tower has little difficulty shattering a city's defences. The two unique weapons, the Bile Cannon and Plague Mortar, however, are the key elements to the success of this device. The Plague Mortar lobs shells tainted with contagion as it rolls toward its target, sowing slow death among the population that is not killed outright. The Bile Cannon is designed to rid the initial breach of defenders by blasting them with a foul stream of pus and ichor. Those not instantly killed are covered in oozing rashes and sores as the corrosive liquid works its way through armour. The towers also serve as transports for large numbers of crazed followers. It is no wonder that these hulking engines of war are often seen as harbingers of a grisly end.

†Assault Ramps: These ramps allow insane followers of the Great Corruptor or his Daemonic minions to mount an assault on the walls of a fortress or city. When a Plague Tower moves into effective assault range of a fortification, the ramps drop to disgorge its passengers. The Plague Tower is capable of holding up to 50 occupants with a Size Trait of 5 or lower.

††Nurgle's Blessing: A Plague Tower is a Daemon Engine of Nurgle, and is always Aligned to Nurgle.