In the Warhammer 40,000 setting, Plague Knives are bladed weapons used by Plague Marines.

They are similar in form and function to (though smaller than) Plagueswords. A particularly large and potent Plague Knife is Puscleaver.

Plague Marines of Nurgle are armed with rusty, dirt encrusted blades which have been blessed with some of the Lord of Decay's most purulent diseases. A deep cut from a Plague knife will fester and become gangrenous within moments, poisoning the victim's blood and rotting away their flesh.

Special Rules: A Plague knife drips with virulent slime. A wound from this weapon will kill mortal creatures outright on a D6 roll of 6 regardless of how many wounds the target can sustain normally; on a roll of 1-5 the knife just inflicts 1 wound. Only mortal creatures are vulnerable to the Plague knife, not daemons. 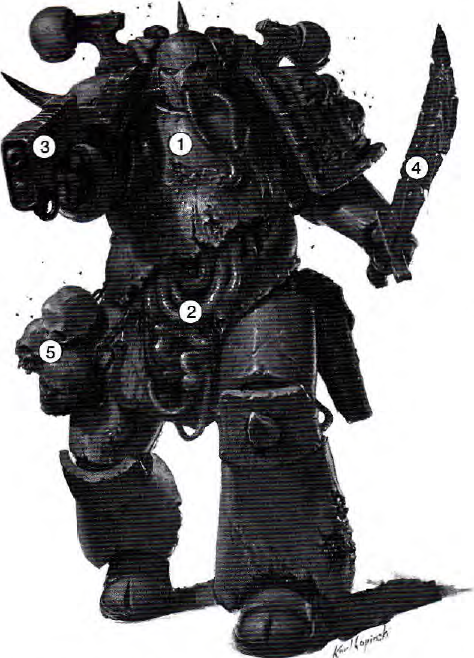 Corroded and diseased blades that have been blessed by the great Nurgle, plague knives are sure to deliver their blighted corruption to any who are even scratched by them. These are one of the ways the dreaded Plague Marines deliver their "benedictions" across the galaxy.

The long, pitted knives used by the Plague Marines are encrusted and dripping with the most virulent of viruses. Their wielders believe that they are each blessed by Nurgle himself, for the rot they carry and spread is so powerful that it can lay low even the most monstrous enemies in seconds.

Seen in the hands of dreaded Plague Marines, the Plague Knife is a long, thin blade caked with grime and dripping with disease. Small cuts can transform into raging infections within seconds, and the blade can fell even the largest of creatures with a single swipe.

A Plague Knife is a one-handed Legion Weapon.