This Codex, for the third edition of Warhammer 40,000, takes the earlier Codex: Chaos and streamlines it. Most of the flavour and colour has been removed. The army list has been reduced to just chaos space marines, with daemons making a token presence as summoned creatures but with very little differentiation (particularly for lesser daemons). The background material is much thinner, and there is little to encourage followers of just one chaos god. It is succeeded by Codex: Chaos Space Marines (2002). 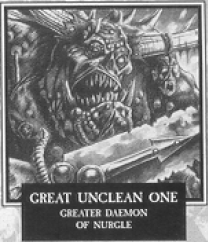 It is impossible to describe the true horrors that are the Greater Daemons. They are the physical manifestations of the evil and despicable Chaos powers. Of all the followers of the Chaos gods, they are truly the closest in nature and spirit to their overlords.

Weapons: All Greater Daemons are armed with a variety of weapons with which to slay their mortal enemies. Some, like the Bloodthirster, carry more than one weapon, but this has been included on their profiles, so they do not receive any extra attack for having an additional close combat weapon.

Possession: A Greater Daemon must possess another model in order to enter the battlefield (see the special rules in the introduction to the army list).

Fearsome: If the Greater Daemon wins an assault their opponents automatically have to fall back without a Morale check being taken. Opponents that never fall back or ignore Morale checks ignore tihs effect and will not fall back.

Fearless: Greater Daemons never fall back and cannot be pinned. They are assumed to automatically pass any Morale test.

Monstrous Creature: Greater Daemons are huge and terribly strong opponents. They are treated as Monstrous Creatures and therefore roll 2D6 for armour penetration and ignore their opponents' armour saves in close combat.

Invulnerable: Greater Daemons are unnatural creatures made from the very stuff of Chaos and are therefore very difficult to destroy. They are treated as being invulnerable and therefore may make an armour save against any and all wounds they take, even those that would normally pierce their armour or that allow no save to be made.

Wings: The Bloodthirster and the Lord of Change have wings. This allows them to make a 12" assault move, ignoring any intervening terrain between them and the target.

The Daemon has many forms. You must know them all. You must tell the Daemon from his disguise and root him out from the hidden places. Trust no-one. Trust not even yourself. It is better to die in vain than to live in abomination. The zealous martyr is praised for his valour; the craven and the unready are justly abhorred.
— The First Book of Indoctrinations 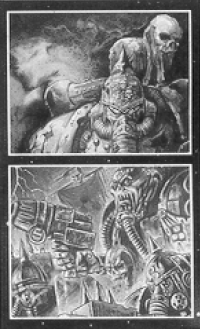 Plague Marines are Space Marines who are sworn to the Chaos god of decay and pestilence - Nurgle. They have disgusting rotted bodies that stink of decay and their armour and weapons are pitted and corroded by putrid slime that oozes from their many sores, but they are still fearsome opponents. Their decaying brains are inured to the agony of their bodily corruption, making them all but immmune to any pain caused by battle wounds.

Squad: The squad consists of between five and ten Nurgle Plague Marines.

Weapons: Bolter or bolt pistol. All models have a Plague knife.

Options: Up to one Plague Marine may be armed with one of the following: meltagun at +10 pts, flamer at +3 pts, plasma pistol at +5 pts or plasma gun at +6 pts.

The entire squad may be equipped with blight grenades at +3 pts per model.

Rhino: The entire squad may be mounted in a Rhino armoured carrier at an additional cost of +50 pts.

Troop Choice: If the army is led by a Chaos Lord bearing the Mark of Nurgle then Plague Marines may be taken as Elites or Troop choices. In any other circumstances they may only be taken as an Elites choice.

Fearless: Plague Marines never fall back and cannot be pinned. They are assumed to automatically pass any Morale check.

Plague Knife & Blight Grenades: These items are described in the Chaos Wargear section of this Codex.

Plaguebearers are listed as one flavour of Daemon Packs on page 13, but are not given any real detail:

Daemons are the foot soldiers of the Chaos gods, desiring nothing other than to rip the opponents of their master apart in close combat. There are dozens of different types of Daemons, including Bloodletters, Daemonettes, Plague Bearers, Pink Horrors and others too numerous and ghastly to mention.

Pack: Daemon packs consist of between five and ten Daemons.

Summoned: Daemons are summoned onto the battlefield as described in the special rules at the start of the Chaos army list.

Invulnerable: Daemons are unnatural creatures who have been formed from the very stuff of Chaos itself and are therefore very difficult to destroy. They are treated as being invulnerable and may make an armour save against any and all wounds that are inflicted upon them, even those that would normally pierce their armour or that allow no save to be made.

Infighting: Each different type of Daemon is the creation of one of the Chaos gods so Daemons created by different Chaos powers can not be mixed together in the same pack. Also, each type of Daemon pack has an associated special rule, which is described below.

Nurglings are the creations of the Chaos god Nurgle. Accompanied by a babbling cacophony, hordes of Nurglings spill across the battlefield in a living tide of mayhem. Their vicious bites and clawing hands can pull down foes many times their size, sweeping away opposition by sher weight of numbers.

Swarm: The swarm consists of between three and ten Nurgling Bases.

Not Summoned: Note that, unlike any other type of Daemon, Nurglings are not summoned to the battlefield and instead deploy with the rest of the army as normal.

Invulnerable: Daemons are made from the very stuff of Chaos and are therefore very difficult to destroy. They are treated as being invulnerable and may make an armour save against all wounds they take, even those that would normally pierce their armour or that allow no save.

Nurgling Infestation: The vehicle has been infected by Nurgle's Rot and is infested with pestilence - decaying limbs and tentacles begin to grow from it. The vehicle is rotten to the core, slimy ooze covers the tank and Nurglings swarm all over it. The armour value of each of the vehicle's locations is increased by +1 point, up to a maximum of 14 points.

Beast of Nurgle: The model is accompanied by a Beast of Nurgle. The characteristics for the Beast are shown below. The creature will attempt to remain within 2" of his master at all times. In effect the two form a special unit and must obey all the Unit Coherency rules.

Special Rules: The Beast of Nurgle has an Invulnerable save and D6 attacks in close combat. Roll to see how many attacks the Beast may make each time it fights a round of close combat.

Nurgle's Rot: After normal attacks in close combat, roll a D6 for each living model (friend or foe!) in base contact with the bearer of this gift. On a roll of 6 they contract Nurgle's Rot and suffer a single wound, with no armour save allowed. Invulnerable saves may be taken as normal. Note that this only applies to living foes, not to other Daemons, vehicles, Talos, Avatars or Wraithguard.

Plague Banner: This is a frightening creation of rotted hide flapping in a pestilent breeze. Poewrful magic holds a great spell in check within it until the time is right to send disease and decay scything through the enemy's ranks. The banner contains a potent spell of destruction which may be cast once per battle. The spell inflicts D6 wounds which may be distributed on any enemy models within 6" of the standard, but no more than 1 wound may be applied per enemy model. No armour saving throws apply. Note that this only applies to living foes, not to other Daemons, vehicles, Talos, Avatars or Wraithguard.

Plague Sword: The Plague Sword drips with venomous slime. No armour saves are allowed against wounds inflicted by a Plague Sword. In addition, a wound from this weapon will kill mortal creatures outright on a D6 roll of 4 or more, regardless of how many wounds they have. On a roll of 1-3 the Plague Sword only causes 1 wound. Note that this only applies to mortal foes, not to other Daemons, vehicles, Talos, Avatars or Wraithguard.

Stream of Corruption: Stream of Corruption is a psychic power that may be used in the model's assault phase instead of moving (the model may fight as normal). A Psychic test must be passed in order to use the power. Place the flamer template so that its narrow end is touching the model using this power. Any models fully or partially under the template suffer 1 wound on a D6 roll of 4+, with no armour or cover saves allowed (Invulnerable saves may be taken as normal).

When Horus led his attack on the Emperor, the rebel Death Guard Legion was marooned in the warp where a mysterious contagion began to spread from ship to ship. The stinking pestilence bloated the gut, distended the flesh and turned its victims rotten from the inside. Eventually Mortarion became infected and in his delirium he called upon the powers of Chaos to aid the Space Marines. Mortarion's fevered ravings were answered by Nurgle and Mortarion became Nurgle's Champion.

The Death Guard, newly dedicated to Nurgle, arrived in time to take part in Horus' attack on earth and fought in all of the major battles of the campaign. As disease began to disfigure the Death Guard, their appearance changed into the disgusting form they still bear today and the once tall and noble Space Marines of the Death Guard became Plague Marines of Nurgle. Following Horus' defeat, Mortarion led his Death Guard in a merry dance of destruction over a score of planets until finally retreating with the remnants of the legion into the Eye of Terror.

Following their retreat from the material universe, it becomes difficult to say with certainty what happened to the Death Guard. However, it seems likely that Mortarion received Nurgle's ultimate reward and became a fully-fledged Daemon Prince, ruling over a Plague world in the Eye of Terror. From this dark and slimy world Mortarion launches fleets of Plague ships into the warp to carry their contagion through the galaxy.

In the colour section, there are some relevant photographs: Plaguebearers are one of the example daemon packs on page 34 and again on page 39; Plague Marines are pictured on pages 35 and 38. Page 42 also includes a note on painting pustules. Finally there is a Great Unclean One on page 46.