'Eavy Metal on page 7 includes a Plague Cart and a converted Great Unclean One (with a giant maggot-like lower body, and writhing tentacles replacing its left arm). 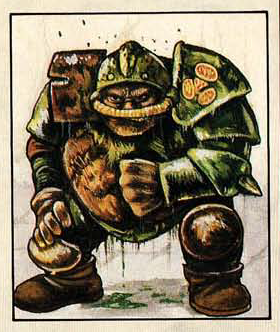 There is a full page spread in 'Eavy Metal on page 28 for "Followers of Nurgle", including Champions, a Warrior, Beastmen, a Great Unclean One, a Plaguebearer, and a group shot of a warband (including a Palanquin and at least six Great Unclean Ones!). The relevant commentary is on page 55. "This spread shows the Daemons and servants of Nurgle and Tzeentch, the two Chaos Powers featured in The Lost and the Damned, the second part of Realm of Chaos. The two armies feature a number of, as yet, unreleased models." The unreleased models are: the Chaos Warrior, the three Beastmen, and the Plaguebearer. 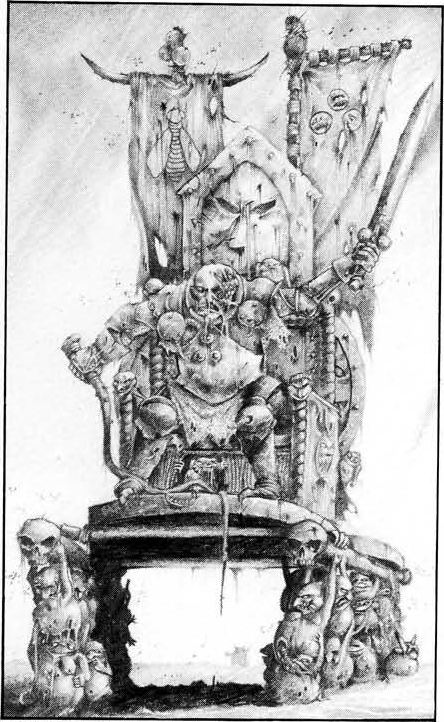 There are two Realm of Chaos articles in this issue, both with new content. The first adds additional background and rules information for handling Palanquins of Nurgle:

Of the Plague Lord's many strange devices, the Palanquin is among the finest. A Champion of Nurgle who receives a Palanquin is honoured indeed, held in high esteem by his master to warrant such a gift. Seated on his Palanquin, held aloft by a swarm of Nurglings, the Champion can enter battle enthroned, as glorious as any lord or princeling to the eyes of his admiring followers.

And on daemonic battlefields, bands of Daemons ride to war, carried by their lesser brethren, proud of their ageing finery. Surrounded by a cloud of buzzing flies, wielding jagged broadswords, bringing with them the incurable taint of disease, Plaguebearers, Nurgle's Lesser Daemons, face their enemies from gilded thrones and taunt the lower beings who are to feel their master's wrath.

The Palanquins of Nurgle are large ceremonial litters used by the Lord of Decay's most trusted servants, Seated on ornate thrones, these Champions and Daemons are borne into battle on the shoulders of a horde of Nurglings. Many of Nurgle's servants are permanently confined to their Palanquins, unable to move beyond these conveyances thanks to their multitude of physically debilitating plagues and pestilences.

Palanquins usually show signs of decayed grandeur. Often they have gold fittings and velvet cushions, although in keeping with Nurgle's wishes these are battered, mildewed and encrusted with filth. A horde of Nurglings, the gibbering, flatulent Daemonic Servants of the Plague Lord, is magically bound to the fabric of each Palanquins. These act as its bearers, carrying their cargo upon a host of small shoulders. They are also capable of leaving their burden briefly to attack enemies, swarming forth to bite and nip at opponents.

When in hand-to-hand combat a Palanquin has D6 bite attacks as its Nurgling carriers swarm from beneath their burden and into any opponents. Each of these attacks has Weapon Skill 2.25, Strength 1 and Initiative 2/20. No additional models need be provided, nor is it possible to slay the Nurglings who make these attacks. Losses suffered in combat are irrelevant, given the number of carriers required by each Palanquin.

Palanquins may be used by Champions of Nurgle and by Plaguebearers, his Lesser Daemons. They have a Movement of 8, and are surrounded by a fetid smell and a cloud of flies. All opponents in close combat against Palanquin riders are at -1/10 to hit as flies buzz into eyes, noses and mouths (ie the same effect as the Cloud of Flies attribute; see The Mark of Chaos in Slaves to Darkness). It should be noted that the cloud of flies around a Palanquin absorbs the similar cloud around a Plaguebearer - the two -1/10 to hit penalties are not cumulative.

The Palanquin itself has Toughness 5 and 3/17 Damage Points. It may be attacked instead of its rider (attacker's choice). Once reduced to zero Damage Points the Palanquin dissolves into a slippery mass of nauseous slime and its bound Nurglings immediately return to the warp.

Finally, the Nurglings frequently leave a pool of ordure and similar filth in their wake. Each turn/round roll a D6. A result of 6 indicates that the Nurglings have produced just such a pool. This should be represented by a 1" diameter marker placed upon the tabletop. Any creature moving into this marked area takes a Strength 4 hit due to the foul and corrupting nature of the Nurglings' waste substances. Armour (other than magical or Chaos Armour) is ignored and the victim receives no armour saving throw. 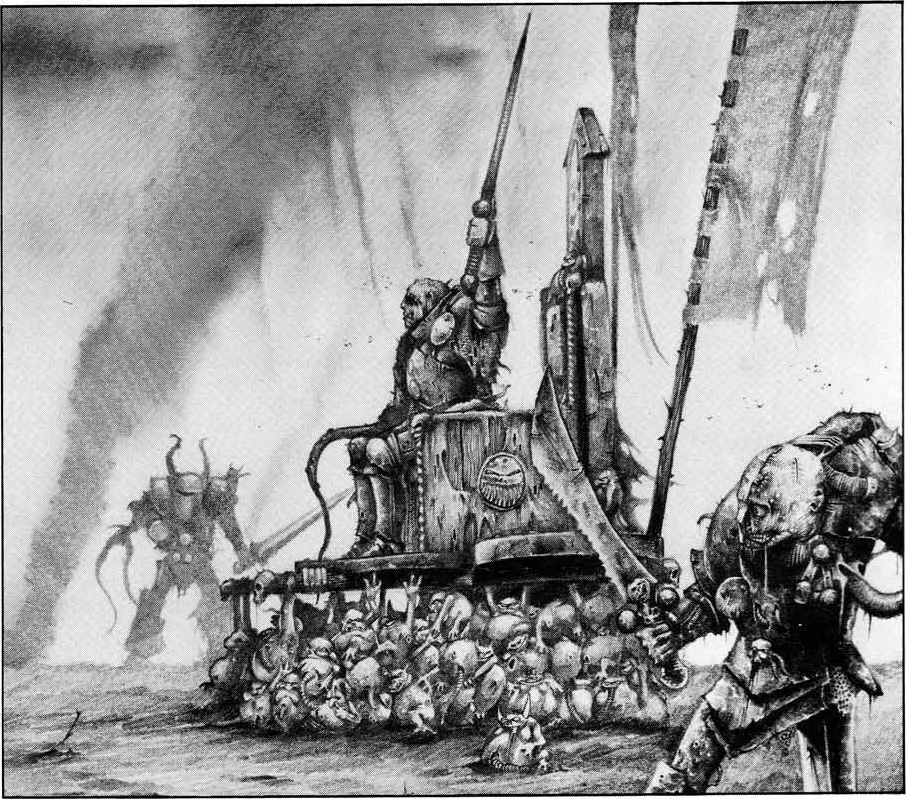 A second article (pages 68-70) details Chaos Chariots. Such an item is not part of the range of gifts bestowed by a Chaos God, but they may be built by a Champion's Chaos Dwarf followers.

New models in the mail order listings at the back include: Chaos Knights (0237), mounted Chaos Renegades (0224), Chaos Chariot (0336), and Nurgle's Palanquin. The individual components for the Palanquin are not listed here, except for the four different Champion models.