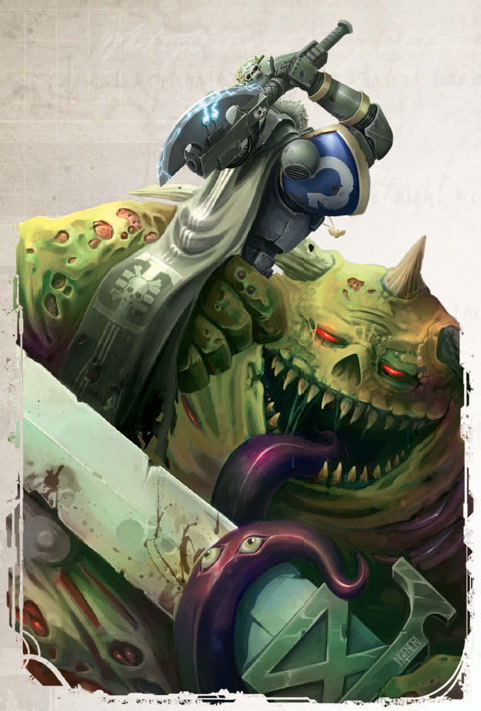 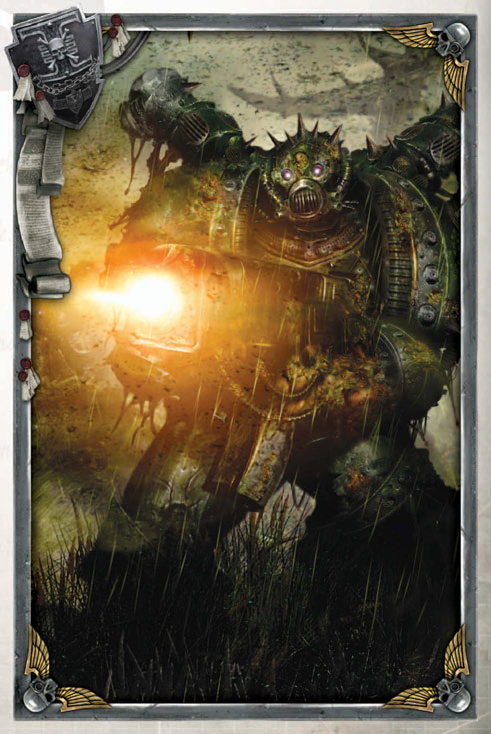 Those of the Stigmartus who revere the Lord of Flies are eager to spread their lord's "gifts" to the unbelievers. They brew noxious plagues in great rusting cauldrons, releasing a foul mist over nearby battlefields, leaving even the toughest soldiers coughing out blood and pus. The toxic miasma can reach for many kilometres, so that any army attempting to approach its source will drown in their own blood before arriving. As if this were not deadly enough, the acolytes attending the cauldron concentrate the plague into a serum that can used to coat the blades of the heretic host. Warriors mighty enough to slay a dozen Stigmartus fighters collapse in a delirious fever after only the slightest nick from such a blade.

Strength in arms cannot conquer a plague, and even the wrath of a Space Marine cannot cure the air of the fumes floating through it once the plague cauldrons are filled with their fell brew. Any Kill-team assigned to neutralise the plague cauldrons of Nurgle should be assigned a countermeasure on setting out for their mission - a sacred censer to purify the air, blessed oils that can counteract the plague brew's unholy potency, or rare archaeotech med-serums that can cure any disease. Loss of this countermeasure constitutes failure of the Mission, and will be viewed most unfavourably by the Killteam's superiors back on the Watch Fortress.

Deliver the Neutralising Agent: Once the Kill-team reaches the plague cauldrons and deals with their fanatical guardians, they must use the countermeasure they were given at the beginning of the Mission. This may require a Medicae, Logic, or Tech-Use test, at the GM's discretion.

Destroy the Inert Cauldrons: The vessels that held the plague are steeped in its essence, and leaving them intact risks another batch of the virulent sludge being brewed. Destroying them thoroughly may require heavy weapons fire or explosives.

Destroy the Concentrated Plague Serum: The foul elixirs stewing within the cauldrons are not the only source of the virulent plague toxin. The pustulent heretics who tend the brew also skim off particularly foul batches of scum from the cauldron's broth and concentrate it into a serum for smearing on blades or suitable for delivery to important targets with Needle Rifles. Though the serum is sufficiently altered that it could not reconstitute the actual plague brew, leaving these deadly supplies for retrieval by the Stigmartus is inadvisable.

Destroy the Weapon Caches: The plague cauldrons are not only deadly instruments of war, nor are they simply sites of profane worship and dedication for the followers of the Lord of Decay. They are a nexus of activity for all Stigmartus operations done in service of Nurgle. As such, they are often well supplied with stockpiles of the deadliest weapons in the Stigmartus arsenal, as well as shipments of weapons due to be treated with the toxic serum derived from the cauldrons. Depriving the Stigmartus of this armoury would severely hinder their fighting strength.

Effects of the Plague: The plague cannot breach the environmental seals of Astartes power armour, but if a member of the Kill-team is foolish enough to take off his helmet, or if his armour takes sufficient damage to breach the environmental seal (see Damaging Power Armour on page 163 of the Deathwatch rulebook), then the plague will begin to affect him. After being exposed to the plague for one Round, the exposed Space Marine must make a Very Hard (-30) Toughness Test or become infected. The test must be repeated for every minute spent exposed. Infection inflicts a level of Fatigue every hour, and 1d5 Wounds per hour (ignoring Armour and Toughness Bonus) once unconscious. Non-Space Marines must pass an Arduous (-40) Toughness Test to resist infection instead, and are slain after one hour of infection. Curing the infection is not possible while within the plague fumes, and requires an Arduous (-40) Medicae Test.