An article about cheerleaders in Blood Bowl from Ricardo Nagliati includes the following:

Nurgle teams do not have real Cheerleaders (for which we can thank the Gods!) but use Nurglings, tiny, bloated daemons that emanate a disgusting foul odour and several unpleasant diseases to boot! They gather in gibbering clumps in their team's end zone producing hideous odours in an attempt to keep opposition players from scoring. The coach may use them whenever an opposition player is about to score a Touchdown and may use this ability up to three times during the match before the Nurglings get bored and wander off to pollute a river or something!

To represent the Nurglings' effects roll 1D6 for each Nurgling in the team. If you roll at least one '6' the opposing player will stop one square away from the end zone, coughing and spluttering and he will refuse to continue moving until the next turn when he is more composed (he may Hand-off or Pass the ball to a team mate though).

And Kevin J. Coleman contributed an update on the Palanquin for Warhammer Fantasy Battle: 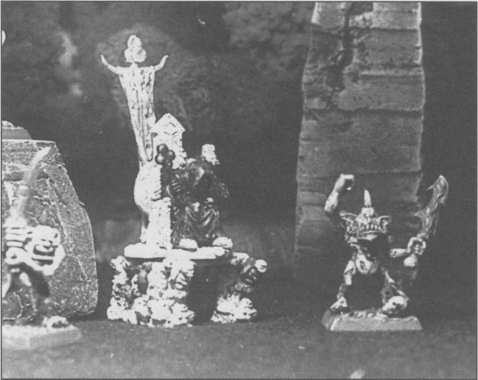 The Festering Throne of Nurgle

A Palanquin of Nurgle is a daemonic mount that takes the form of a small throne upon which sits a diseased minion of Nurgle. The Palanquin is propelled about by a swarm of Nurglings that abide only to the will of the Nurgle devoted rider. As the throne slithers across the battlefield, pools of nauseating pus and secretion are left behind like large canker sores covering the ground so foul in nature that there are no words that can truly convey them to human comprehension.

Only the most devoted and foul servants of Nurgle are gifted with this truly most vulgar of mounts. The Palanquin is not only a sign of Nurgle's favouritism for a particular follower, but is also a potent weapon of battle. The rider gains blessings from Nurgle, protecting him from hostile magic and enemy war machines; while swarms of buzzing flies seriously impede opponents in combat, buzzing into their eyes, ears, nostrils and mouths.

You may buy a Palanquin of Nurgle for any Chaos Champion or Sorcerer of Nurgle. The points for the Palanquin itself come out of the Warlord's retinue and are not added to the Warlord's points value (in the same way as for a Chaos chariot).

The Palanquin of Nurgle has a single profile that takes into account both the daemon mount itself and that of the Nurgling bearers. Movement, Attacks, damage, etc. are all explained below.

Movement: The Palanquin has a movement rate of 6 (see profile) which represents a horde of malevolent Nurglings propelling the palanquin around the battlefield. The Palanquin may never make a march move and may not move through difficult terrain.

Resolve the damage as normal. If the weapon uses a template treat the rider and Palanquin as individual targets in exactly the same way as with a chariot.

Slime Trail: Each time the Palanquin moves roll 1D6; on the result of 5+ it leaves behind a rancid pool of indescribable pus and fluid which carries the seeds of the disease known as Nurgle's Rot. Place the smaller 2" template on the Palanquin's last position where it will remain for the duration of the game. Any model (except those of Nurgle, of course) which touches the template for any reason will suffer an automatic Wound with no saves for armour, even Magic Armour or Wards.

Cloud of Flies: The Palanquin is constantly surrounded by a thick cloud of flies which swarm over the enemy distracting them and making them fumble their blows. All enemies in base-to-base contact with the Palanquin suffer a -1 on their 'To-Hit' rolls.

Note:
A Champion with the Chaos Reward of Nurgle's Cloud of Flies will not gain any extra modifiers.

Damage: When the Palanquin suffers damage it may take a basic armour saving throw of 4+ representing its Daemonic Aura.

If the Palanquin sustains three or more wounds then it is completely destroyed along with its Nurgling bearers, however the Champion may continue to fight on foot as normal. If the Nurgle Champion is slain, then the Nurglings will abandon the field and leave the Palanquin.

Nurgle's Blessing: A Champion or Sorcerer of Nurgle riding on a Palanquin is a very booned follower indeed, as he is blessed by Nurgle's foul favour. To represent this any hostile spell cast against the palanquin or its rider will be dispelled on a roll of 3+. This counts as a natural dispel and cannot be modified.

In addition, after both sides have deployed the Chaos player may choose one enemy War Machine on the field which will be execrated by Nurgle. You must announce which War Machine is to be affected in this manner. Every time that the War Machine fires at the Palanquin roll 1D6.

You only need to make this roll if the War Machine fires upon the Palanquin; it may fire upon any other units without penalty.

Fear: A Palanquin of Nurgle is a Daemonic creation and causes Fear.

Note:
The Palanquin of Nurgle is NOT affected by Daemon animosity and although many of the rules are similar to a Chariot's it does not cause automatic impact hits when it charges - it's not that big and certainly doesn't go nearly fast enough!