This is the second edition of the Warhammer 40,000 wargame, published in the form of a large boxed set containing plastic models for Space Marine and Ork armies, card ruins, a wide variety of components, and several books. The Rulebook gives the core rules for gameplay, the Wargear book has rules for equipment, the Codex Imperialis contains army lists for all existing forces at the time, and a Scenario booklet gives a range of scenarios.

The Wargear supplement has no Nurgle-related weapons or vehicles listed, but it does include the following artwork on page 79: 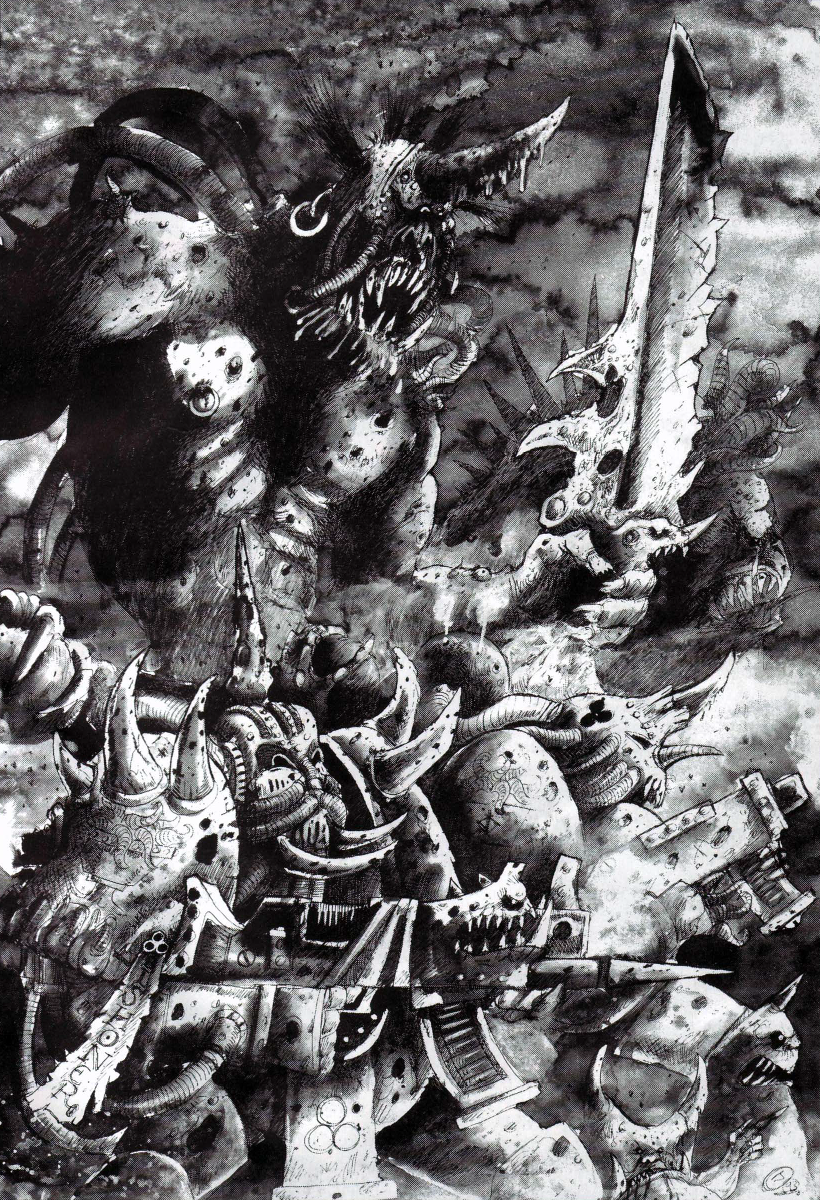 Of creations most foul I beheld the Lord of All and knew that I was dead.
— Inquisitor Brand 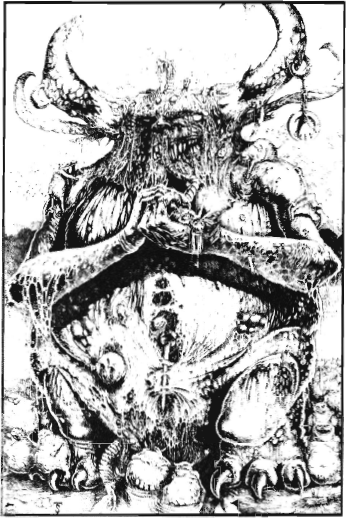 Even the most battle hardened of the Ordo Malleus dread this foul daemon more than any other. It is the very image of the Plague God Nurgle himself - huge, green-skinned and bloated with corruption. From open sores and swelling boils, pus and slime dribble over the daemon's leprous skin. Decaying inner organs protrude from rents in rancid flesh. From its gaping maw trickles a bubbling stream of vomit mixed with blood, maggots, and other foulness.

All the special rules for daemons apply as described earlier. In particular, note that the Great Unclean One has a daemonic aura which gives it a saving throw of 4+.

Terror. The Great Unclean One is the most foul of all daemons, its horrific bloated appearance is an offence to the world. Those who witness it rarely survive with their reason intact. The psychology rules for terrror apply as described in the Warhammer 40,000 Rulebook. Remember that creatures which cause terror automatically cause fear as well.

Stream of Corruption. The Great Unclean One can unleash a stream of steaming vomit over its enemies. This is worked out during the shooting phase. Use the teardrop-shaped flamer template to represent the attack and calculate casualties exactly as you would for an attack from a template weapon. The stream of vomit inflicts a S7 attack on targets it hits.

Nurgle's disgusting daemons spill into the world like a plague, riding upon a tide of tiny daemons which swirl about the horde like an infestation. These tiny daemons are Nurglings, small but malevolent things that feed upon corruption. Although tiny they are as hideous as their master, each a minute replica of Nurgle, round and bloated with disease. They swarm around the Greater Daemons, scurrying over their decaying bodies and sucking at boils for their nourishment, nestling within their master's spilling entrails for succour.

Because of their diminutive size Nurglings are represented by a large base crammed with many individual creatures. Individual models don't fight but the whole base is treated as a single monstrous creature with several attacks and able to withstand several wounds.

All the special rules for daemons apply as described earlier. In particular, note that a base of Nurglings has a daemonic aura which gives it a saving throw of 4+.

Fear. Nurglings spill over their victims like an irrepressible tide of foulness that is an assault to mind and body alike. Nurglings cause fear as described in the main Rulebook.

It is said that the fate of those who die of the foul disease Nurgle's Rot is to serve the Lord of Decay forever in the most disgusting form of a daemon called a Plaguebearer.

Huge black flies lay their filthy eggs on these foul daemons, and clumps of maggots crawl and clamber over their putrid hides, feeding upon the putrescent matter that drips from their oozing sores. When the flies hatch, they swarm around the Plaguebearer in a buzzing cloud of vileness, and will turn upon and attack his enemies.

The Plaguebearer's body is swollen with contagion, and churning innards spill from tears in their rancid skin. It has a single baleful eye and from its head sprouts a long horn. In its clawed hand the daemon carries a sword with a distorted barbed edge. This is the Plaguesword of Nurgle whose touch brings disease and death to mortal creatures

All the special rules for daemons apply as described earlier. In particular, note that the Plaguebearer has a daemonic aura which gives it a saving throw of 4+.

Fear. The foulness of the Plaguebearer overturns the mind and its indescribable stench induces nausea and fear. The Plaguebearer causes fear as described in the Warhammer 40,000 Rulebook.

Plaguesword. The Plaguesword drips with venomous slime. A wound from this weapon will kill mortal creatures outright on the D6 roll of a 4 or more, regardless of how many wounds the target can normally sustain. Note that this only applies to mortal foes, not to other daemons.

Cloud of Flies. The Plaguebearer is surrounded by a black cloud of flies that feed upon his putrid skin. When the Plaguebearers are fighting these evil buzzing creatures fly into the eyes and mouths of their enemies, clogging their ears and crawling up their nostrils. Any enemy fighting a Plaguebearer must deduct -1 from his hand-to-hand Combat Score due to the distraction of the Plaguebearer's flies. 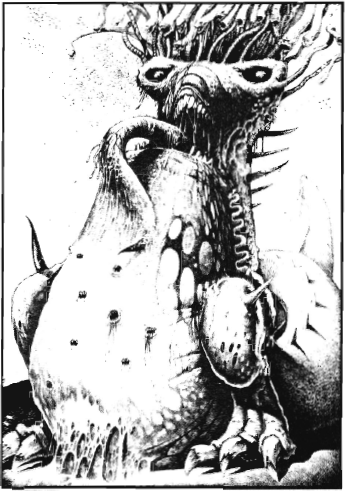 The head of this huge and slug-like daemon is fringed with fat tentacles from which oozes a paralysing slime. A creature overcome by this sticky slime will be collected after the battle and carried away to feed the broods of Nurgle.

All the special rules for daemons apply as described earlier. In particular, note that the Beast of Nurgle has a daemonic aura which gives it a saving throw of 4+.

Fear. The monstrous appearance of the Beast of Nurgle is as nothing compared to the stench of its foulness. The Beast causes fear as described in the Warhammer 40,000 Rulebook.

Attacks. The Beast of Nurgle has D6 attacks in hand-to-hand combat from its tentacles. This is determined every combat round. The slime automatically penetrates any armour that the victim has, so no armour saving throw is permitted for models wounded by the Beast.

Slime Trail. As the Beast moves it leaves a slime trail behind it. This makes it impossible for a large number of foes to attack the Beast without becoming caught up in the slime trail. To represent this factor, multiple attackers do not receive the usual bonuses when attacking the Beast: they do not receive the +1 extra attack for each opponent after the first, nor the +1 close combat modifier for each opponent after the first.

Although we divide Chaos Space Marine characters into Champions, Heroes and Mighty Heroes for convenience, all of these characters are termed Chaos Champions. Chaos Champions are the favoured servants of their masters, the Gods of Chaos, and their complete devotion is rewarded with numerous gifts of power.

As a Champion gains favour in the eyes of his Chaos God so he becomes more powerful. There is a terrible price to pay, for the Gods of Chaos are whimsical and uncarign creatures, whose gifts often bring gross physical mutation and deformity. Horns, wildly discoloured flesh, distorted limbs, cloven hoofs and other, stranger, mutations are all too common amongst the Champions of Chaos who bravely bear their disfigurements as symbols of their divine favour.

Champions of Nurgle are swollen with corruption, their armour barely containing their bloated bodies. Because their bodies are dulled with disease and partly rotted away they feel little pain and can endure considerable injury without discomfort. A Chaos Champion of Nurgle always adds an extra +1 to his Toughness on account of his hugely bloated body.