Nurgle is the Great Lord of Decay who presides over physical corruption and morbidity. Disease and putrefaction attract him like a fly to a rotted corpse. It is the lives of lepers and the sorrows of the sick that fascinate him most. For his amusement he devises foul contagions which he inflicts upon the world. Many of the most horrible diseases are the creations of Nurgle, including the nauseating Red Pox and, most disgusting of all, Nurgle's Rot.

This is the tale Gorsqualor inscribed upon my monolith, chiselled upon the Sulphurous Stone with the eye-tooth of the dragon Gorgand whom I slew. They abandoned me in the forest, I was a child marked by Nurgle, a beast they said and beast I was. My own kind found me and protected me, I learned the ways of Nurgle.

I set forth to do the Plague Lord's work, I was home for Nurgle's mites. My little friends went with me everywhere. I slew many and bestowed the rot on many more. Then I found Nurgle's gift beneath a stone - a Daemon blade of unsurpassed rust, Its tarnish was wonderful to behold and it slew well for Nurgle.

Many were my furred and horned companions, I was their lord upon the borderlands. We were the wasters of villages, the pestilence followed in our wake. My horns grew long in the service of Nurgle. Then the Plague Lord blessed me and my body burned like living sulphur. I fumed and all feared me.

My strength waxed great. To the wastes I went, I slew many weakling creatures there. Nurgle sent me a mighty mollusc to follow and seven hounds of Chaos to bark before me. The wastes were littered with corpses on our account. Great Nurgle rewarded me with aspect of maggot, and creatures flocked to do my bidding.

We spread decay and raised the stench high. I fell for Nurgle's honour. The foe slew me, but failed to end me because now my bones, gnawed clean by my brethren, lie in the black pit beneath. I dwell in Nurgle's grave realm, and sweet decay is my rest.

The largest and most intelligent Minotaurs are revered as Champions of the Chaos gods, and are known amongst the Beastmen as Doombulls. As with human Champions, a Doombull may swear allegiance to a single Chaos god, or worship them all with equal fervour, and this is often reflected in their appearance. [...] The Plaguebulls of Nurgle are foetid, bloated creatures, with gargantuan stomachs filled with corpse gas, and ridden with poxes and boils.

A creature which is visited by too many gifts of the Dark Gods eventually succumbs to madness and mutation and becomes a Spawn of Chaos. Amongst the inhuman Beastmen, the line between heavy mutation and spawnhood is a fine one, and most warherds accept these bloated, writhing creatures into their ranks. The fate of a Spawn is to die, either on the field of battle by axe or sword, torn apart in the wilds by even more savage creatures, or literally ripped asunder by the Chaos energy that continues to course through its twisted body.

Some Spawn of Chaos are even more remarkable, possessing particular traits of the gods. The Beasts of Nurgle drip with slime that burns the ground, their lashing tentacles and rasping tongues infecting their foes with a single caress. 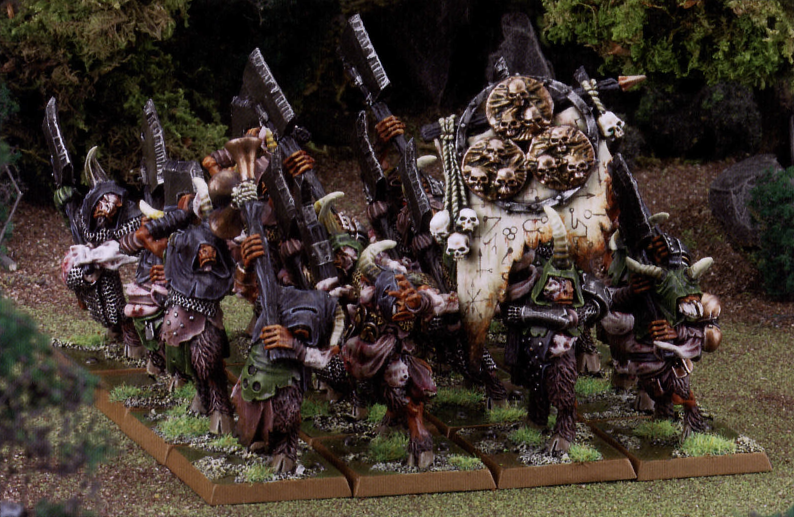 The Pestigor in the Studio Beastmen army were painted in drab greens, blacks and browns to give them a suitably grim and dirty appearance.

On page 48 in the colour section, an example of a two-headed four-armed chaos giant (painted by Jaspers Kuipers) bears the symbol the Nurgle on his breechcloth

Mark of Nurgle only — One Use Only

This rotting wooden goblet is filled with a festering brew of pus and blood, and writhing maggots and worms spill from the froth on the liquid's surface. A Shaman who sups from the chalice feels a burning pain wrack his body as the foul liquid seeps through him, yet his magical ability is suddenly enhanced, making his spells all-powerful and deadly.

The Shaman may drink from the Chalice at the start of his Magic phase. He suffers an immediate Strength 4 hit that ignores Armour and Ward saves (Regeneration may be taken as normal). For the remainder of that Magic phase, any spell cast by the Shaman will be cast with irresistible Force on a successful casting roll which includes and double, except a Miscast. 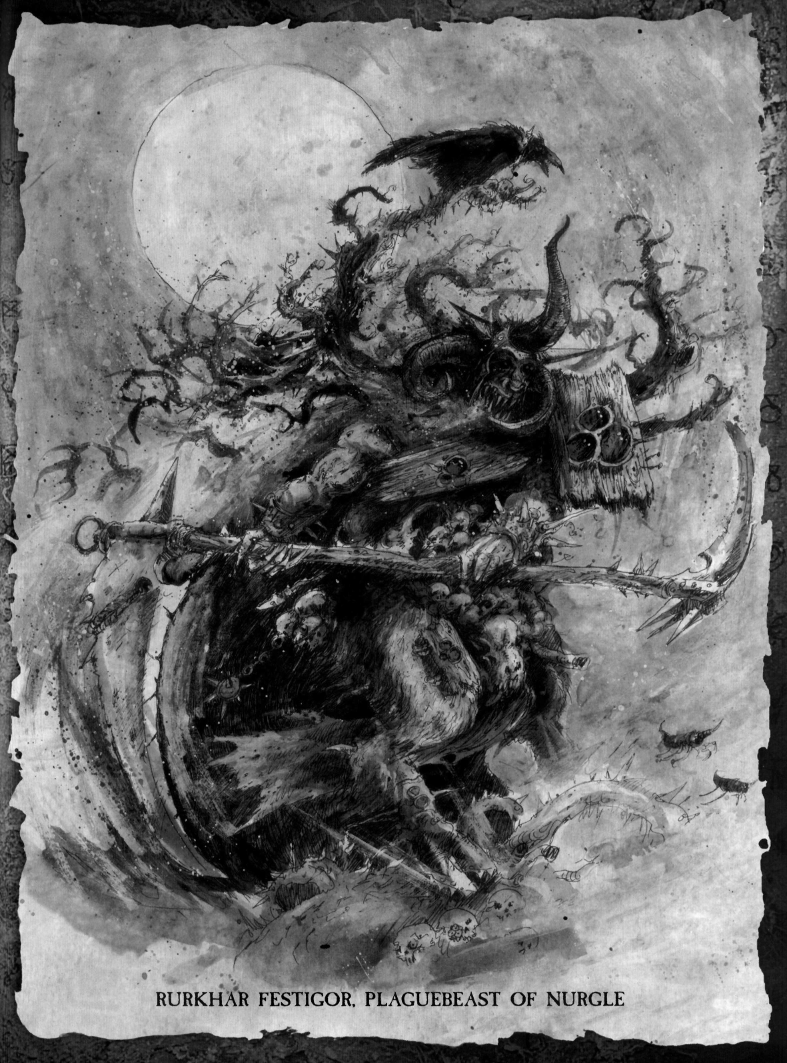 The Dark Tongue is a ritual language and the only tongue in which the tru mysteries of Chaos can properly be expressed. The language is rich in words and phrases that express the mystical and arcane complexity of Chaos. It is the language used by daemons when they enter the material world, as well as the basis of the languages spoken by the many mortal followers of Chaos, including the Beastmen.

The core of the Dark Tongue is a collection of root words, heavily endowed with meaning. The root word is altered by the addition of prefixes and suffixes to bring out the various potential meanings held within the root. Yet more meanings are yielded from the root by mutation of the root itself. It can be a highly complex language, but equally it can be spoken in a very simple manner. Although it is convenient for mortals to attack basic meanings to each word, in reality they are imbued with far greater and deeper significance to the daemons themselves; each word encompasses a myriad of associated meanings and concepts, as well as holding a power in themselves. The socerers worshipping Chaos have begun to tap the power of the Dark Tongue, but only the most powerful will even have an inkling at the potential power that is contained within it. Few mortals can unlock all the secrets within the language, nor do they need to in order to communicate effectively. The Chaos Warriors and Marauders of the far north all speak their own debased tribal variations of the Dark Tongue. Communication is possible between the different tribes, as almost all worshippers of Chaos can communicate with each other no matter what dialect they speak, although it might be difficult and slow.

Beastmen can only form many of the sounds of the Dark Tongue with difficulty, and other sounds are impossible for them to pronounce with their fang-filled, bestial mouths. They use a crude mix of brutish sounds together with the Dark Tongue and the regional languages of the Old World to form a language commonly called the Beast Tongue. To an outsider, this bastardised language sounds little more than a braying jumble of noise, a cacophony of growls, bleats and guttural howls. Indeed, their language is not at all subtle, and some of them do not have the power of speech at all. However, they are intelligent creatures, and even the most base of them can understand speech, though they themselves might only be able to communicate using grunts and growls. The Beast Tongue is an unnatural sounding language that Men cannot speak - when Beastmen and the Human followers of Chaos meet, they communicate using a mix of basic Dark Tongue, Beast Tongue, body language and signals to convey their meanings.

When leaving their mark on the herdstones, the Beastmen use a corrupted and simplified version of the phonetic runes that are sometimes used to write the Dark Tongue. However, the marks carved by the Beastmen are crude affairs, for they write only with difficulty and, as such, their written language is particularly direct and to the point.

This is the typical type of sentence that a Wargor might scratch onto the central herdstone at a Brayherd gathering. It states simply "Ghaar-Gor, Khorne, 5 and 10 warriors". This would indicate that the Wargor Ghaar-Gor, Champion of Khorne and his warband that numbered either 50 or 15 (the language tends to be unspecific about numbers and is written using different conventions by different herds) camped at the stones.

Some of the sample banners on page 75 include runes relating to Nurgle.

p77 — Gifts of the Plagued One: Lore of Nurgle

To randomly generate a spell from the Lore of Nurgle, roll a D6 and consult the chart below. If you roll the same spell twice, roll again. Any Sorcerer can automatically swap one spell for Magnificent Buboes if you wish.

The Sorcerer bestows the gift of pus-filled buboes upon one of his enemies. Pick a single enemy model within line of sight and 18". This may be a character in a unit, a war engine crew member, a character's monstrous mount, etc. The model must pass a Toughness test or suffer one wound, with no Armour saves allowed.

Calling upon Nurgle to bless his enemies, the Sorcerer inflicts wave after wave of debilitating illnesses. Pick an enemy unit anywhere within 18", even one in close combat. The unit reduces its WS, BS, S and Ld by -1 (to a minimum of 1) whilst the spell lasts. Once it is cast, Poxes remains in play until the Sorcerer chooses to end it (which he can do at any time), it is dispelled, he attempts to cast another spell, or is slain.

The foes of Nurgle erupt with glistening boils, which split the skin and cause immense discomfort. Target one enemy unit within line of sight and 24" of the Sorcerer. The target suffers D6 Strength 4 hits, with no Armour saves allowed.

The target's skin erupts with painful lesions and weeping sores. Pick a single character within line of sight and 18" (even if within a unit). The model reduces its Toughness by -1 for the remainder of the game (to a minimum of 1).

The enemy is infected with an atrophying canker that twists their limbs and withers their muscles. Pick one enemy unit on the battlefield that is not in close combat. Whilst the spell remains, the unit halves its Movement value (rounding up). If the unit is mounted, then the Movement value of the mount is halved. Flying creatures affected by this spell may only use ground movement but do not halve their Movement. Afflictions remains in play until the Sorcerer chooses to end it (which he can do at any time), it is dispelled, he attempts to cast another spell, or is slain.

The enemy are gripped by a horrific disease that causes their eyes to bleed, their tongues to swell and their internal organs to bloat. Cast this spell on a single enemy unit within 24" and in line of sight.

Although Pestilence is not a Remains in Play spell as such, the target unit is affected for the rest of the battle unless Pestilence is dispelled.

At the start of each Magic phase (both the Chaos player's and his opponent's), the affected unit suffers D6 Strength 3 hits, with no Armour saves allowed, distributed as shooting hits.