In the 'Eavy Metal article on page 11, there are photographs of a Palanquin of Nurgle and a Plaguebearer, part of "a selection of our new and soon-to-be-released miniatures." 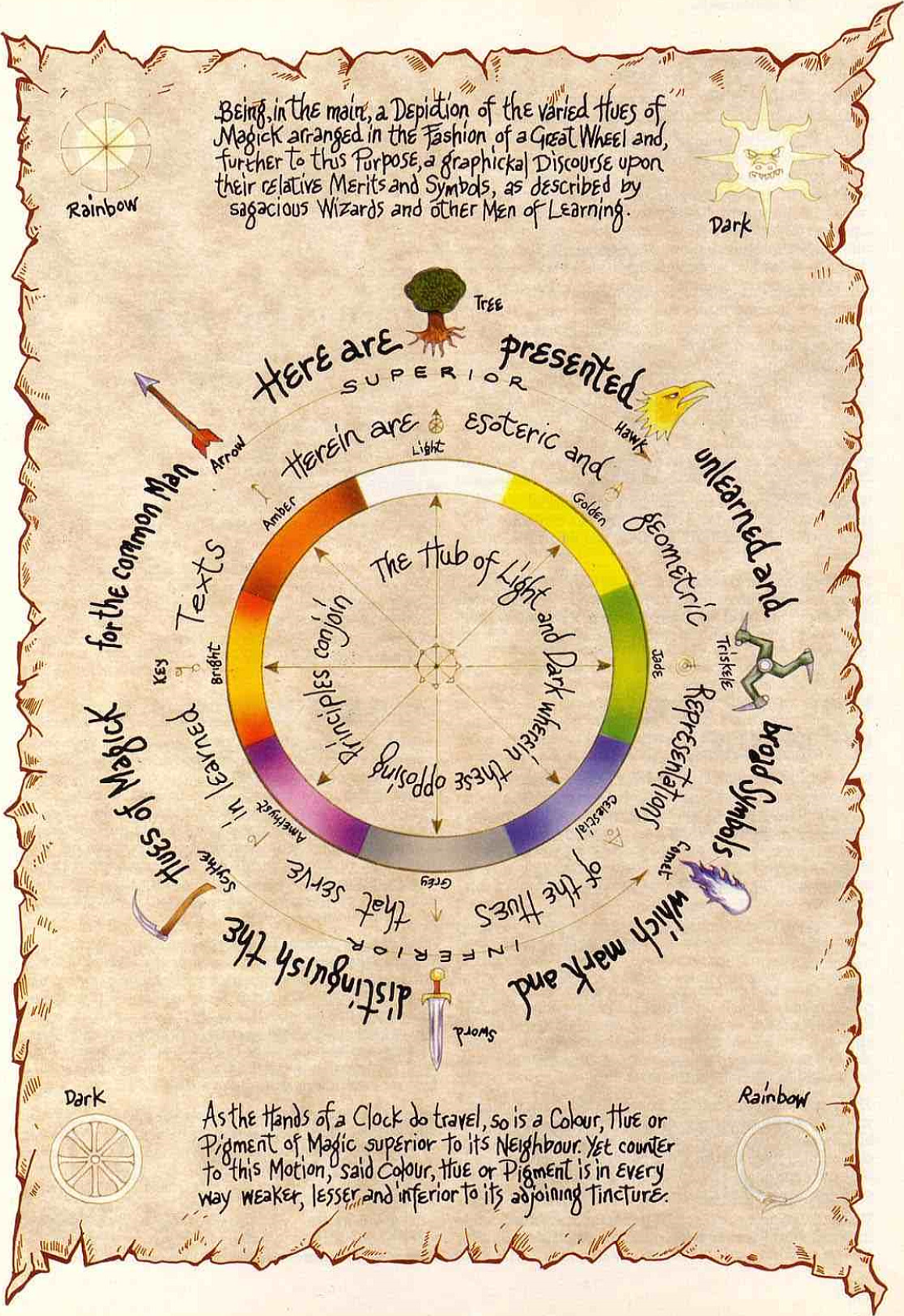 Geometric symbols of the Colleges of Magic. Note that the symbol for Jade has three circles, a variation on Nurgle's triple-circle mark, and also looks similar to various plague-related runes in the Dark Tongue.

As we have seen, the wizards of the Dark College are aligned to the colour black and can draw upon the undliuted darkness of Chaos for their magical energy. To a wizard, this is one of the advantages of closely allying with a Chaos Power. It is also a disadvantage, because the use of dark magic draws a wizard closer to Chaos, corrupting his soul and gnawing into his very thoughts. It is for each man to make his choice: are the potential gains worth the certain, soul-destroying risks?

Although the Powers are beings of Chaos, and hence associated with the magical colour black, each also has its own colour or colours on the Great Wheel. These colours reflect the strengths and inclinations of the Power, and are yet another aspect of his chaotic personality. The magical colours are the same as those favoured by the Power for other purposes.

Khorne has no magicians, of course, but his favoured colours are red and ruddy bronze, and his magical colour is also red, associated with the Bright College. It is no coincidence that Bright Wizards make good Battle Wizards: wielding red magic reinforces the martial traits associated with Khorne, the Blood God.

Slaanesh is the eternal adversary to Khorne and his magical colour is pink or mauve. Pink, pinky-orange, mauve, lilac and other warm pastel shades are commonly adopted by followers of Slaanesh, and all of these colours are encompassed by the Amethyst College. The position of the Amethyst College on the Great Wheel places it in a superior position to the Bright College and the colours of Khorne. The magical superiority of Slaanesh is both a rivalry to the martial prowess of Khorne, and a further vindication of their animosity.

Nurgle favours the livid bubbling greens of decay and dark noisome greens of stagnant slime. His magical colour of green places him with the Jade College. This is the college associated with the power of the earth and nature. It is a fitting colour for a Power whose energy lies in the ability of nature to corrupt: in the fascination of disease, the destruction of pestilence, and the disfigurement of nature by its own hand. It is a disturbing fact that the legendary wickerman, stuffed with living sacrifices and then burned, bears a strong resemblance to Nurgle himself, bloated with living offerings.

Tzeentch is the Changer of Ways and, true to his nature, he has more than a single colour. The Pink and Blue Horrors, Daemons of Tzeentch, use magic of their own actual colour, reflecting the changing forces of their master as they turn from pink to blue. However, aside from the Pink Horrors who are associated with the Amethyst College, Tzeentch's colours are very bright shades of blue and yellow. These colours are often dominant, though by no means exclusive, in the worship of Tzeentch. The two colours are particularly significant because they are the province of the Golden and Celestial Colleges which lie either side of the green magic of Tzeentch's adversary Nurgle. A follower of Tzeentch could therefore be inferior or superior to Nurgle depending on his colour.

* Pink Horrors are associated with the Amethyst College.

The Realm of Chaos article in this issue covers Narrative Campaigns, previewing content from Realm of Chaos: The Lost and the Damned.

There is a further 'Eavy Metal article starting on page 70 that has photographs of Chaos miniatures of Nurgle and Tzeentch. This includes Plaguebearers, a Palanquin of Nurgle, Champions of Nurgle, and Great Unclean Ones.

Finally the diorama photographs on the back cover include a Plague Marine contingent consisting of nine Nurgle Renegades, a Land Raider, and an Rhino infested with Nurglings.