This book of starships and related rules includes a selection of Chaos vessels, amongst which there is one Nurgle-dedicated class of ship: the Pestilaan Light Cruiser. The name is a reference to Pestilaan, a character created by Tim Huckelbery (then the head of Games Workshop USA Customer Services Department) and published in Citadel Journal #17 in 1996. By 2011, when Battlefleet Koronus was published, Tim worked at Fantasy Flight Games and (amongst other roles) was a writer/developer on Battlefleet Koronus, sneaking in a reference to his old character's name. It is explicable in that the Imperium's classification of the starship may relate to them first encountering such a vessel while it was under the command of Pestilaan. 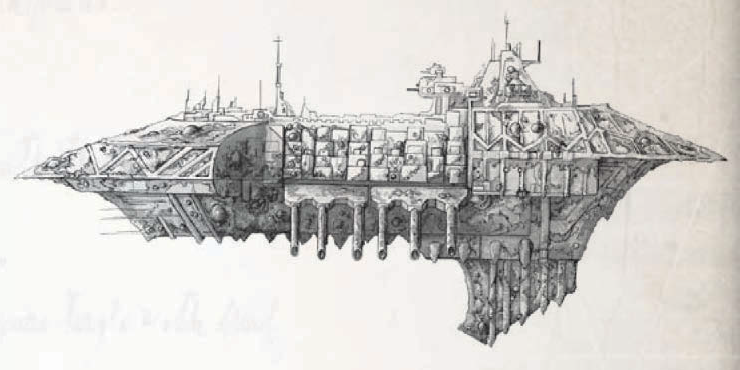 A disturbing predator in the Expanse, Pestilaan-class ships appear bloated and sluggish with tarnished, rusted metal, open sores scattered across the hull and odd organic protrusions. Such appearances belie the power of such a vessel, as its very diseased nature drives the energies that sustain both it and its crew. It is thought that the Pestilaan class is a long forgotten ancient light cruiser, upgunned and armoured at the price of speed. Most of the Pestilaans are thought to be these once-proud vessels, now debased into unclean servitude after mutiny or capture by the Archenemy.

Plagueship: These vessels are resplendent with the very finest of sicknesses and diseases, to the point where any attempt to enter it is unthinkable. Attempts to board or conduct Hit and Run attacks on this vessel automatically fail by 1d5+3 Degrees of Failure.

Nurgle's Rot: The crew of this ship are all infected with horrific diseases. Whenever this vessel conducts or is the target of a Hit and Run attack or Boarding Action, the opponent automatically loses an additional 1d5 Crew Population and Morale. There is also a 50% change that some disease will catch, and the ship will suffer a long-term ship sickness (Rogue Trader core rulebook page 227). In this case, the Medicae Test is Very Hard (-30), and the sickness does its damage once a week until contained.