This issue features two excerpts from the forthcoming Realm of Chaos: The Lost and the Damned. The first of these covers Chaos Warbands, which includes: 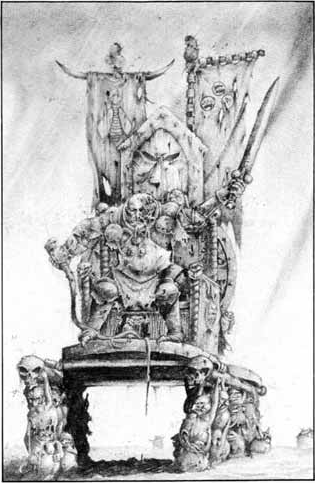 p8-12 — The Saga of Lothar Bubonicus the Exalted, Champion of Nurgle

When the Green Death raged
I swore an oath to Father Nurgle.
I bade him spare me that I might live in his service
And Father Nurgle chose me as his own.
Though all the village perished
I alone survived.
In the great forest I dwelt.
Amid the wild Beastmen, I was their shaman.

THE BEGINNING: Lothar was the only survivor of his plague-stricken village. He believed he was saved because he swore to serve Nurgle. Indeed, he survived due to his almost supernatural physical endurance. He ventured into the trackless forests and was befriended by Beastmen, who recognised him as chosen by Nurgle and accepted him as their Champion.

Nurgle blessed me with endurance.
My blood ran yellow with his power.
When the wicked ones caught me
The torturers caused me no suffering
For Nurgle lent me his great strength
And my brave followers rescued me from the stake.

BATTLE OF THE PYRE: Lothar was captured by witch hunters, tortured and tied to a stake for burning. His Beastmen followers emerged from the forest and hacked their way through the soldiers to rescue him.

The rot approached.
Longhorn bellowed loud in Nurgle's praise.
Five Dwarfs from the wilderness
They heard the call, and knew that they were saved
From death in the darkness of the woods.
By Nurgle's will.

TRIUMPH IN THE FORESTS: One of his Beastmen sent out a call of triumph in the forests. A band of Dwarfs, lost in the woods, made their way to the sound and, since Nurgle had saved them, they willingly joined Lothar's retinue, which now numbered 6 Beastmen and 5 Dwarfs.

Questing knights
Slew herd-kin in the glades.
They cooked his flesh upon their fire
And Nurgle punished them with death
Save only one, robust and strong.
He called on Nurgle and so death passed him by
To serve me as my henchman
When I was consumed with the rot.

BATTLE OF THE GLADES: A band of knights slew one of Lothar's Beastmen in the forest glades and ate his flesh only to die from the infected meat of Nurgle's herd. Lothar's retinue now numbered 5 Beastmen and 4 Dwarfs, one Dwarf having been slain in battle. However one of the Knights miraculously survived his wounds, and recognising the will of Nurgle, Lothar accepted him as his personal henchman.

The lands beyond the forest were in turmoil.
Warriors stalked the land.
Nurgle prepared us for this time of strife.
Armour for Grod, my henchman; the rust that turns a blade.
For me, mites of Nurgle, my little friends, to lick my sores.

Profane ones violated our sacred woods
With foul relics in their train.
Nurgle told us in the dance of flies
To purify his wilderness forthwith.
Grod, my henchman barred the way.
While Dwarfs and Beastman slew the impure ones.
Amongst the booty, a Palanquin to serve me as a mount.
For the rot was great.

AMBUSH OF THE RELICS: Lothar's retinue ambushed a band of monks escorting holy relics through the woods. They were warned in advance by observing the movements of flies, a divination technique known to Nurgle cultists. The monks were driven out and abandoned their wagons. In them Lothar found a high priests's golden Palanquin which tarnished as soon as he laid hands on it. This was seen as a great reward. Lothar's retinue was reduced to 4 Beastmen and 3 Dwarfs due to losses during the ambush.

The peasants fled and joined my band.
Nurgle saved them from the famine and the harsh hand of man.
We sacrificed to Nurgle, I grew green in his image.
He who tilled the fields beneath the yoke
Became one who wields the wand and brings the rain.
Such is the benevolence of Father Nurgle

PEASANTS' REVOLT: Peasants living on the forest edge rebelled and fled to join Lothar's growing band. One of them turned out to be a witch. Lothar increasingly grew to resemble his master. Lothar's band now included 4 Beastmen, 3 Dwarfs, the Chaos Warrior Grod, 5 Humans wearing armour stripped from slain lords and a Human wizard.

Into the city we came at night.
Through the sewers we were led by Nurgle's scouts.
Vermin of valour did their work well.
Now the high lords scratch and wither.
The justice of Nurgle is delivered

PLAGUE RAID ON UBERAVERGLAU: Led by Skaven into the heart of the town through the sewers, Lothar infected the castle of the prince and the houses of the rich burghers with plague in vengeance for the oppression of the peasants and the persecution of witches and Beastmen. Lothar was honoured with the Skaven title Bubonicus and his band swelled by 4 Skaven.

I saw a vision of Nurgle's realm.
A green wood stretching as far as eyes could see
Seething with life and the drone of fat flies.
When I awoke, I saw the master's rune in snail-trails.
We followed, seeking for the runes
Until we crossed the edge of fate.
We found three herdkin and the Ogre of the hills.
But Nurgle's Steed I gave to Grod
And Nurgle strengthened his arm that he might protect me.

TREK TO THE CHAOS WASTES: Lothar, having seen a vision of the Realm of Nurgle, led his band into the Chaos Wastes by following the runes made by snails with their slime-trails. On the journey Lothar was rewarded with a Daemonic Steed which he gave to Grod, whose arm had grown out of all proportion. Lothar, confined to his Palanquin, increasingly relied on Grod to fight for him as a henchman.

Twice twenty years within the Wastes.
The green glades of Nurgle eluded us.
I called to Father Nurgle: are we unworthy?
Then herdkin found the scent of Nurgle's foes.
It was a time of trial
For only the strongest live to run wild in Nurgle's glades.
We slew them, a feast for the flies.
They who followed The Changer, change no more.
The slaying of exalted ones brings great reward.
Flies swarming on the blood-drenched sword
Merged with the metal.
Runes spelled its name: Plaguebiter.
The leaderless ones flocked to my fly banners
As we march to the last battle.

CLASH OF THE WARBANDS: This was undoubtedly the most decisive battle in Lothar's career. Lothar's warband clashed with an exalted Champion of Tzeentch and his retinue. Their opponent was certainly a very great Champion on the verge of Daemonhood himself. When Lothar defeated him it was also a great triumph of Nurgle over Tzeentch. In their fervent belief that Nurgle was testing them after twenty years wandering in the Wastes, Lothar's retinue fought ferociously and annihilated their foes. For this they were well rewarded. The battle was hard-won and 3 Humans were slain together with a valiant Skaven and 5 Beastmen. Grod and Lothar, high in the favour of their lord, escaped serious wounds. Lothar gathered to himself more Beastmen and hsi band was renewed in strength, now containing Grod mounted on his Steed, 9 Beastmen, 3 Dwarfs, 3 Skaven, 2 Humans, an Ogre called Skas and a witch called Utterblight.

The green glades of Nurgle
Seething with growth and the drone of fat flies.
Beastmen gasping to drink the sweet green waters.
They who dared to bar our way
We slew them; to Plaguebiter they fell.
Nurgle rewarded us
For only the worthy may enter his realm.
Suffering I endured in Nurgle's name.
Beside this stone I shed the rags of plague
An exalted one of Nurgle, rewarded with immortal flesh.

BATTLE OF THE GLADES OF NURGLE: This was the last battle and Lothar felt it in his bones. He knew he must win at all costs and the costs were high. Lothar finally arrived at the Realm of Nurgle, but a rival warband barred his way. Lothar's retinue were overcome with thirst and charged headlong for the shade of Nurgle's glades. The sight of Lothar utterly destroying yet another foe in his unswerving determination to follow the way of Nurgle caught the eye of the Plague Lord. At long last, after years of struggle and suffering, Lothar's superhuman endurance was rewarded with superhuman form as a Daemon Prince of Nurgle. Grod survived to take over the remnants of Lothar's band. Many had fallen in the battle, never to see Nurgle's glades. Grod honoured his former master by instructing the remaining Dwarfs to inscribe a monolith for Lothar, on which this saga is carved.

Inserted into the article are a pair of 'Eavy Metal pages to showcase the two warbands: Lothar's, and that of Werner Thunderfist, Champion of Tzeentch.

The warband of Lothar Bubonicus is greatly advanced from its starting form and Lothar himself is on the verge of becoming a Daemon Prince. Lothar's armour was given several thin washes of Green and Yellow Ink over the bare metal of the model. This gives a great rotting metallic finish. The ink should not be allowed to form into any deep pools in the model's recesses - any surplus ink can easily be removed using a dry brush, achieving a consistent finish.

Adding Rotten Flesh to Bronzed Flesh and Bestial Brown gives a very effective base colour for an unhealthy skin pallor. This can be seen very well on the Chaos Dwarfs. The highlights were achieved by adding more Bronzed Flesh and Skull White to the mix.

The model for Grod the Chaos Warrior was heavily converted to fit his Chaos attributes of Overgrown Arm, Mane of Hair and Horns. The arm was taken off a Great Unclean One (a Greater Daemon of Nurgle) and was pinned into position then finished off with modelling putty to hide the joint. The Chaos Steed has also been converted to give a more Nurglesque feel. The scale armour on the horse was painted in normal metallics - Chaos Black with Chainmail and Mithril Silver highlights - then given several thin washes of Brown Ink to give a dull rusty finish.

Armour dues not always have to be painted in metallics. The Warrior Grod was given a base coat of Woodland Green and Chaos Black and highlighted with Woodland Green and Bilious Green. A thin glaze of Green and Yellow Inks helps to smooth off the finish.

Lothar's standard - a stylised vomiting fly's head representing pestilence and decay - is carried by a Chaos Dwarf. The standard was first drawn out on paper, then painted using dull, rotting colours. It was then carefully cut out using a sharp modelling knife and attached to the pole. The heads and skulls were added as an appropriately gruesome finishing touch. 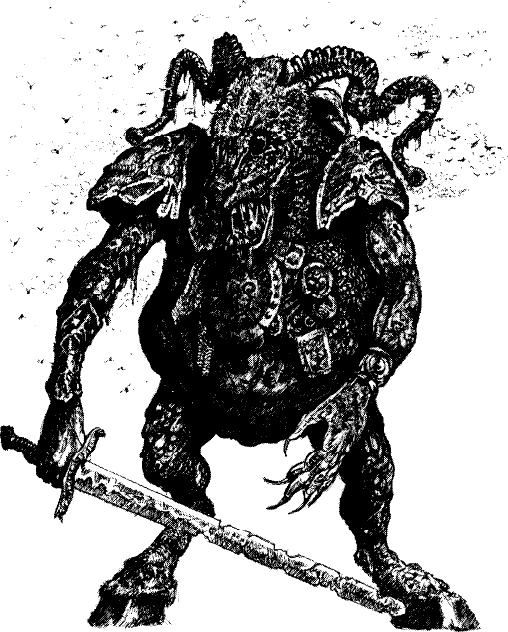 The 'Beastmen' chapter of Realm of Chaos: The Lost and the Damned is also presented here, in a 14-page preview.

p69 — The Beastmen of Nurgle

The Beastmen of Nurgle have blistered and broken skins, often red with cracked flesh and sores which have been given to them by a generous master. Their fur is matted and coarse, and their bodies are riddled with all kinds of disease. Yet they retain the morbid vigour that characterises their master so their afflictions in no way mar their battle-worthiness.

The sign of Nurgle is carved into their armour, daubed upon their clothes, and sometimes etched on their skin by the path of disfiguring disease.

A Beastman of Nurgle has a 50% chance of carrying Nurgle's Rot, although thanks to his loyalty to Nurgle the disease will not affect him. Nurgle's Rot can be transmitted to opponents in hand-to-hand combat (see Magic of Nurgle).

A Beastman Shaman of Nurgle always has the spells of Nurgle appropriate to his level. Remaining spells are generated randomly as normal. For example, a Feralflux with a magic level of 2 has the level 1 and 2 Nurgle spells Stench of Nurgle and Miasma of Pestilence.

Beastmen of Nurgle hate all enemies who are mortal followers of Tzeentch including Beastmen who follow that Patron.