The Warhammer Fantasy novel Plague Demon by "Brian Craig" (an early pseudonym of Brian Stableford) is the second of the Orfeo books (after Zaragoz). The corresponding article in this month's White Dwarf gives WFRP stats for the key characters. The story itself is set in the year 2470 of the Warhammer Old World. 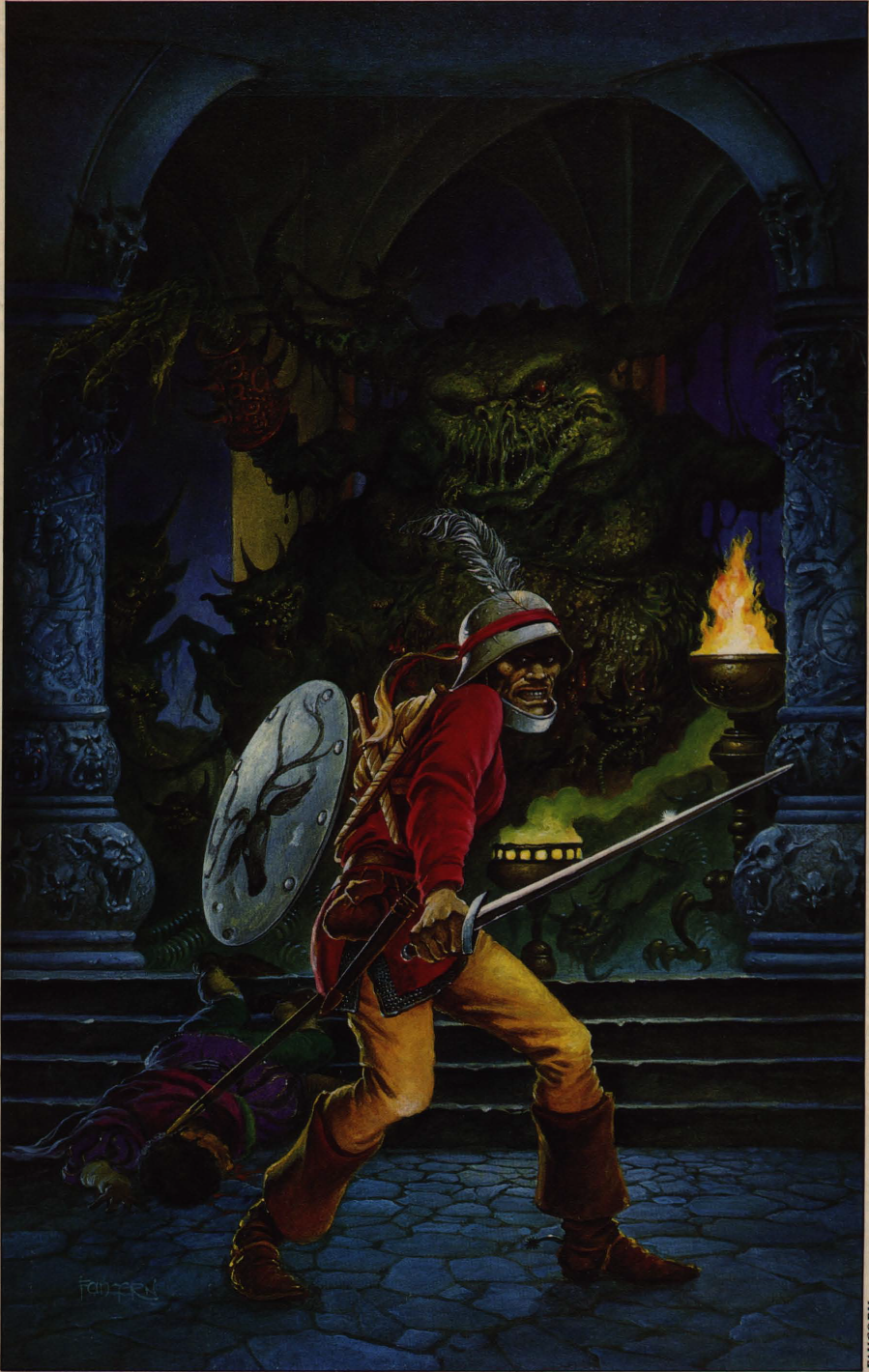 This issue includes a preview of content from Realm of Chaos: The Lost and the Damned: in this case the section on Minotaurs.

There are a few 'Eavy Metal highlights:

Pestigors, the Beastmen of Nurgle, are painted with unhealthy or even rotting fur colours such as browny-green or yellow. A good effect can be achieved by starting with a base of Bestial Brown and then highlighting with drybrushes of Orc Brown and Skull White. Between each drybrush, a thin wash of Green and Brown Ink is added for a suitably ghastly appearance. A light dappling of Worm Purple and Blood Red over parts of the fur gives a good bruised look.

Ivan worked on this mammoth project over a period of about five months, slaving during his weekends and evenings to produce this amazing conversion.

The first stage was to build the basic skeleton or armature for the rib cage and the trees. The armature was made from thick brass wire soldered together to make a really strong frame to work over. Florist's wire was wrapped around this frame to provide a rough surface for the next stage, which was to bulk out the frame with epoxy modelling putty. A length of brass tube was embedded right through the bottom of the frame to provide location points for the wheel axles, and a skeletal head was attached to the neck.

When the putty was completely dry, Ivan filled and carved it into shape. The vertebrae were individually sculpted out of modelling putty - Ivan got the basic shape right first and then added the fine detail. Florist's wire was soldered and twisted into place to form the branches of the trees, and a pair of wings from a Spined Dragon were securely pinned and glued onto the model just above the wheels.

The next stage was to put some texture on the trees. This was done by painting on a coat of varnish and covering it in sand. When this was dry, Ivan put another coat of varnish on to hold the sand in place and slightly round it off. The remnants of skin on the wings and the tattered hides on the rib cage were made from modelling putty. The putty was rolled out thin and then left until it was half-dry - it was then draped over the wing and rib-cage supports and smoothed into place with a wet modelling tool.

The birds were cut off Gothic Horror gravestones; the feet were filed flat and then the birds were pinned and glued into place. Ivan made the candles from a small piece of florist's wire which was padded out with a thin roll of putty.

The rope that supports the hanging corpse and provides the reins was made from twisted strands of florist's wire. The best way to do this is to hold one end in a pin vice and then twist the wire with a pair of pliers.

When all the pieces were thoroughly dry, the War Altar was painted. It was given a base coat of Ghoul Grey, Bestial Brown and Spearstaff Brown mixed together. This was highlighted with Spearstaff Brown, Sunburst Yellow and Skull White. The attendant miniatures were all painted separately and then pinned and glued into place. The base was made from 40mm square slotta-bases sandwiched between two sheets of 1mm thick plastic card - this was glued together with epoxy glue and the sides were filed smooth.

Steve Blunt's Nurglesque Chariot is an extremely ambitious piece of modelling on the scale of Ivan's War Altar. With large parts scratch-built, a conversion like this can take weeks or months in the planning and execution. As you can see, they're well worth all the effort in the end.

The Mail Order section at the back features all four sets of Greater Daemons, as well as the Minotaur Lords. Appropriately enough, page 77 covers Aly Morrison's first release Great Unclean Ones, listed as three separate models: 073214/10, 073214/11, 073214/12.