Renegades is a supplement for the 2nd edition of Space Marine, the Epic-scale wargame. This boxed set adds detailed rules for both Eldar and Chaos armies.

"Death Guard" is consistently written as "Death Guards" throughout the rulebook, in line with 1989's Space Marine. 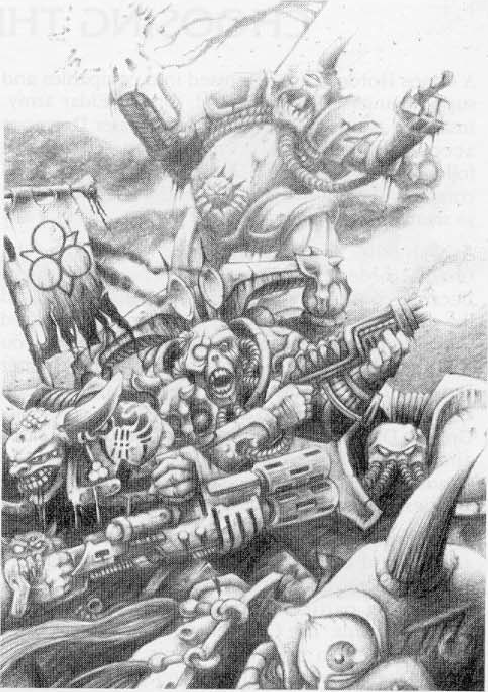 Following the Eldar half of the rulebook, the central colour section includes a picture of a Great Unclean One model on page 46, and a Death Guard champion on page 47. 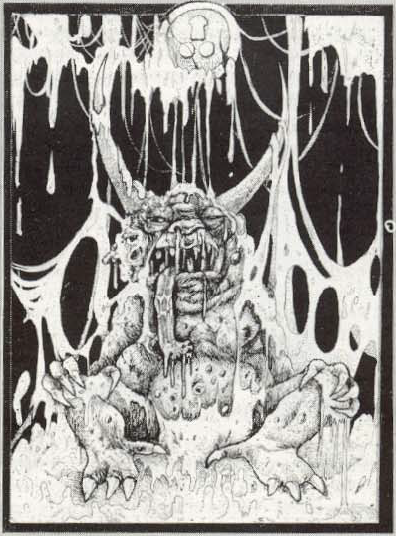 p55 — Nurgle the Lord of Decay

Nurgle is the god of plague, pestilence, decay and physical corruption. His body is huge and bloated, his rotting flesh swollen with decay and pock-marked with sores and lesions. Tiny daemons called Nurglings crawl all over his putrid carcass plucking at torn flesh and sucking at the leprous sores and putrid boils. Nurgle is full of morbid energy and enthusiasm, and his daemons travel through time and space spreading plagues and corruption as they perform their Dance of Death round cities and towns they wish to infect. Mortals who die from Nurgle's plague are never free of their agonies, as their souls are claimed by the plague god and they become new daemon servants in their turn. A mortal so much as touched by a daemon of Nurgle will catch some foul disease, and is doomed from that moment on to die. It is held that a mortal who is dying of sickness can forestall his death by calling upon Nurgle and pledging his soul to the Lord of Decay. 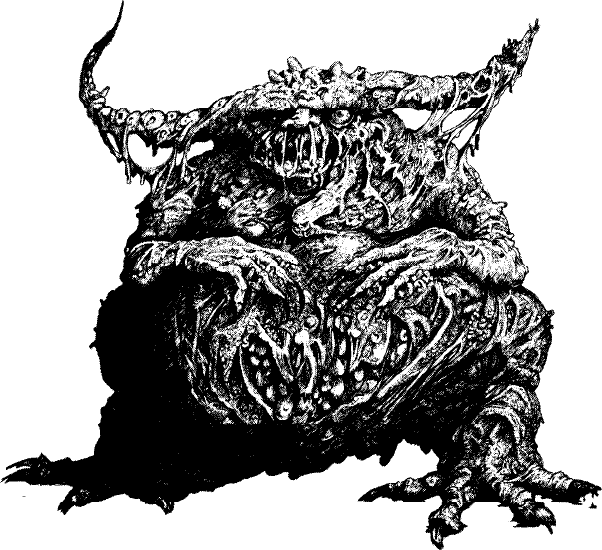 Greater Daemons of Nurgle resemble Nurgle himself in appearance and personality. Their bloated bodies ooze with sores and boils, pus and slime dribbles over their leprous skin, and decaying inner organs protrude from tears in their great bellies. Great Unclean Ones treat their followers with a gregarious and even sentimental nature, taking noticeable pride in their slaves' behaviour, diseases and achievements. All Great Unclean Ones seem to have boundless energy and drive, constantly working to extend the process of rot and decay, thoughtless for their own comfort while parts of the galaxy still remain uncorrupted.

A Great Unclean One is constantly accompanied by swarms of tiny Nurglings: miniature images of Nurgle which pop out constantly from pustules on the rotting flanks of the Great Unclean One. They are mischevious little creatures, and when they aren't off spreading boils and diseases they scramble around the body of the Great Unclean One picking at his skin and squabbling for his attention. When confronted by the enemy the Nurglings advance forward in a furious swarm, biting ankles, clawing shins and generally making a nuisance of themselves. Because of the Nurglings' disruptive effect, Great Unclean Ones never count as being outnumbered in close combat, so enemy troops don't receive extra D6s for having extra models in combat.

Great Unclean Ones can also vomit a Stream of Corruption over their foes. The daemon's bloated gut haves and contracts and the Great Unclean One spews up a stinking jet of blood, maggots, slime and other putrid foulness which chokes and drowns victims in diseased filth.

A Great Unclean One may vomit a Stream of Corruption in the first fire segment of the combat phase. Take the special Stream of Corruption template and place it so that the pointed end touched the base of the Great Unclean One and the broad end lies somewhere in the daemon's front 180° arc. Any model under the template is smothered and destroyed on a D6 roll of 3+. Any model that is affected is killed, and does not get a saving throw. Titans lose one void shield if hit, or take a hit with a -2 save modifier if all their shields are down.

During the Horus Heresy the Death Guards Space Marines joined the rebel Warmaster Horus and took part in many battles against forces loyal to the Emperor. Mortarion, Primarch of the Death Guards, turned to the worship of Nurgle, Lord of Decay, after the entire Legion became trapped in the warp and was ravaged by plague. Mortarion's fevered ravings were answered by Nurgle who saved the Death Guards and made Mortarion his Champion. Subsequently Mortarion led his Space Marines on a merry dance of destruction over a score of planets. Following the death of Horus and the effective end of the Heresy, Mortarion fled with the rotting remnants of his Space Marines into the Eye of Terror. There he received Nurgle's ultimate reward and rules the Plague Planet as the Daemon Prince Mortarion.

Mortarion is a cowled, skeletal figure wrapped in tattered robes which flap in an ethereal, pestilent breeze. He bears a daemon-etched scythe to reap the souls of the living. In the first fire segment of the combat phase Mortarion can invoke a Plague Wind, the winds around him suddenly rising to a howling blast which echoes with maniacal laughter. Choose any enemy model within 15cm. This model is infected with a deadly rotting disease and must make a saving throw to survive (models which don't normally have a saving throw save against the Plague Wind on a 6+). If the model fails it is destroyed and you can pick aonther model within 15cm of the rotting remains which must also make a saving throw to survive. The Plague Wind will continue to take effect until a model makes a saving throw or the last victim dies with no other models within 15cm. 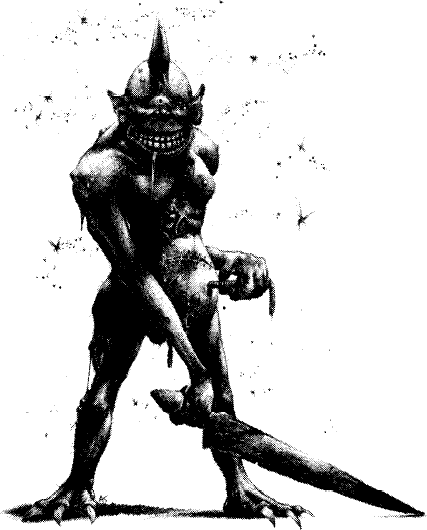 Plaguebearer daemons are the souls of those who have died victims of Nurgle's greatest contagion - Nurgle's Rot. Nurgle's Rot is an unusual disease in that it affects not only the body but the soul of the victim too. Those infected by the Rot gradually turn into Nurgle's Plaguebearers. These daemons are doomed to the impossible task of keeping account of the innumerable plagues, contagions and infections throughout the universe, counting and recounting in a fruitless attempt to impose order on a meaningless and chaotic existence.

Plaguebearers are surrounded by a huge buzzing cloud of flies. Any enemy unit that is engaged by a unit of Plaguebearers in close combat must take a morale check (even if it is not yet broken) at the start of the close combat segment of the combat phase. If the enemy fails it is forced to go on to fall back orders and so will suffer a -2 penalty to its close assault factor. Even if the unit passes the check it still suffers a -1 close assault factor penalty due to the distracting nature of the flies. The cloud of flies does affect crewed vehicles and Ttans (the flies get in through vision slits and other small openings), but does not affect uncrewed machines such as robots and Eldar Wraithguard. 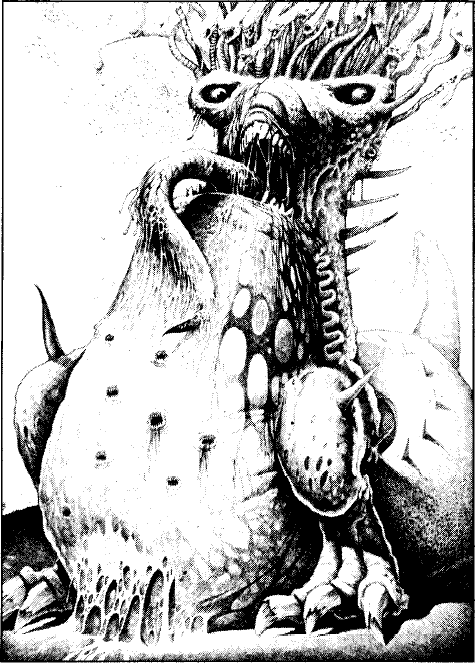 Beasts of Nurgle have a fearsome appearance: a slug-like body topped by a fringe of fat, writhing tentacles constantly oozing slimy secretions. This is belied by their apparently friendly and energetic character as they bound from one group of newcomers to the next, excitedly licking at their new friends and leaving little puddles of caustic slime behind them. The touch of the Beast of Nurgle is deadly to mortals, though they do not appreciate this and only register vague disappointment as each new playmate quickly becomes still and boring.

Like Plaguebearers, Beasts of Nurgle are surrounded by a huge buzzing cloud of flies. Anything engaged in close combat with a Beast of Nurgle must take a morale test exactly as noted above in the rules for Plaguebearers.