The Warhammer 40,000 RPG Dark Heresy was first published by Black Industries, shortly before that Games Workshop imprint was closed (despite the huge success of Dark Heresy). It was subsequently licensed to Fantasy Flight Games who extensively developed the game and adding further spin-off lines.

For a detailed overview of the entire RPG, see: The Awesome Dark Heresy: A Complete Review (which I wrote on RPG Geek). 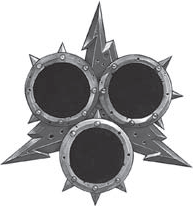 The Lord of Pestilence, the Great Corruptor, the Master of Plague, the Fly Lord

Nurgle is the Chaos god of decay, disease and entropy. Spreader of disease and Father of Decay, Grandfather Nurgle gathers all in his rotting embrace. His leprous kisses swell in the fullness of time, to glorious pus-flowers, the marks of his favoured children. His laughter echoes across the blasted battlefields of the Imperium with only the bloated corpses of the dead to hear it. 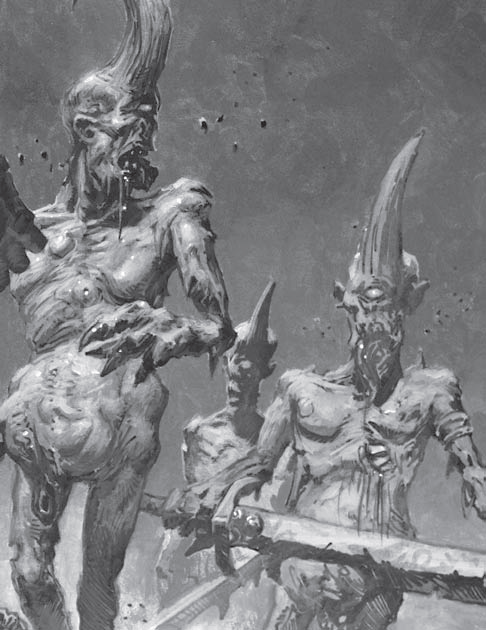 Bloated and malformed, clutching rusted butcher blades and glaring out with a single milky-white eye, these foulest of Daemons are walking incubators of the most terrible diseases and excrescence, serving Nurgle, Chaos power of decay and contagion.

Skills: Awareness (Per), Psyniscience (Per), Speak Language (any one) (Int).

†Daemonic Presence: All creatures within 20 metres take a -10 penalty to Willpower Tests.

¥Vomit: As a Half Action, a Plaguebearer can vomit on any adjacent victim. It must succeed on a Ballistic Skill Test to hit its foe. The target may Dodge the spew but may not Parry it. On a successful hit, the vomit deals 1d10+5 Damage. In lieu of Critical Damage, the vomit deals 3d10 points of Toughness Damage to the victim's Toughness Characteristic.