The Tome of Fate

The Tome of Fate is the sourcebook for Tzeentch in Fantasy Flight Games' Black Crusade role-playing game.

p9 — The Changer of Ways

Yet another way to describe Tzeentch is in contrast to Nurgle in the pantheon of the Gods of Chaos. Typically, the Changer of Ways stands in opposition to the Lord of Pestilence, just as Khorne, the god of blood and skulls, opposes Slaanesh, the prince of decadence and depravity. Where Nurgle represents Chaos as entropy, Tzeentch represents Chaos as energy. Where Nurgle promotes decay and atrophy, Tzeentch promotes potential and progress. Where Nurgle fosters deterioration and ruin, Tzeentch fosters germination and development. To many students of the Dark Powers, the (however speculative) ideological descriptions of the Changer of Ways make better sense when juxtaposed against those of Nurgle, Tzeentch's seeming antithesis amongst the Ruinous Powers. 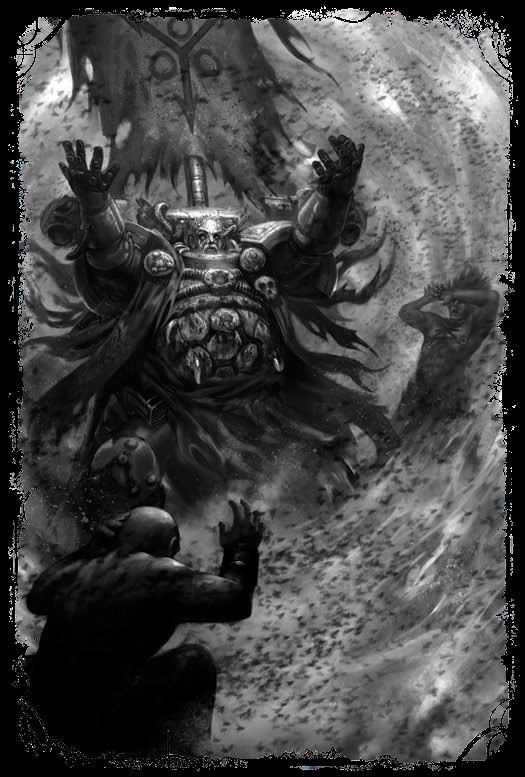 Powers of disease and pestilence are the Lord of Decay's purview. The new powers below include options that corrupt the flesh of the living, the dead, and even inorganic matter, and he that wishes to continue down the path of Nurgle worship should consider them for his arsenal. Note that all Toughness Tests made to resist an Opposed Focus Power Test for a Nurgle power are considered to be tests to resist a poison or disease, and consequently any Talents, Traits, or special abilities that grant bonuses to resist poison or disease grant their usual bonuses.

Description: The psyker's very blood and breath course with poison and disease, punishing his enemies for daring to attack him. His skin takes on a sickly colour, his veins turn green, and his breath reeks of decay. These cosmetic effects pale beside the suffering inflicted by his caustic blood as it splatters out from his wounds.

While Acidium Vitae is in effect, if the psyker suffers any Damage from Impact, Rending, or Explosive attacks, or other Damage that causes bleeding, the resulting blood spray covers his enemies and eats away at their flesh. After a triggering attack resolves, all creatures within three metres of the psyker must make a Difficult (-10) Agility Test or take 1d10 E Damage, Pen 5, with the Toxic (1) Quality. Creatures that attack the psyker with natural melee attacks (from teeth, claws, or the like) also take this damage in the same way, ignoring Armour but not Toughness Bonuses. This effect lasts for a number of rounds equal to the psyker's Psy Rating and the psyker himself is immune to the effects of this power.

Description: A rapidly progressing fever takes the target of this power, rendering him unable to think and slow to respond. Affected warriors find it difficult to stand defiant in the face of battle and struggle to take in war's chaotic events. Psykers suffering the Brain Fever battle to draw on even the most basic unholy powers of the Dark Gods. This tool indirectly but sufficiently turns the tide of battle when cunningly applied to strategic targets.

The target of this power suffers a level of Fatigue and must make a Challenging (+0) Willpower Test as a Free Action whenever attempting to perform a Reaction or an Action with the Concentration Subtype. If the target succeeds on this Test, he may perform the Action normally. If he fails, he loses the Action entirely. However, he may spend any other Actions he chooses as long as he has any left to spend for that round. Additionally, whenever the target fails a Willpower Test, he suffers a level of Fatigue. Brain Fever lasts for a number of rounds equal to the Heretic's Psy Rating.

Description: Of the more resourceful of Nurgle's followers are those sorcerers who have mastered the art of the Corpse Burst. As the armies of Chaos lay waste to their enemies, littering the war-plains with the bodies of the dead, disgusting eruptions of blood and bone, rot and disease cut through the soft skin of the Corpse-Emperor's children.

This power emits a Psychic Blast centred on the body of a dead creature of adult human size or larger. It deals 1d10 + Psy Rating Rending Damage and has the Toxic (2), Tearing, and Pinning Qualities. The radius of the blast is a number of metres equal to the Psy Rating of the psyker. All within line of sight to the explosion must make a Fear (2) Test, except the psyker himself.

Description: As the devotee of Nurgle intones the Dirge of Decay, wounded combatants howl in a chorus as rot and infection take them. As the psyker utters the first verses, fresh wounds begin to pus, only to become discoloured and rank in the rising crescendo. At the apex, an infection takes hold that rapidly devours muscle, bone, and organ until nothing is left but a desiccated husk.

Blasphemous Incantation: When Dirge of Decay is used with the Blasphemous Incantation Path to Power, the sorcerer may choose to increase the action to sustain it to a Full Action (once this decision is made, it cannot be changed until he uses this power again). If he does, on every turn that the sorcerer maintains the power he can make an attack against any one creature currently suffering under its effects. This attack requires a Challenging (+0) Willpower Test and deals 1d10+6 Rending Damage and has the Toxic (2) Quality.

Description: Though decomposition and disease of the body are more recognisably the work of the Lord of Decay, corrosion and entropy in their broadest form are also his purview. Through this power, rust coloured Tendrils of Corrosion caress materials of a more apparently timeless sort than flesh such as plasteel, adamantium, and ceramite. Corroded but not worthless, items suffering from Tendrils of Corrosion malfunction; data-slate screens crackle with interference, power weapons become no better than primitive blades, and lasguns jam with frequency.

The sorcerer targets a single weapon, piece of armour, or item of equipment within range and makes a Focus Power Test. If successful, Tendrils of Corrosion causes damage to the item and impairs its functioning. Melee weapons are reduced to Poor Craftsmanship, lose the Balanced, Force, and Power Field Qualities (if present), and gain the Primitive (6) and Unbalanced Qualities. Ranged weapons are reduced to Poor Craftsmanship, lose the Accurate, Maximal, and Reliable Qualities (if present), and gain the Inaccurate and Unreliable Qualities. All armour targeted by Tendrils of Corrosion suffers a -2 penalty to its AP (to a minimum of 0). All Tests using any gear affected by this power are taken with a -10 penalty (such as the Test for protection rating with a force field or an Awareness Test made with an auspex).

The effects of this power are reversible by someone capable of doing basic maintenance and repairs to the equipment, such as a Heretek. This requires a few minutes of time and attention and so must be dealt with outside of combat but requires no Test.

Description: Nurgle's Rot spreads across the battlefield adding disease to bloodshed as far as the eye can see. However, the survival of any disease requires new hosts for incubation and as paths of transmission. Fortunately for the Master of Pestilence, Nurgle's Rot spreads vigourously when fresh flesh is available and susceptible to its ravages. The Devotee of Nurgle, lured in and empowered by the cries of suffering his corruption inflicts, extends his consciousness through the miasma, spreading the disease along with it. Legends tell of sorcerers using this spell to gain a pyrrhic victory when defeat seems imminent.

Description: Putrid, olive green worms continually squirm from the mouth, nose, and ears of the sorcerer and writhe about his body covering his armour in necrotic slime. When an enemy strikes him, the worms leap from sorcerer to his attacker, eating voraciously at the poor fool's exposed flesh. When particularly inspired by his own foulness, he may deliver the onslaught of worms to devour an enemy. Should he succeed in destroying the wretched soul, the worms animate the corpse at his command.

Ward of Worms lasts for a number of rounds equal to the psyker's Psy Rating. While active, he gains an additional Reaction option as described in Worm Infestation below. Also, as a Half Action the psyker may prematurely end the effect to make a special attack, unleashing a torrent of worms to slay an enemy and, if successful, turn that enemy into a puppet of worm infested flesh. To make the attack, he must succeed on a Difficult (-10) Willpower Test. This attack is a Psychic Storm, has a range of five times the psyker's Psy Rating and deals 1d10 + Psy Rating Rending Damage, Pen 5, and the Toxic (2) and Tearing Qualities. If all hits from this attack are focussed on one target and that target dies due to this attack, his corpse becomes infested with worms. These worms now act as the corpse's musculature and it becomes a puppet for the caster to manipulate. On each of the psyker's turns, as a Free Action he may command the puppet to make a Standard Attack or a Half Move Action. The puppet is essentially dead, has no Psy Rating, and cannot do anything else that a living creature may normally do such as speak or concentrate; his actions are limited to standing in place or performing basic commands. Its characteristics are half the original target's values (rounded up) and does not benefit from any Skills or Talents. The worm-infested corpse has a total of five Wounds, does not benefit from healing, and falls into a bloody, amorphous heap on the ground after 1d5 + Psy Rating rounds of false life.

Whenever an enemy makes a melee attack against a creature protected by Ward of Worms, the creature may respond with this reaction after the triggering attack has resolved. To do so, the character makes a Challenging (+0) Willpower Test. If successful, a horde of worms leaps from his extended arm onto the target to devour his flesh. This attack deals 1d10 R, Pen 5 Damage and has the Toxic (0) and Crippling (2) Qualities. Armour does not reduce Damage from this attack unless it is environmentally sealed as the worms seek out any opening in the target's defences. The target may spend a Full Round Action to remove the Crippling effect.

Nurgle and Tzeentch are in many ways diametrically opposed, for at the heart of the matter Tzeentch seeks to build ever more complex and improbable webs of power, while Nurgle embodies continuous growth, destruction, and renewal. The war between the two powers is ceaseless and played out across countless realities. That which Tzeentch creates and evolves to undreamed of heights of complexity and insane perfection, Nurgle's servants gnaw away at, seeking to bring the entire edifice toppling down so that new growth can emerge from the fecund grave. A follower of Nurgle in the house of Tzeentch is assailed by the cold, harsh (sur)reality of his surroundings and overcome with the desire to tear them down and rebuild anew according to Nurgle's bountiful design.

Personal Goal: To those dedicated to Nurgle, each Compact presents an opportunity to sow the seeds of decay and rebirth amongst the deluded servants of Tzeentch. The Heretic must actively and secretly work to ensure that the warband fails to complete the Compacts. For each Compact the Heretics fail to complete, the Heretic gains 200 Experience Points and 1d5 Infamy Points.