Rather than repeat the content from the previous edition, refer to that edition's page. Instead only the changes and new content will be covered here.

Rules-wise, these changes are in line with the FAQ published by Games Workshop.

Scions of the Warp is an appendix to the Codex that adds the following additional new content:

Comparing the old Bloodthirster entry with the new set of three, the Bloodthirster of Unfettered Fury is the same as the previous listing (Warp-forged Armour is not listed as a Daemonic Gift but is still included in the profile). Note that the Lord of Blood rule has been dropped from all Bloodthirsters, so Daemon Princes of Khorne remain as HQ choices only (not Heavy Support instead); this is probably a mistake. Skarbrand retains the Lord of Blood rule since his CAD entry still exists. 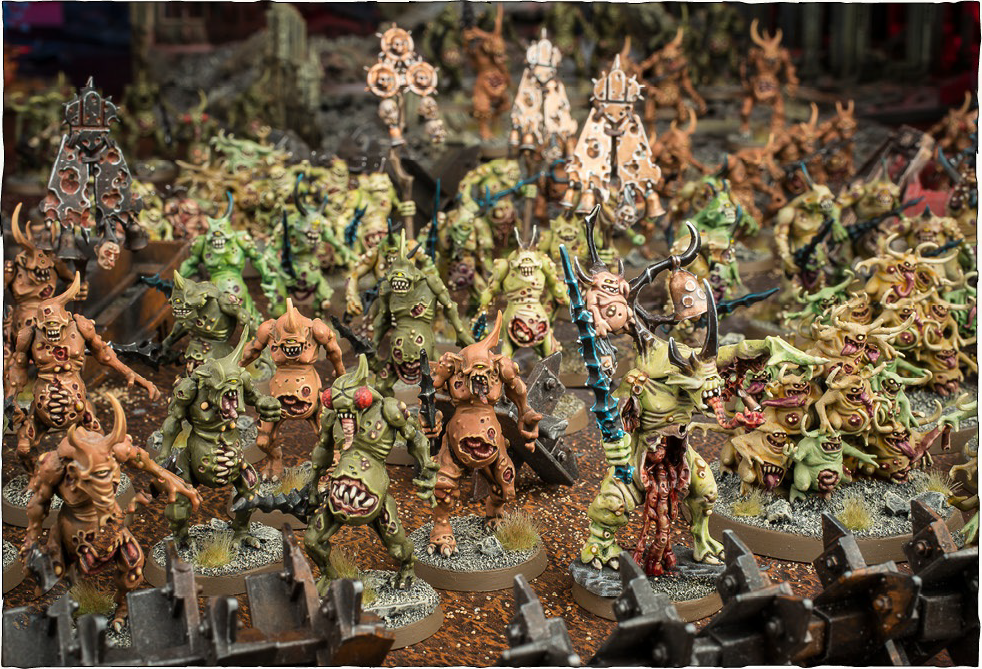 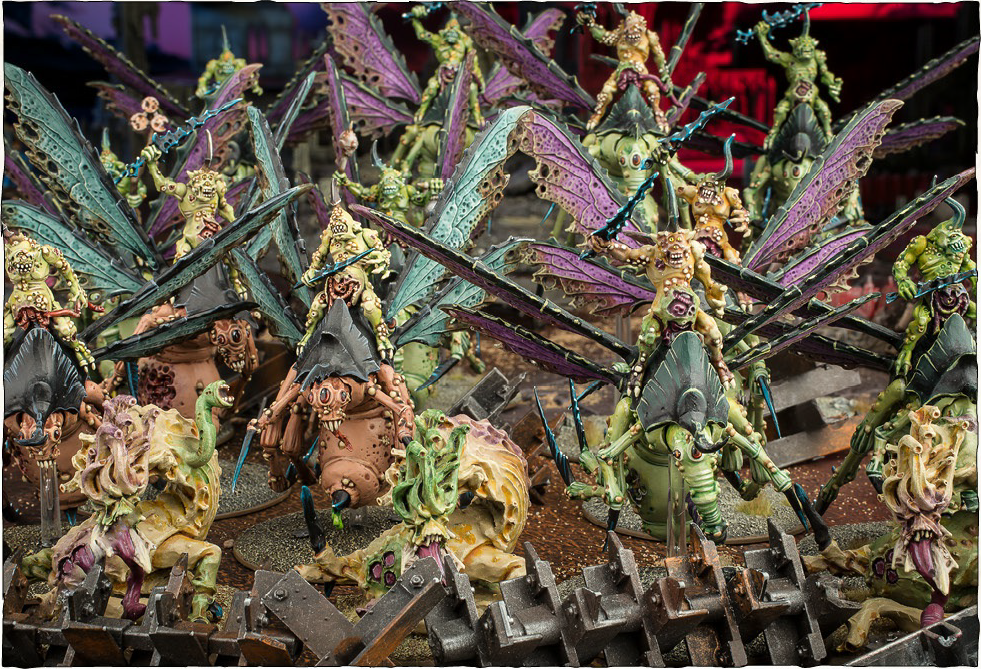 Grotti was once a mortal tribesman whose dubious personal hygiene saw him shunned even by his primitive people. After an unfortunate incident in which Grotti accidentally contaminated his tribe's stew with grox dung, leading to an epidemic of crippling gut-rot, he was finally banished from his tribe. Alone and bereft of shelter, Grotti's doom was inevitable. Yet as he slowly wasted away from starvation and fever began to take hold of his emaciated body, an otherworldly power took notice of his predicament. Nurgle gazed down upon this disgusting mortal with a sense of paternal pride and, though he chose not to save Grotti's life, spirited away his departing soul and refashioned it into a Nurgling. Ever since this unconventional apotheosis, Grotti's foetid aura has only worsened, and now has the power to wrack victims with a spectacularly messy wasting sickness.

Reduce the Toughness characteristic of all models (friend or foe) by 1 whilst they remain within 6" of a model accompanied by Grotti the Nurgling, unless they have the Daemon of Nurgle special rule.

This fabled weapon is the literal manifestation of corruption in its purest form. The merest scratch from its plague-ridden edge is enough to lay low the hardiest foe and can effortlessly overcome even the superhuman resilience of a Space Marine.

Hyper-infection: Any hits inflicted by this weapon automatically cause Wounds (there is no need to roll). Use the bearer's Strength characteristic as normal for the purposes of armour penetration against vehicles or determining if a target suffers Instant Death.

Touch of Rust: Weapons with this special rule cause a glancing hit on an armour penetration roll of a 6, unless the roll would otherwise cause a penetrating hit.

Those slain by a Daemon crowned with the fabled Horn of Nurgle's Rot are doomed to rise once more, their altered corpse joining the shambling ranks of Nurgle's tallymen.

After resolving the bearer's close combat attacks, add 1 model to a friendly unit of Plaguebearers of Nurgle within 12" of the bearer for each enemy model that was slain. The model must be placed within unit coherency, more than 1" from any enemy models. Any models that cannot be placed in this manner are lost.

So prolific are the daemon-bacteria infesting this plague-flail that the body of any foe struck down by its filth-encrusted barbs swells into a quivering, pus-bloated blister, before bursting amongst its kin in a spray of deadly contagions. Thus can dozens of foes succumb to a single swing of Epidemia.

Mass Contagion: Each time a model is removed as the result of an attack made by this weapon, its unit must immediately pass a Toughness test or suffer an additional Wound with no armour or cover saves allowed.

To hear the grim tolling of this great bell upon the winds is a death sentence, for its chime heralds the arrival of Nurgle's plague hordes. Such is its dread power that a single tolling of the Doomsday Bell reverberates for long minutes, spreading dread and despair even over the clangour of battle.

The Doomsday Bell is an Instrument of Chaos. Whilst the bearer is on the battlefield, subtract 1 from the Leadership characteristic of all enemy units.

Duke Olaks was once a proud leader of an ancient people who foolishly ordered his scientists to formulate an elixir to make him immortal. It was with great delight that Nurgle bestowed upon him a terrible wasting sickness for his arrogance. So torturous was the incurable contagion's effect on the duke's undying body that Olaks demanded his scientists develop an antidote to the elixir so that death could finally free him from his eternal torment. Though they dutifully succeeded in this venture, Nurgle was far from finished with his newest plaything. Duke Olaks' head now serves as a potent weapon that can be cast amongst the Lord of Decay's enemies to spread the very same plague that once afflicted its long-dead owner.

The source of Nurgle's strength has ever been the endless cycle of death, decay and eventual rebirth. As such, Nurgle's daemonic minions use the power of the Warp to trigger and accelerate this process with virulent plagues and debilitating afflictions in order to create a foetid existence that is more pleasing to their infernal master.

The psyker's maw distends wide before spewing forth a noxious stream of disease and filth that chokes and suffocates his victims.

Stream of Corruption is a witchfire power with the following profile:

At the Daemon's command, the bodies of his enemies bulge with excruciatingly painful inflammation, every fibre of their being wracked by torturous swellings.

Debilitating Distention is a malediction that targets a single enemy unit within 24". Whilst the power is in effect, the target unit cannot Run, perform Sweeping Advances or fire Overwatch.

The Daemon belches forth a wind of plague that chokes and poisons his foes.

Plague Wind is a witchfire power with the profile below. It has no effect on vehicles.

The daemonic followers of Nurgle use their Warp gifts to surround themselves with ghastly, vomit-inducing odours that cripple nearby foes.

Miasma of Pestilence is a blessing that targets the Psyker. At the start of each Fight sub-phase whilst this power is in effect, roll a D3. Until the end of the phase, all enemy units locked in close combat with the target or his unit suffer a penalty to their Weapon Skill and Initiative characteristics equal to the result.

The psyker reaches out a clawed hand from which drifts a vile cloud of Warp-spores. Enemies engulfed by this cloud are seized by a terribly contagious infection that blackens their flesh and rots their organs to sludge.

Rancid Visitations is a nova power with a range of 12". Each target unit must pass a Toughness test or suffer a Wound with no armour or cover saves allowed.

If a model is slain, its unit must pass another Toughness test or suffer an additional Wound with no armour or cover saves allowed. Repeat the process until a Toughness test is passed or the unit is destroyed.

The Daemon forces the energies of decay deep into his victim's body, causing internal organs to liquify and gush forth from every orifice in a revolting torrent. Only the most stalwart and resolute foe can withstand such punishing physical trauma for more than a few fleeting heartbeats.

Final Decomposition is a focussed witchfire power with the profile below. It has no effect on vehicles.

Internal Liquefaction: Instead of rolling To Wound normally for a model hit by this attack, its controlling player must roll a D6. If the result is higher than the number of Wounds the target has remaining, it suffers 1 Wound resolved using the profile above.

Beseeching Grandfather Nurgle for aid, the Daemon calls forth the blessing of the Lord of Decay to invigorate the plague-ridden bodies of his followers. Perverse vigour floods through atrophied limbs, leathery hides thicken into flabby rolls, and fresh crops of mucus-thick boils and buboes blossom.

Putrescent Vitality is a blessing that targets a single friendly unit with the Daemon of Nurgle special rule within 24". Each time this psychic power is used, choose whether it will have a Warp Charge cost of 1, 2 or 3. Whilst this power is in effect, add 1 to the Toughness characteristic of all models in the target unit for each point of Warp charge that it cost to manifest.

For decomposition and eventual rebirth - even in a corrupted form - to take place, death must first occur. So do Nurgle's vassals dutifully perform their part in the endless cycle of life.