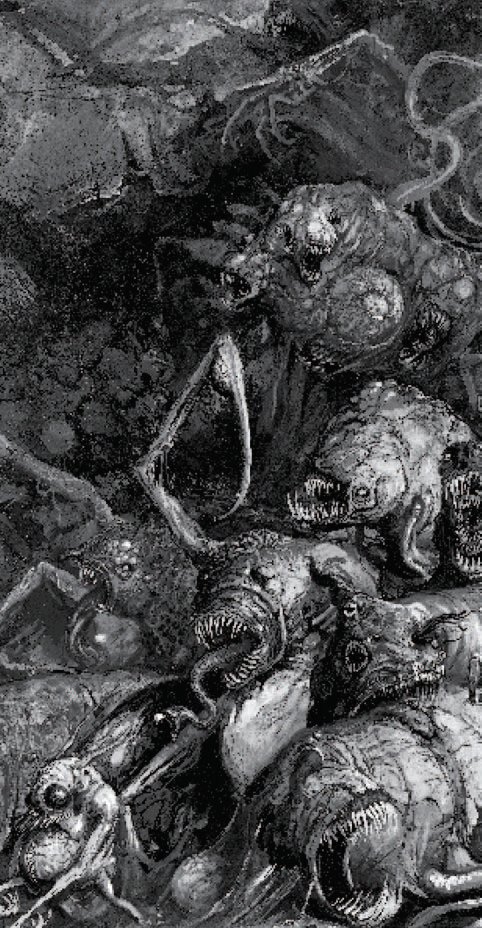 ...and the Great Father marks out those who are chosen with the gift of his Nurglings. These servants bear on their multitudinous backs his champions and chosen. They will war for them and nurture them and aid them in spreading the gifts of Father Nurgle to the undeserving and unappreciative Imperium of Man...
—From a fragment of the Liber Pestilentia

Nurglings are the lowest servants of Nurgle, the Chaos God of Decay. These diminutive yet corpulent daemons chatter and squabble amongst themselves, seeming to take delight in malicious mischief. These tiny daemons support the followers of their blasphemous deity in battle by swarming over foes, biting and blinding them. Other Nurglings act as chortling servants, bearing champions of decay into combat atop a pestilential palanquin made up of rotted boards.

Quite possibly the most disgusting creatures in existence, Nurglings are covered in horns, pustules, and tumours. These deformities cover every inch of their bodies except for their beady little black eyes and fang-filled oversized mouths. In combat, the Nurglings' two greatest advantages are their overwhelming numbers and the propensity for foes to underestimate them based on their comical appearance and diminutive size. There exists no more horrible fate than to be devoured alive by a filthy living carpet of tiny daemonic gluttons. Fanatically aggressive and heedless of their own destruction, Nurglings will fling themselves at the enemy in a rolling tide of pestilence.

Weapons: Teeth (1d10+1† R, Toxic); A victim who suffers damage from a Nurgling's bite must pass an Ordinary (+10) Toughness Test or contract a virulent disease (The nature of the disease is at the GM's discretion). A diseased victim loses 1d5 points of Toughness permanently.
†Includes Strength Bonus.

Explication: Nurglings are deceptively small and weak-looking, but their true nature is anything but humorous. These small daemons gather in large groups and attack without fear, throwing themselves one after the other to overbear larger foes.

Admonition: Area-effect weapons and flamers are effective, as are strongly presented icons of faith by one who truly believes in the Emperor's light. Purge these abominations with grenades and holy flame.

In my youth, I was often foolish and overconfident, trusting too greatly in my own overestimated importance. It was on the world of Cyrus Vulpa that I first faced up to this personal flaw while in pursuit of the heretic sorcerer Saul Charyn, who had fled there some months in advance of my own investigations. I relied upon the assistance of Stubjack Jayn, a red-haired gun-prophet of Kulth, for my own contacts on Cyrus Vulpa had vanished within weeks of the sorcerer's arrival. I must admit that Jayn was a master of her trade... in less than a month, she had pinpointed Charyn's location to a hab-block that adjoined a Schola Progenium in the capital city of Vaxport.

In my pride, I decided it would be best to capture Charyn alive, and to that end, we waited and watched for another six weeks. Jayn's network of informants kept us appraised of the sorcerer's movements and told us of his strange interest in the Schola Progenium. It wasn't until the Schola's most prominent Drill Abbott turned up missing that I realised my mistake. Jayn, myself, and six of the Black Regiment kill-troopers stormed the Schola compound in the depths of night, and we found an abattoir within, horrors that drove hardened Stubjack Jayn irrevocably insane. The sorcerer had made a mockery of the Schola, turning the nursery into a midden pit where foul Nurglings writhed and giggled in the dark. Charyn had summoned a host of lesser daemons, servants of the Plague God, to act as a rearguard. The foul, decaying things had amused themselves, and the floor was slick with mingled blood and filth.

A score of whispering, sniggering voices chorused a greeting, and then my kill-troopers and I were under attack. Tiny servants of Nurgle, these daemons capered and jeered, cackling with sly japes throughout the battle. Jayn was of no use, her sanity fractured, sobbing brokenly in the corner. With hellgun and flamer we fought them, even as the tiny daemons battled viciously from every corner. Nurglings dropped onto kill-troopers from above, yanked them down into the disease-ridden sludge covering the floor, and swarmed over us outnumbering us at ten-to-one odds. One of the kill-troopers kept his head and triggered a burst of frag grenades to sweep a path clear to the exit. He paid for that bravery with his life, but it enabled us to drag Jayn out of that room and re-group. I choked on self-recrimination and shame for having waited so long, for having given the monster Charyn the one thing he needed most: time. The Schola was purged with fire, and its site reconsecrated with holy wafers and the blessing of a high-ranking Cleric. But the stain of that battle remained on my soul for decades to follow.