Shattered Hope is a free adventure published in advance of Dark Heresy's release as a demo for the game. It showcases the key aspects of play: the first act involves social interaction to gather information, the second act demonstrates skill tests, and the third act is essentially a dungeon crawl that concentrates primarily on combat. It's a simple scenario with some interesting touches that encourage role-play and exploration; basic but serviceable, and a straightforward introduction.

It's good for getting a GM up to speed on how the system works. But a better first adventure is Edge of Darkness which presents a superb open sandbox investigation and is also avilable for free. 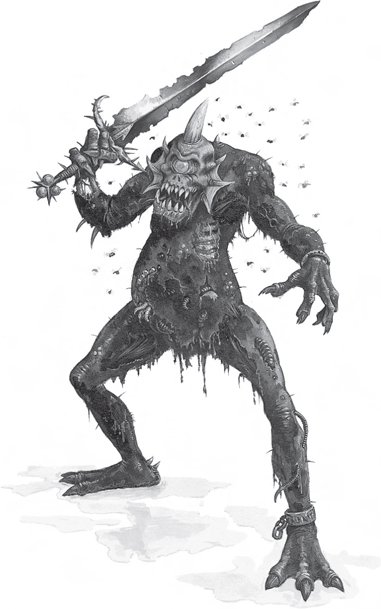 [...] the Antithesis Stone shudders and belches forth a terrifying creature of the Warp: A plaguebearer! This daemon hasn't fully been released since the Stone lacks the power to fully manifest such a creature, so it is much weaker than a plaguebearer normally would be (its Toughness is lower than normal, it has half its Wounds, and its Fearful presence is weaker).

The daemon is confused for a round and can't take action, giving the PCs a free round of attacks or to do something else. Cowardly characters might flee, but clever ones might think to use a frag grenade to deal with this horrid rock. If the PCs toss the grenade, it instantly destroys the Stone and casts the daemon back into the Immaterium. Otherwise, the characters are in for a brutal fight. Otherwise, the PCs can shoot at the stone. Three successful hits are enough to cause it to shatter and break, dismissing the daemon and ending its foul presence in this part of the Shatters.

Bloated and malformed, clutching rusted butcher blades and glaring out with a single milky-white eye, these foulest of daemons are walking incubators of the most terrible diseases andcexcrescence, serving as they do Nurgle, Chaos power of decay and contagion.

Skills: Awareness (Per), Psyniscience (WP), Speak Language (any one) (Int).

Daemonic Presence: All creatures within 20 metres see phantasmal flies with human faces swarm about them, landing on and biting their flesh. As a result, they take a -10 penalty to Will Power Tests.

The plaguebearer has the following traits.

Daemonic: The plaguebearer's Toughness Bonus is double against all attacks except for holy, psychic, and force weapons.

Fear: All creatures that behold this daemon must take a Will Power test or flee in fear.

From Beyond: Daemons are immune to fear, pinning, insanity points, and psychic powers used to cloud, control, or delude their minds.

Warp Instability: If the plaguebearer takes damage and does not deal damage to another creatures by the end of its next turn, it must make a Will Power Test. The creature takes 1 damage for failure, plus 1 damage for every 10 points by which it failed. If this would deal damage equal to or in excess of its Wounds, it is cast back into the Warp.