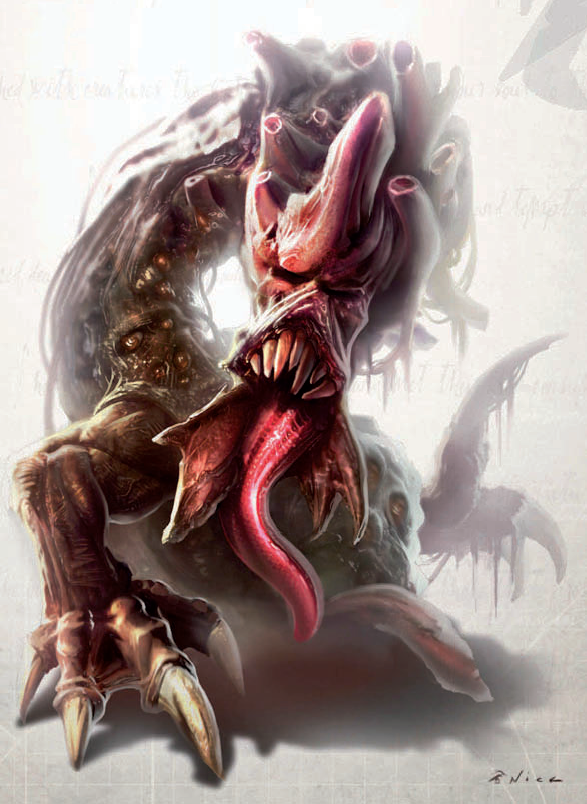 The essence of mindless decay and horrid rot given flesh, Beasts of Nurgle exemplify the Plaguelord's endless enthusiasm and excitement for forces of life and death. Thus, a Beast delights in discovering new things and making (to its very simple mind) new friends. When brought into real space they act almost akin to a curious and inquisitive pet, investigating anything and everything in sight, and spreading illness and rot wherever they go.

Immense slug-like monstrosities, Beasts of Nurgle crawl across the ground on their bellies, weakly propelled by clawed flippers, leaving a layer of stinking slime in their wake. While slow, the Beast is implacable in its advance, undeterred by all but the most fearsome of weapons, as relentless as the decay it embodies. Each is a nightmarish conglomeration of parts, with a lengthy neck holding a wide-eyed face of almost blissful idiocy. The gaping tooth-filled mouth houses a lolling tongue dripping with putrid saliva. Clusters of writhing tubes sprout from the Beast's neck and back, each one spewing forth swarms of buzzing flies, clouds of vomit-inducing gases, flesh-eating fluids capable of finding gaps in even the most secure of armour, or other foul gifts.

Unlike most daemons, a Beast kills not with rending claws and ripping teeth, but with a strange form of kindness. Victims are caressed, petted, and stroked with the daemon's multiple tentacles, while the long tongue delivers slobbery and slimy licks. In very short order, the victim is sickened, infected, dissolved, and then crushed, ground under the Beast's vast bulk. The Beast, for its part, feels a touch of sadness at the inability of its now-dead friend to join in on the merriment, but quickly forgets about him as something (or someone) new attracts its attention.

A prime example of the destructive power of a Beast of Nurgle can be found on the agriworld of Gabali III in Winterscale's Realm. There the province of Gevaudan suffered hundreds of casualties as a Beast wandered about the farm fields, destroying crops, herd animals, and buildings. Seemingly unstoppable, it took the combined efforts of Enforcers and local planetary militia units to finally destroy the daemon. Even after death, however, its presence lingered, as crops grew sickly and many fields had to be torched to the bedrock to remove the diseased corruption.

††Spewing Tentacles: The mass of tentacles and tubes on a Beast's back can emit different substances each Round. The substances have a range of 10 metres and the Beast must succeed on a Ballistic Skill Test to hit its target. The options are:

†††Trail of Slime: Creatures who come in contact with the Beast's slimy trail must make a Difficult (-10) Toughness Test or any current wounds become infected as they had been caused by a Toxic weapon.