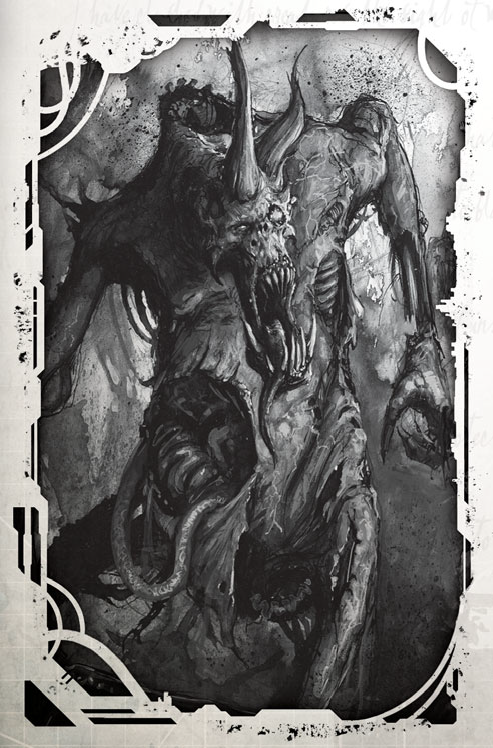 As you enter the large, humid, dimly lit compartment, you are overwhelmed by a horrible, foetid stench even through the filtering systems of your power armour. Huge dripping pipes line the walls here, floor to ceiling, interspersed with wheels a Space Marine's arm span across attached to massive valves. Above the drip and rush of water in the pipes and the normal sounds of a voidship underway, you hear a snuffling noise as if some creature were rooting about for food among the pipes and valves that line the walls. The daemon is here, you can feel its otherworldly presence, an affront to the Emperor and all that is holy. The snuffling stops suddenly, there is a pregnant pause, a moment of silence, and then, with a bellow, the daemon rushes out of its hiding place straight into your group.

There is no Surprise Phase to this combat, as both sides are fully aware of the other. In the split second before Initiative is rolled however, any member of the Kill-team may make a Hard (-20) Forbidden Lore (Daemonology) Test to identify the daemon as it rushes from its concealment. A successful Test reveals that this is Ghulroth the Slaverer, a slow-witted, violent, and incredibly dangerous Herald of the Lord of Decay.

Once the battle is joined, it proves to be a difficult one indeed. Ghulroth uses its strength and size to bowl over or toss about its enemies, something the Herald does with disturbing ease. In its rage it constantly bellows and flails about, lashing out with its massive fists and biting anything that comes near. Although the compartment in which the Herald was hiding is on the large size, the creature's huge bulk takes up much of the space. In the relatively close confines of the compartment it is a truly dangerous adversary. There are few places outside of its reach, and the daemon, the Battle-Brothers, and any serfs they brought with them, make for a crowded combat. In addition to the limited manoeuvre space, as soon as the Herald takes wounding damage, the copious amounts of pus and ichor that seep from its wounds, combined with the already extant puddles of standing water in the compartment, make the deck treacherously slippery. Under these conditions the deck is considered Difficult Terrain, and all combatants suffer the effects as outlined on Table 7-6: Treacherous Environment Difficulty Modifiers on Page 206 of the Deathwatch Core Rulebook.

Ghulroth is a relatively minor Herald of Nurgle, a powerful and stupid beast of roughly humanoid form nearly the size of an Astartes Dreadnought. A mass of muscle and fangs beneath heavy rolls of stinking blubber, its thick, rubbery, grey-green hide is covered in weeping pustules and necrotic sores, and the creature's foetid stench that is equal parts decay, excrement, and foul daemonic ichor hangs around the Slaverer like a shroud. Although roughly humanoid, Ghulroth has a build more simian than human, with large powerful shoulders, long arms, and relatively short legs. While it can stand upright, it tends to move about on all fours.

Ghulroth has little natural intelligence and possesses no subtlety, though what it lacks, it makes up for with childlike enthusiasm for violence and corruption. The Herald attacks by charging into the midst of its enemies and uses its massive strength to toss them about or grapple and pummel them into paste. Despite this mindlessness, it is an incredibly dangerous opponent. Ghulroth's daemonic nature and rubbery hide allows it to shrug off incredible amounts of damage and the nauseating, eye-watering stench that constantly surrounds it makes it difficult or impossible to approach without respirators and eye protection. The Slaverer's bite is venomous, and the deep wounds caused by its rending claws quickly fester and become infected. Also, while not particularly agile, it has incredible straightline speed, can outrun vehicles over short distances, and can close with enemies more quickly than its corpulent form may suggest.

When manifest in the physical realm, Ghulroth spreads disease in a virulent wake with its passing. Typically found on agri-worlds touched by the taint of Chaos, its stench and the numerous fluids that leak from its necrotic flesh spoil food, kill animals, and foul water. Indeed, the Slaverer is attracted to sources of water and has been found wallowing in cisterns, reservoirs, and even in the water tanks aboard voidships unlucky enough to have suffered a warp incursion. Ghulroth, despite its lack of intelligence, has earned the fondness of Grandfather Nurgle thanks to its unchecked enthusiasm for destruction and corruption - what the Lord of Decay has termed "play". As such, Ghulroth is most often accompanied with "playmates"; a small host of Plaguebearers, Nurglings, and Beasts of Nurgle sent by the Lord of Flies to encourage the Herald on to ever greater flights of putrefaction and savagery.

These vile daemons of Nurgle cleave through enemies with their rusted blades, leaving plague and death in their wake.

Skills: Awareness (Per), Psyniscience (Per).

†Infected Wounds: Any injuries inflicted by a Plaguebearer, whether by blade or teeth, become immediately infected. These wounds take twice as long as normal to heal naturally, and a Battle-Brother with an infected wound suffers 1d5 Toughness Damage per day until the wounds are healed. Healing Plaguebearer infected wounds requires a Very Hard (-30) Medicae Test and access to a well-stocked medicae facility.

††Vomit: As a Half Action, a Plaguebearer can vomit a thick, stinking, caustic ichor on any adjacent target with a successful Ballistic Skill Test. The vomit deals 1d10+10 points of Energy Damage. 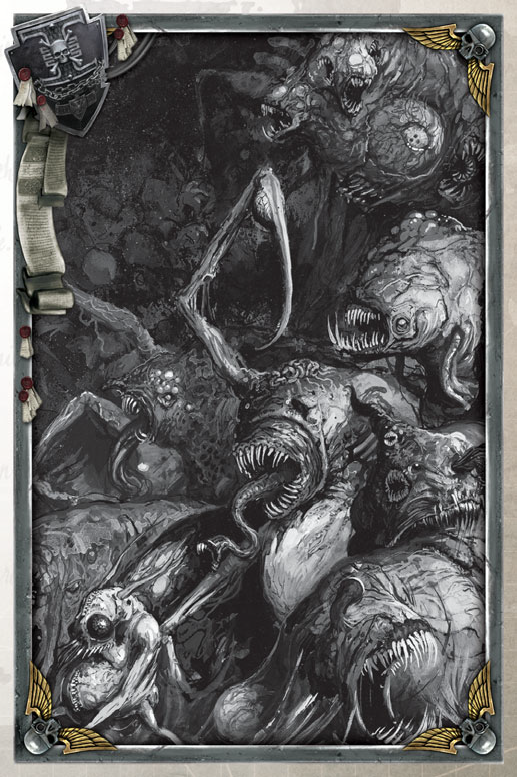 The mischievous little daemons burble happily as they spread their vile pestilence.

†Infected Wounds: Any injuries inflicted by Nurglings, whether by blade or teeth, become immediately infected. These wounds take twice as long as normal to heal naturally, and a Battle-Brother with an infected wound suffers 1d5 Toughness Damage per day until the wounds are healed. Healing infected wounds requires a Very Hard (-30) Medicae Test and access to a well-stocked medicae facility.

This rare daemonic creature is favoured by Papa Nurgle, and its ways are as foul as the foetid stench that constantly surrounds it.

†Disgusting Stench: Ghulroth's smell is so terrible as to be an almost palpable, physical entity that follows the horrible beast wherever it goes. Nothing aside from its pungent odour can be smelled or tasted when it is near, and the stench even affects vision, making eyes water and sting and imposing a -20 penalty on all Perception Tests using sight. A successful Hard (-20) Toughness Test when wearing a respirator will remove the penalties on sight-based Perception Tests. However, the stench is so powerful that respirators do not allow failed Toughness Tests to be rerolled against it. In addition, anyone within 10 metres of Ghulroth suffers a -20 to his Ballistic Skill and Weapon Skill. This penalty can be negated in the same manner as described above.

It is important to note that Battle-Brothers in their power armour are immune to the effects of the Harbinger's stench, although even they can smell a whiff of it through their Osmotic Gill Life Sustainer. Despite their implants and amazing fortitude however, Battle-Brothers who go into battle without their helmets are affected by Ghulroth's stench along with any security forces that the Kill-team may have in company.

††Infected Wounds: Any injuries inflicted by Ghulroth, whether by blade or teeth, become immediately infected. These wounds take twice as long as normal to heal naturally, and a Battle-Brother with an infected wound suffers 1d5 Toughness Damage per day until the wounds are healed. Healing infected wounds requires a Very Hard (-30) Medicae Test and access to a well-stocked medicae facility.