Aynthrexes was summoned to the hive world of Desoleum by Ferrue Fayne of the Blessed Flesh cult. 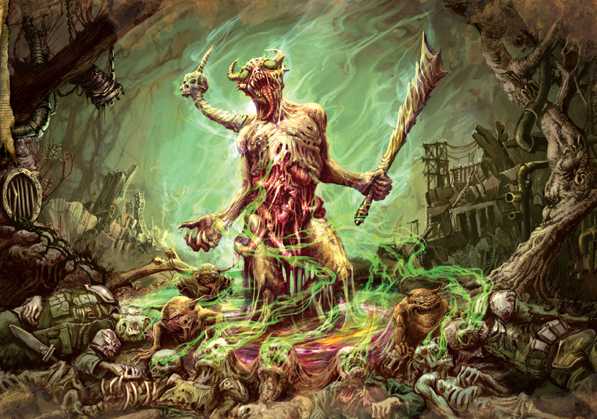 The adventure takes place in a rundown section of the lower hive known as the Gallowsway. It is home to a collection of Carrion Guilds, the families responsible for dealing with the dead of much of Desoleum's impoverished. Riddled with corruption, the Gallowsway has become a thoroughfare for those wishing to pass between the city's lower hive and the lawless Underhive relatively unnoticed. It is also the hub of the lower hive's body trade, where the Carrion Guilds dispose of the thousands of corpses sent from above, the remains of those lacking oath-credits for anything better than a one way trip to the Mortuarius Factorums.

The Gallowsway is more than just a warehouse for corpses and the citizens which tend to them: it is home to thousands of souls too poor to live anywhere else except among the dead. Even by the bleak standards of the lower hive, this is a tangled web of decay and ruin, with precious little power to light its worn streets and meagre rations to feed its populace.

From this rotten foundation, true heresy has begun to fester in the form of an ambitious and tainted Carrion Guilder: Ferrue Fayne. Second son of the Fayne Charnal House, Ferrue, along with his older brother Tormus and his younger brother Darnis, all share a latent psychic gift, rumoured among the Gallowsway residences to be the result of their late mother's illicit congress with unholy powers. Nurturing their gifts, the Fayne brothers were seduced by the Warp and its promise of power, becoming part of the Callers of Sorrow, a major heretical power overseeing many Nurgle cults within the hive.

While Tormus rose to power within the Callers, eclipsing the works of his brothers, Ferrue remained in the Gallowsway and schemed. His chance for power came in the form of a xenos artefact - a strange, asymmetrical device painful to look upon, which greatly enhanced his connection to the Warp and granted him the power to animate dead flesh. With promise in this newfound power, Ferrue formed his own splinter-cult, dubbing it the Blessed Flesh.

As Ferrue's power has grown, so too have the fortunes of the Blessed Flesh, and the cult is now well-established in the Gallowsway. The cult leader has created a lucrative body trade between the lower hive and the Underhive; he steals corpses from the Carrion Guilds for his own needs, then sells their wealth and remaining organs to the Red Walk, a gang located farther downhive. Ferrue's ultimate goal is to amass an army of the animated dead, and rise up from the Underhive in the name of the Plague God, spreading ruin and death in his wake. To this end, he has been preparing for a ritual to summon a powerful Herald of Nurgle to lead his corpse army.

Unfortunately for Ferrue, his brother Darnis has complicated matters by drawing the attention of the Sanctionaries. Much in the same way that Ferrue languished in the shadow of Tormus and the Callers of Sorrow, Darnis was jealous of his older brother's power. So much was his desire for attention and power that he stole a piece of the xenos artefact and tried to animate the dead himself. The horrific results are what has drawn the Acolytes to the Gallowsway, providing the first glimpse into the danger Ferrue and the Blessed Flesh pose to Desoleum.

Aynthrexes hears the Warp-ripples of Ferrue's call, and eagerly looks forward to sharing Father Nurgle's delights with mortals across Hive Desoleum. With each soul he devours, he gains in pestilent strength.

Newly Summoned: Aynthrexes is fresh from the Warp, and so his power levels are lower than a fully-strengthened Herald. The GM should feel free to adjust his powers if desired to properly challenge the Acolytes and their allies.

Embodiment of Decay: Mere exposure to Aynthrexes' presence can rust and degrade even the strongest materials. While within 10 metres of the Herald, all equipment, weaponry, and armour functions as though it were Poor craftsmanship, regardless of its actual craftsmanship.

†Nauseating: A character who fails a Fear test against Aynthrexes does not roll on Table 8-11: Shock. Instead, the character is Stunned for one round per degree of failure, as he doubles over and retches uncontrollably. The character still suffers all other effects of failing a Fear test, such as possibly gaining Insanity points. If the character succeeds on the Fear test, he suffers one level of Fatigue as he contends with the bile rising in his throat.