In the Warhammer 40,000 setting, the Company of Misery are a warband of Chaos Space Marines that may be followers to Nurgle.

Members of the Company of Misery include: Engvarr. 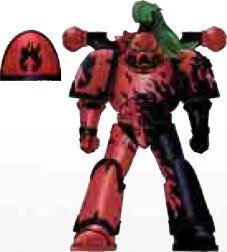 'Let us show these simple-minded fools that hope is less than worthless.'

Since the degradation of their gene-seed stocks in M32, the Chapter known as the Desolate Brotherhood found themselves assigned to impossibly dangerous and undesirable duties, including death worlds, space hulks and quarantine zones. Each time they believed they had won a reprieve, they were sent on an even more hazardous mission, plunging them into a spiral of dissolution and despair. After a catastrophe in the acid swamps of Misery, the Chapter took a new name and left their duties behind, forever becoming sworn enemies of the Imperium and the illusion of hope.

The fortress planet of Helwynd, its gradual corruption hastened by the renegade Space Marines of the Company of Misery, declares itself the heartworld of the Empire of Despair. Helwynd slowly pollutes the other worlds in system with its bleak message, each broadcast robbing hope and loyalty from all those who hear it. The doom-mongering reaches not only the divinatory arrays of the local Schola Progenium but also the keen ears of the Flesh Tearers on the nearby feral planet of Cretacia.

Both the Flesh Tearers and the Militarum Tempestus hasten to Helwynd with all speed. The Cretacians get there first, though to their mounting fury their Drop Pod assaults are swiftly countered by the Firestorm Nexuses that slide out from hidden bases in the planet's hillsides. Even the Stormravens and Thunderhawks that enter low orbit are forced to disengage by blistering fusillades of lascannon fire. The planet's defence net seems all but impregnable and, for a time, the Flesh Tearers are held at bay.

When the drop ships of the 3rd Alphic Jackals enter orbit, Tempestor Prime Vigilian volunteers his men for an orbital drop that he believes will thwart the defences. Turning his ships so their hulls are parallel to the planet's surface, Vigilian orders his Scions to cram themselves into each of the ship's starboard airlocks before forcefully ejecting them towards the planet.

Though each trooper is protected from atmos-burn by little more than carapace armour and an ionised body-shroud of pressed alloy, the Scions hurtle towards the ground in tight formation. Vigilian's gamble pays off, for the individual soldiers are small enough to evade notice from the automated defences below, and their energy signatures are light enough to register as a shower of space debris.

Discarding their shrouds once they enter the atmosphere proper, the Scions activate their grav-chutes and glide through the night to land undetected in the heart of the enemy complexes. Here the 3rd Alphic Jackals are in their element, disabling one Nexus after another and holding the facilities against the rebel forces with grim resolve.

As the defence network falls, the contrails of Flesh Tearers ships scar the skies once more, and the Space Marines make planetfall in great number. The carnage that follows is spectacular as the wrath of Cretacia's finest rips apart rebel soldier and renegade Space Marine alike. Many of the planet's would-be rulers withdraw in the face of the fearsome assault, but they soon find their routes of retreat have already been cut off by cordons of Militarum Tempestus troopers. Those few vessels that attempt to escape off-world are shot down by their own Firestorm Nexuses, each now taken over by Imperial crews.

The rebel forces are exterminated to a man. When the Space Marines holster their bloodied weapons and gather to make for their ships, the Militarum Tempestus have already left without a word.

Imperial Armour 13: War Machines of the Lost and the Damned (2014), p23 — Woeful Blasphemies of the Traitor, Renegade, Heretic and Mutant

The Forge Moon of Keziah, in the strategically vital Agathon system, falls into an unnatural eclipse during which its population is driven to murder and madness in an endless night of horror. The dread forces of the Tenebrae and Company of Misery reign as dark kings amid the nightmare, and the baleful black light of the 'Witching Moon' that Keziah has become spreads calamity and warp-tainted phenomena wherever it now falls, threatening the entire star system. The first Imperial attacks by the Astra Militarum, squadrons from Battlefleet Ultima and the Inquisition are hurled back in tatters by the madness of the black light and the warp-filled savagery of the defenders. It is only by the unexpected arrival of the Charnel Guard Chapter, accompanied by a sacred band of the Adepta Sororitas Order of the Black Sepulchre bearing the holy relic known as the Book of Counted Tears before them, that the imminent loss of tens of billions of lives on Agathon Prime is prevented, and the insanity-inducing radiance of the Witching Moon is held back. The Charnel Guard lead a fresh assault as further Adeptus Astartes including the Iron Hands, Storm Lords and Angels Porphyr, and Adeptus Mechanicus reinforcements arrive, fighting a brutal battle of tank and gunship clashes across the web of soaring metal canyons which craze the moon's surface and chamber-by-chamber Zone Mortalis actions to purge Keziah of the shadow that has befallen it. The Chaos Astartes inflict fearful losses on their besiegers before they are driven into the deeper darkness of the Warp. In the wake of their retreat, all life is purged from Keziah before it is given back to the hands of the Machine Cult for tech-exorcism and eventual reclamation. 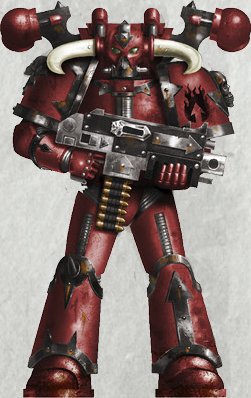 Engvarr, the Destroyer of Dreams, first blade of the Misericordians

Since the degradation of their gene-seed in M32, the Desolate Brotherhood found themselves assigned to impossibly dangerous duties. Each time they won a reprieve, they were sent on an even more hazardous mission, plunging them into a spiral of dissolution and despair. After a catastrophe in the acid swamps of the world Misery, the Chapter took a new name and left their duties behind, forever becoming sworn enemies of the Imperium and the illusion of hope.