In the Warhammer 40,000 setting, the Cleaved are a group of Chaos Space Marines that appear to be devoted to Nurgle.

Members of the Cleaved include: the Grave Harbinger.

These mysterious warriors first appeared during a raid on Magma Cordelian. A strange, oil-like blood oozes from the joints of their armour. Battlefield reports suggest that the Cleaved have an exceedingly high pain threshold, sustaining seemingly mortal wounds and fighting on to victory. What remains of the Chaos Space Marines within their sealed armour, none can say.

'Call with all your soul, little one. Call and we shall answer.'

The pallid warriors known only as the Cleaved first appeared during the insurrection of Magma Cordelian. The loyalist guardsmen of the Iridian 334th had pushed their way into the rebellious Planetary Governor's palace after a sustained bombardment. The regiment's Primaris Psykers realised too late that the architecture of the Governor's keep was actually a gigantic summoning circle. Amongst the choking fumes, the insurrectionists conjured reinforcements - not Daemons, but Chaos Space Marines with strange, oil-like blood oozing from the joints in their armour. Though the new arrivals were massively outnumbered, the power-wrmoured warriors exhibited an incredibly high pain threshold, fighting on through mortal wounds to eventually repel the Iridian attack and secure the planet for the insurrectionists.

A Dark Angels' investigation of a space hulk newly materialised out of the Warp discovers strong elements of the renegades known as the Cleaved. The ensuing fight is won when Assault Squads, advancing behind a trio of Dreadnoughts, get close enough to set cyclonic charges in the engine rooms. 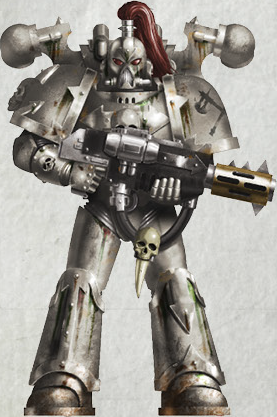 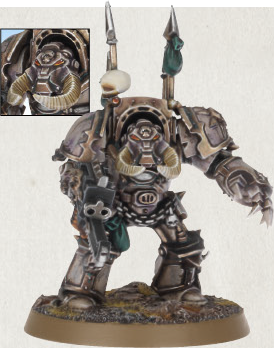 Chaos Terminator of the Cleaved

'Call with all your soul, little one. Call and we shall answer.'
— Battle cry of the Cleaved