In the Warhammer 40,000 setting, the Carrier is a Daemon Prince of Nurgle who appears in Fantasy Flight Games' Rogue Trader role-playing game.

The Carrier's original name, Josephus Mallone, is a tribute to the real-world "Typhoid Mary", Mary Mallon: his Joseph to her Mary. 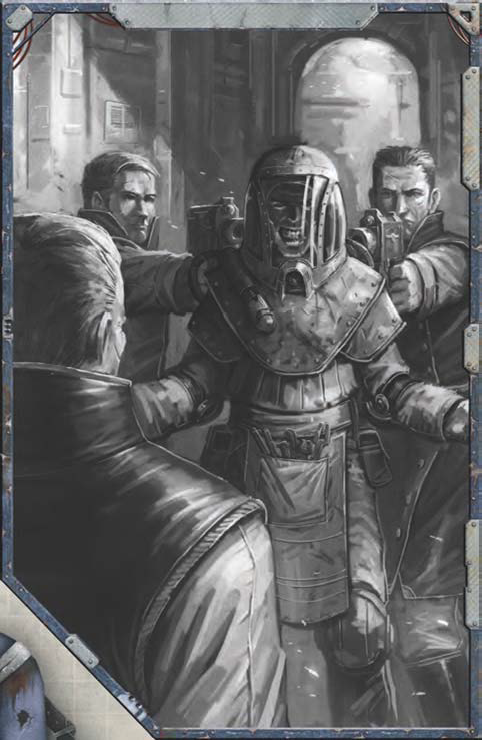 Once a common voidsman in the Imperial Navy, the Daemon prince now known as "The Carrier" began life as Josephus Mallone in the Calixis Sector. At void from his earliest recollection, Mallone was, by all accounts, a terrible voidsman. Known throughout Battlefleet Calixis as unreliable, unrepentant, and a serial malingerer, he gained a reputation as the laziest man in the battlefleet, a title he accepted with honour. While that appellation was, perhaps, an overstatement, Mallone was a man who cared little for work and instead made his way through life avoiding it, a task easier than one might believe aboard a massive Imperial Navy voidship. For five decades he coasted in the belly of one voidship after another, avoiding superiors and as much labour as possible until a simple accident changed his life forever.

During a fateful voyage in which the ship's Gellar Field failed and suffered a minor Warp incursion, Mallone fought Daemons of Nurgle as part of a security party. During the pitched battle, Mallone contracted a disease from one of the Daemons. Strangely, some would say miraculously, he showed no signs of illness or taint, and his affliction went unnoticed. While he did not suffer from the disease, he carried it, and over the next few decades spread the taint of Nurgle among the battlefleet. Thousands of voidsmen and Imperial Navy functionaries died over the years, consumed from within by the awful plague Mallone unknowingly carried. Eventually, Mallone was discovered by agents of the Plague Lord and they approached him while he was in port. They informed him that he had been doing Nurgle's work for decades, spreading disease among his fellows. Papa Nurgle was pleased, they said, and offered him a proposition. Nurgle would give Mallone a life of eternal ease, away from the demands of naval life with its watches and hectoring bosuns, in exchange for continuing to spread his disease. He accepted, out of a sense of curiosity and idleness more than any real dedication to the Ruinous Powers.

Now, centuries later, he lives among the chaotic worlds of the Void Dancer's Roil and serves his master with glee. While he kept his human appearance upon apotheosis, within he is a roiling mass of poison and disease. His laziness was, if anything, intensified upon becoming a Daemon, and it is widely said that he would be one of Nurgle's most powerful servants if only he could be bothered. None of this matters to The Carrier; he is content to spread his plague and do the will of Nurgle as he sees fit. He does this by appearing aboard voidships lost in the Warp and offering them a way out of the howling Chaos of the Empyrean. Surprisingly, most are desperate enough to take the help of a shabby, ill-looking voidsman who simply manifests aboard and offers safe passage with an easy smile. Even ships of the Imperial Navy have fallen prey to this. True to his word, The Carrier guides each and every ship safely from the Warp, disappearing as soon as they transition back to realspace. Of course, by that time he already done the festering work of Nurgle, and the unfortunate vessel has also become a carrier of the Plaguelord's pestilence.

Traits: Daemonic, Dark Sight, From Beyond, Strange Physiology, The Stuff of Nightmares, Touched by the Fates, Unnatural Strength (x2).

Psychic Techniques: All Telekinesis Techniques, Realm of Decay, Breath of the Plaguelord.

†Infectious: Whenever a living creature suffers Damage from the Toxic Quality of this weapon, it also suffers 1d5 Toughness Damage. Any creature slain by this weapon rises as a Plaguebearer (see page 141).