In the Warhammer 40,000 setting, the Judged are a collection of thirty Space Marine chapters that were sent into the Eye of Terror on the Abyssal Crusade. Of these, many turned to Chaos worship, including the Brothers of the Anvil that became the Deathmongers and wear the symbol of Nurgle on their pauldrons.

Members of the Deathmongers include: Brother Bellicor. Other warbands connected to the Judged include the Flylords, the Grey Death, Lords of Decay, Talons of Anathrax, and Vectors of Pox.

The 37th Millennium saw thirty thousand Space Marines embark on a redemptive crusade into the Eye of Terror. Barely half returned, and many of those left behind were horribly altered, caught in thrall to the very forces they had sought to purge.

After the Ecclesiarchal Purges of 312.M37, Saint Basilius the Elder was ascendant. His 'puritas divisions' included several Chapters of Space Marines, each of which was extremely fierce in their vigilance - wherever a mutant or cultist was found, an execution would immediately follow, regardless of age, sex, station or circumstance. For once, the Ecclesiarchy worked in concert with the Inquisition and the Adeptus Astartes across the entire Segmentum Solar, making it mandatory for the populace to inform on anyone they suspected to bear the spoor of Chaos. Those few civil liberties the Imperial citizenry had left were stripped back even further, and countless false allegations were made, but the tactic was ultimately effective; the incidence of insurrection dropped to almost nil.

The Tides of Change

Then came Warp storm Dionys. The wrenching twist in reality caused Warp rifts over dozens of systems, and its echoes rippled along the spiral arms of the galaxy as it raged through the Empyrean. Records of mutation and cultist activity quadrupled overnight. Worse yet, it was not only the citizens who were affected by the sudden influx of Chaos. Many of the Space Marine Chapters with home worlds in the path of the Warp storm found that the secret imperfections in their gene-seed were writ large upon their new recruits, giving rise to a wave of disturbing manifestations both physical and psychological.

When the Ecclesiarchy heard of this sinister turn of events, Saint Basilius demanded that all those Chapters of the Adeptus Astartes whose home worlds had been touched by the Warp storm be rendered unto his judgement. Such was the elder's influence with the High Lords of Terra that within a year this had come to pass. After a series of stringent tests and prognostications, hundreds of Chapters were deemed unaffected by the Warp storm. No less than thirty were found wanting.

The Judged, as these fallen Chapters came to be known, volunteered for a redemptive crusade. The most militant of their number demanded the right to purify their tainted flesh in the fires of battle, to make a noble end from tragic misfortune. To the surprise of his closest advisors, Saint Basilius agreed to their proposal. He saw it fitting to send the accursed into the Eye of Terror, taking the fight for the Imperium's future to the Daemon worlds inhabited by the Chaos Space Marines.

A representative from each of the doomed Chapters held an emergency Council of Dismay to discuss the proposed crusade. After scant hours of debate, they acquiesced to Basilius' demands, for they believed that martyrdom was preferable to an existence of suspicion and doubt. The last few days of 321.M37 saw a solemn procession of strike cruisers and battle barges pass through the Cadian Gate into the Eye of Terror, relay systems dormant and heraldic colours obscured by black mag-plates. One by one, the Chapters of the Judged disappeared into the iridescent dust nebulae that surrounded the Eye, flickering out of reach from Cadia's astropaths within a single night.

Less than an hour after the Judged had made transition into the Eye, a warfleet of misshapen battle craft encrusted with the sigils of Chaos emerged from the dust clouds to intercept them. Torpedoes ripped open hulls and blew out docking bays, and lance fire crackled through the ether to stab through the leviathans of the Imperial fleet. Soon, the battle raged so fiercely that all cohesion amongst the Judged fleet was lost. The sheer amount of destruction meted out caused a great turmoil in the Warp, and the fabric of space itself began to tear open. Just as the Chaos fleet retreated, the ships of the Judged were scattered to the furthest corners of the Eye.

Were they ever to be committed to parchment, the journeys of the Judged could fill the Great Elucidan Library twice over. Each tale has a sorry ending, for one does not venture into the Eye without courting grievous misfortune.

Upon the crone world of Belial IV, the Brothers of the Anvil scoured the tumbled spires of the original Eldar empire, only to be brought to battle and eventually captured by the xenos Kabalites that searched the ancient planet for arcane artefacts. After a year of nightmarish ordeals in the Commorite arenas, the broken remains of the Brothers of the Anvil slaughtered their way back into realspace, where they killed every living thing they found. Chapter after Chapter fell to the perils of the Eye, for the Abyssal Crusade had entered a hell from which very few emerge unscathed.

The tales go on, though few outside the mysterious Black Library have any idea of their extent. The Adepts of the Administratum outright deny any link between the loss of the Judged and the increased frequency of Chaos Space Marine raids thereafter. All that is known is that, almost 800 years after the Abyssal Crusade began, the remnants of some of the Judged Chapters returned from the Warp. They could barely contain their fury when they were detained by agents of the Inquisition and tested for the taint of Chaos. As they passed every test, a horrible truth came to light. Saint Basilius still lived, and the testimony of Konvak Lann, Chapter Master of the Vorpal Swords Chapter, revealed him as a false idol, guilty of sending innocents into the jaws of damnation.

The Vorpal Swords led the other survivors, blazing with righteous anger, to penetrate the defences of Basilius' palace. They found the unaccountably ancient saint and finally revealed Basilius' true nature as an apostle of Chaos. Basilius and thousands of his followers were slain, his shrines destroyed, and every relic and tome of his creed burned, as if he had never existed. Even so, the full extent of his corruption and the reach of his influence has never been discovered.

Warpstorm Dionys ripples across the galaxy, its ghastly energies polluting a wide swathe of star systems. In addition to billions of Imperial citizens, no less than thirty Space Marine Chapters are judged by the charismatic Saint Basillius to be tainted. The Ecclesiarchal lord gives a choice to those so judged - seek redemption in the Eye of Terror or be exterminated. Without exception, the Judged Chapters choose to embark upon a redemptive crusade aimed at purging the Daemon worlds of the Eye of Terror. Within that great Warp rift, some of the Chapters are lost forever or destroyed, and a few turn renegade in order to survive. The most resolute return to the Imperium nearly 800 years later, and discover that their accuser, Saint Basillius himself, is a servant of Chaos. The corrupted saint's demise is swift and bloody.

Warp storm Dionys ripples across the galaxy, its empyric energies polluting a swathe of star systems. In addition to billions of Imperial citizens, no fewer than thirty Space Marine Chapters are judged by the charismatic Saint Basillius to be tainted. The Ecclesiarchal lord gives a choice to those so accused - seek redemption in the Eye of Terror or be exterminated.

Without exception, the condemned Chapters - known as the Judged - choose to embark upon a redemptive crusade aimed at purging the Daemon worlds of the Eye of Terror. Within that great warp rift some of the Chapters go missing or are destroyed, whilst others turn renegade in order to survive. The most resolute of the Judged return to the Imperium bloodied but unbowed nearly eight hundred years later, and discover that their accuser, Saint Basillius himself, is a servant of the Ruinous Powers. The corrupted saint's demise is swift. 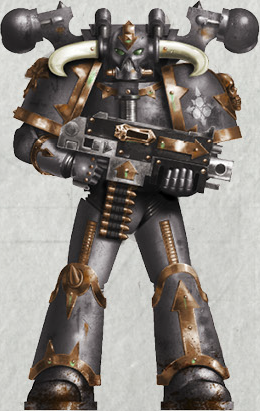