Jonas Whitespore is a Champion of Nurgle in the Old World setting of Warhammer Fantasy, appearing as an opponent in the introductory adventure "The Oldenhaller Contract" in the first-edition Warhammer Fantasy Roleplay rulebook.

A natural cave weakly illuminated by moonlight filtering in from a concealed entrance. There are two rowing boats pulled up onto the gravelly beach, and a third moored to the jetty near the end of the cart track. In the room are six figures in filthy brown hooded robes, and one is an albino and is surrounded by a dense cloud of bloated flies.

Four of the cultists are standing in a circle, and seem to be conducting some kind of ritual. The other two are standing by the entrance from 19, and are armed with swords.

The cultists are in the process of summoning a Beast of Nurgle. The gamesmaster should control the timing of the event; the beast should have appeared if the characters spent a long time in discussions with the Huydermans, or if they have been generally slow in getting through the adventure. Otherwise, the creature will appear in D3 rounds after they enter the chamber. The cultists will attempt to complete the summoning rather than defend themselves, but should one or more of them be struck, the summoning will be broken, and all the cultists will fight for their lives.

Albino
Jonas has white skin and red eyes.
Cloud of Flies
He is permanently surrounded by a great swirling mass of corpse flies, which give any hand-to-hand combat opponent a -10% to hit modifier as the flies block his vision, buzz into his mouth and nose etc.
Hideous Stench
Jonas smells very, very bad. The stench affects an area with a radius of 6 yards. All non-cultists within this radius must make a Toughness test or lose 1 point of Strength for D6 turns.

Jonas is also a powerful magician, and can cast the following spells:

Note: Jonas' career as a Champion of Chaos will be one of the subjects to be covered in the forthcoming Realms of Chaos supplement. For the purposes of this introductory scenario, you can ignore those of his specialist attributes which are not covered here.

The two cultists guarding the doorway into 19 are both armed with short swords. All the cultists will fight to the death if engaged in hand-to-hand combat, and cannot be forced to leave combat.

If the cultists summon a Beast of Nurgle before the characters have escaped from the complex, it will appear in the middle of the circle of cultists, and will be directed by Jonas to attack the most powerful-looking character or group of characters. 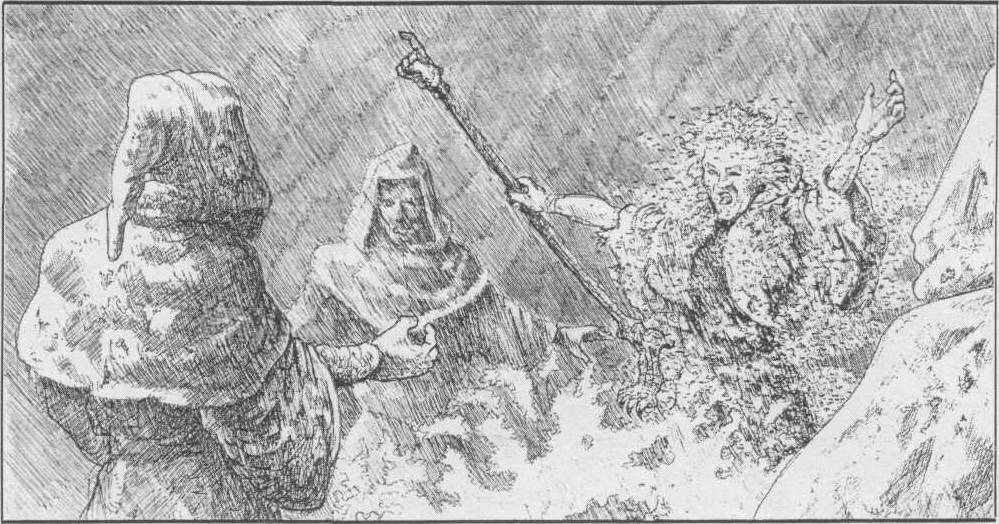