In the Warhammer 40,000 setting, a Plague Claw is a tainted tool appearing in Fantasy Flight Games' Black Crusade role-playing game. 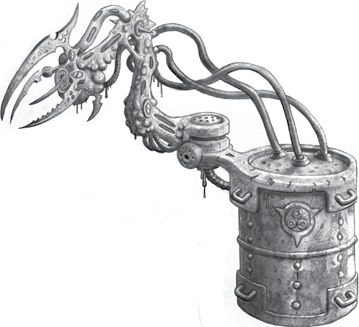 A twisted fusion of rotting flesh and corroded machinery, a Plague Claw launches a pulsating tube with a barbed claw at the end that punches through armour and flesh and spews all manner of toxins directly into the target's body.

A Plague Claw grants a +10 bonus on Medicae Tests for the Diagnose and Chem-Use Special Uses of the Skill, and can be used to store and hold samples of various plagues, toxins, and other foul concoctions pleasing to the Lord of Disease. A Heretic with a Plague Claw always counts as being armed with a weapon with the Weapon Profile: (Melee; 1d10+2 I; Pen 2; Decay (3), Tearing). This weapon can be loaded with any Disease or toxin as a Full Action; until the end of the encounter, any character who suffers Damage from it suffers the effects of the loaded malady. Only a character dedicated to Nurgle can wield a Plague Claw. A Heretic does not need to have the Mechanicus Implants Trait to have this cybernetic installed.