In the Warhammer 40,000 setting, Jibberjaw is a giant Chaos Spawn of Nurgle that participated in the Siege of Vraks.

Forge World both wrote the background and rules and produced the model for this particular character, as part of their Imperial Armour series of publications for Warhammer 40,000.

Jibberjaw is associated with The Tainted. 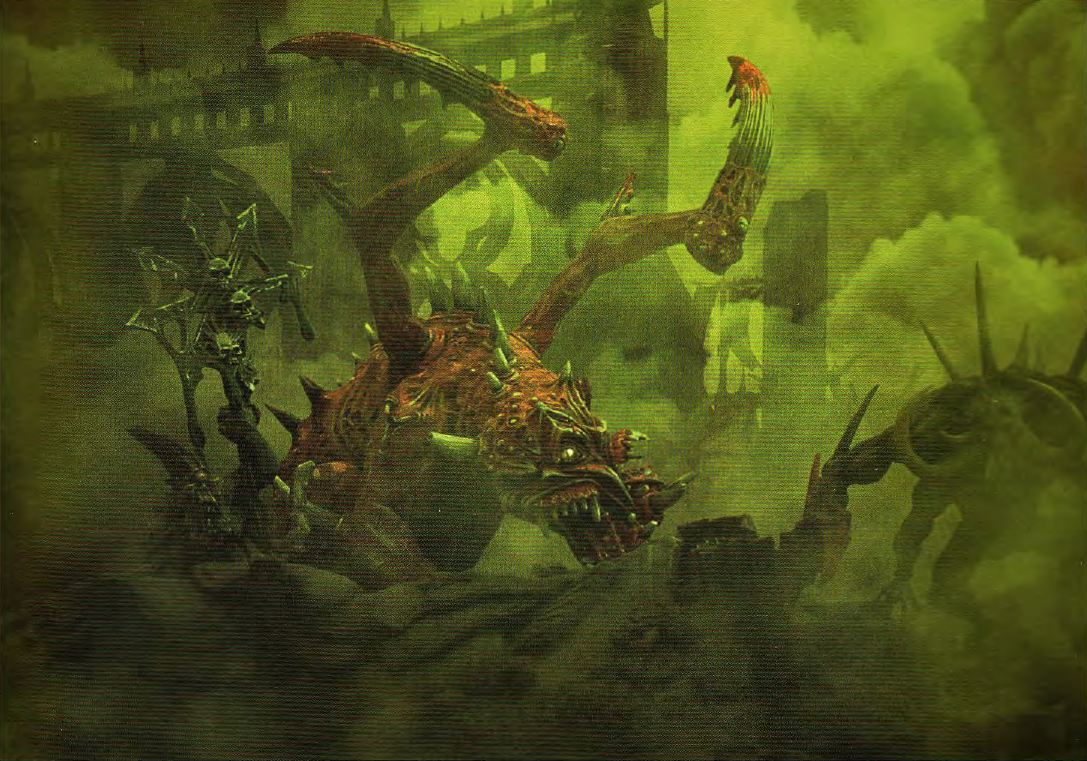 With the arrival of the reinforcing renegade factions on Vraks, the servants of Chaos brought with them numerous bizarre and dreadful war engines and the heinous taint of the Warp to the conflict. But neither Daemon nor machine encompassed the limits of the nightmarish weapons they employed. A terrifying case in point was the foul creature named 'Jibberjaw' by those Imperial forces who survived a confrontation with the beast.

Believed to have been brought to Vraks by the renegade Adeptus Astartes faction known as the Tainted, Jibberjaw was a gigantic Chaos Spawn, a creature so afflicted by the horrors of mutation as to be unrecognisable in origin and no longer subject to the bounds of physical laws or sanity. This foul creature, whose flesh constantly bubbled with necrotic wounds and fanged mouths which sagged open and sealed shut from moment to moment, and that ceaselessly gibbered and cackled with an almost human madness was the size of a tank, and proved able to rip apart the heaviest armour with its huge claws. Blessed by the Plague God, those near it often died without even touching the creature, succumbing either to sudden diseased contamination or driven to immediate despairing suicide by its continuous insane prattling.

The Tainted were myserious in origin, and seemingly obsessed with both the worship of the Lord of Decay in his aspect as the Father of Despair and the occult corruption of flesh. They quickly became prominent for their engagement with the Vraksian renegades. It is believed to be the whisperings of their leaders that worked on the misery and horror of the war and converted so many of former Cardinal Xapahan's followers into forswearing themselves body and soul to Nurgle. The Tainted are believed to have brought a 'rotted circus' of befouled creatures to Vraks with them, of which the Jibberjaw became the most infamous, as well as the baleful means to create more twisted Chaos Spawn and other decaying mockeries of life. For this reason, those savants of the Ordo Malleus who have studied the closing stages of the Siege of Vraks also attribute the vile Plague Ogryns to their arts.

Transport: Jibberjaw may not be transported inside a transport vehicle.