Plaguestrangler Vilestench is a Champion of Nurgle in the Old World setting of Warhammer Fantasy.

He rides on a Palanquin of Nurgle. 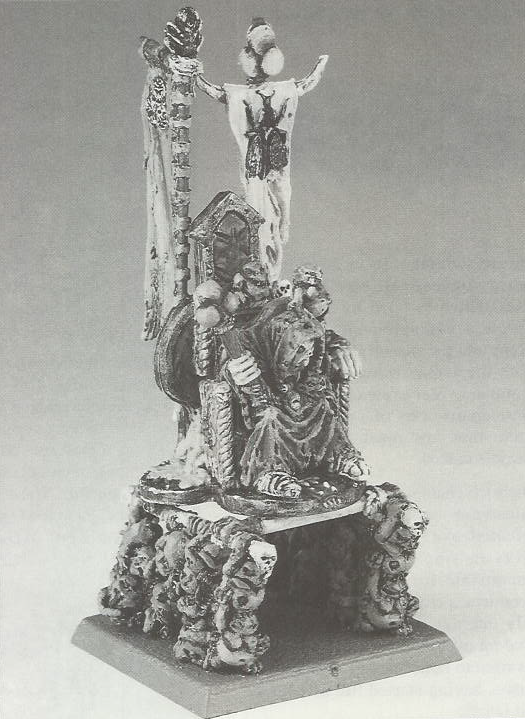 Each Chaos God gifts his Champions with special rewards. Khorne for example may reward a champion for particularly impressive kills upon the field of battle and will gift him a suit of blood red armour. Nurgle will reward his champions with diseases and plagues but sometimes Nurgle's champions deserve more and for these special champions Nurgle reserves his most powerful reward - Nurgle's Palanquin.

Nurgle's Palanquin is a throne of putrid vileness carried aloft upon a litter which is borne by Nurglings. Nurgle's champion sits upon the throne and commands awe and respect from the lesser warriors under his command. Very few champions are considered worthy of a palanquin and those that are must be favoured warriors indeed.

One such champion is Plaguestrangler Vilestench who single handedly defeated over three score of High Elves in single combat. He was responsible for the destruction of Averheim, a city in Northern Norsca, in only one day. Plaguestrangler has lived for over three thousand years and has risen to fame amongst the ranks of Chaos, having started life as a lowly cult fanatic.

Vilestench's most memorable feat, and the one that earned him the Palanquin, was when he began the Black Fever in the town of L'anguille. Plaguestrangler sailed his Plaguefleet to Brettonia, some five hundred years ago, and passed the plague onto some local peasants and farmers who walked to the Brettonian port and began an epidemic of the deadly contagion. Vilestench defeated several Brettonian armies before Nurgle decided it was time for him to leave and return to the Realm of Chaos to collect his reward. Since then Plaguestrangler Vilestench has commanded great respect from those who fight for him and has become a feared sight upon the battlefields of the Warhammer world.

Plaguestrangler now commands an army which is storming down from the North towards the Chaos Dwarf city of Huzkuluk and the High Pass across the Worlds Edge Mountains into the Empire. If Vilestench were to reach the lands of Kislev there might be another plague infestation in the city of Praag for Nurgle to gloat over the other Chaos Gods with.

If you choose Plaguestrangler Vilestench to be your army general then he replaces the general given in the army list from Warhammer Armies: Chaos.

The profile (below) includes the Nurgle Palanquin, the Nurglings which bear it and Plaguestrangler who rides upon the Palanquin in battle. This is to make things easy to find in the heat of the game.

Weapons/Armour: Plaguestrangler wears Heavy Armour and is armed with a Sword and the Plague Sceptre of Nurgle. Vilestench's profile has had the +1 Toughness attributed from being a Champion of Nurgle already included.

Rides: Plaguestrangler rides to battle upon the mighty Nurgle Palanquin (see below).

Magic Items: Plaguestrangler is a Chaos Lord and as such may have three magic items or Chaos Rewards. These must always be the Magic Item Plague Sceptre of Nurgle and the Chaos Rewards: Nurgle's Palanquin and Nurgle's Cloud of Flies.

Special Rule: Noisome Stench. Plaguestrangler has not washed since he was twelve years old and as such has attracted a rather nasty smell over the last few centuries. The stench is so bad that it can knock out opponents if Vilestench gets close enough.

When Plaguestrangler is in combat with a unit all enemy in base to base contact with him must roll a dice. This dice roll is made before any other attacks. On the roll of 1 they are knocked out by his Noisome Stench and cannot attack this turn. They will not count as casualties but they can only be attacked by the Nurglings this turn.

Causes Fear: Nurgle's Palanquin is a disgusting and obscene object to look upon and as such it causes fear. Foes charged or wishing to charge the Palanquin must first pass a fear test otherwise they will break and flee, or will be unable to charge.

March Moves: The Nurgle Palanquin may not make a march move and therefore can only move 4" per turn. This may be doubled to 8" when the Palanquin charges.

Daemonic Animosity: The Nurglings are subject to Daemonic Animosity. They must test for Daemonic Animosity if there are Daemons from a rival Chaos God within 12" at the start of the Chaos players and they are not in combat. They may test using Plaguestrangler's Leadership characteristic. See Warhammer Armies: Chaos for more details.

War Altar: The Nurgle Palanquin is a huge inspiration for Chaos troops in battle. All Nurgle units within 6" of the Palanquin are immune to all psychology tests and may add +1 to break tests.

Distributing Damage: When the Palanquin is hit in hand to hand combat or shooting then roll a die for each hit and consult the relevant table above to determine where the blow has landed.

The Plague Sceptre of Nurgle bears hideous markings and its metallic surface is etched with plague encrusted sigils of contagionic power. Locked deep inside the sceptre is a spell of disease and destruction.

Champion or Sorcerer of Nurgle Only

Champion or Sorcerer of Nurgle Only

In this scenario the Chaos invaders have just made a landing on the north coast of Ulthuan. The first encounter that they have is with the hardy residents of a nearby High Elf coastal settlement. Quickly the Elves sound the alarm and prepare for battle but the forces of darkness are almost upon them...

Set up the board as shown on the map (over) and set up your forces in their respective deployment zones. The High Elves set up first and move second to represent the surprise attack of the Chaos forces. This battle lasts for five turns. The Chaos player aims to take the village by getting a unit with less than 50% casualties into it at the end of the game. If this is achieved he gains +5vp's. The High Elf player aims to stop this happening. If he does, he gains +5vp's of his own.

Select an army of up to 2000pts from the following lists:

a) Characters
The Chaos Army must be led by Plaguestrangler Vilestench, the Hero of Nurgle. He counts as the General of the army and has special rules as described earlier. You may select one Chaos Hero if you wish, but all other characters must be Champions allied to Nurgle. You may have one Champion per unit. You may also select a Sorcerer of up to 2nd level, who may be Nurgle.

Plaguestrangler has been sent on this mission as a representative of Nurgle, accompanied by his warband of Daemons and Chaos Warriors. However, while the nature of the alliance is meant to be co-operative, Plaguestrangler knows that he must attempt to win glory for his master, at the expense of Slaanesh, whatever the cost! To protect himself from assassination, Plaguestrangler is always accompanied by a Daemonic bodyguard of Plaguebearers, and always carries the mystical Plague Banner, a potent relic of disease and death.

Weapons/Armour: Plaguestrangler is armed with a Sword and Shield, and wears Heavy Armour.

b) Chaos Warrior Warband
The army may include units selected from the following list:

c) Allied Daemons
The army may not include Greater Daemons. Lesser Daemons may be chosen as follows:

d) Magic Items and Monsters
Magic items up to a value of up to 50pts may be used. Only the following monsters are allowed.