Not even Plaguebearers are immune to Nurgle's diseases. Those infected with the Chortling Murrain lose their sombre attitudes and instead develop a compulsion to entertain. Called Sloppity Bilepipers, these individuals act as Heralds of Nurgle... before the disease dooms them. 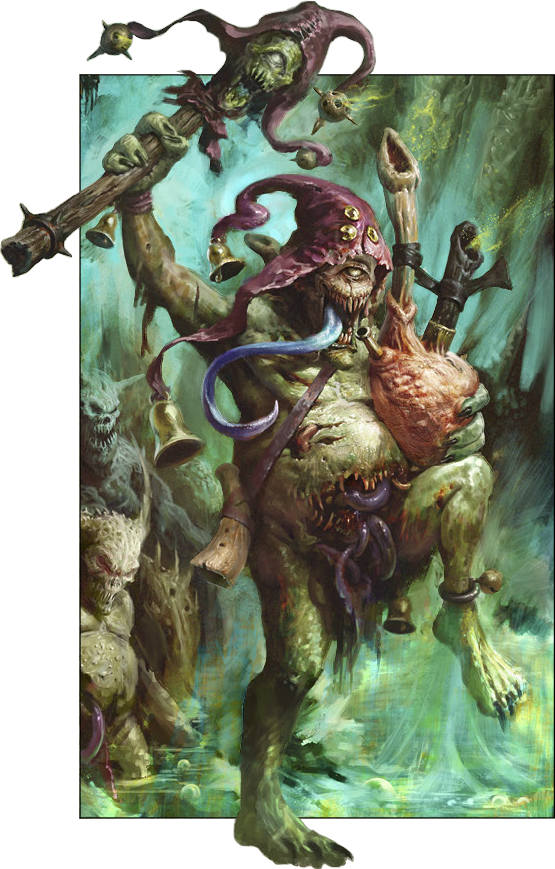 Not all of the plagues created by Nurgle turn out as planned, many of them being just a minor inconvenience rather than a world-sweeping contagion. Some attempts prove even more disastrous, such as the pox that was meant to gnaw flesh but instead proved to be something of a disinfectant. That catastrophe was never spoken of again, not even by the boldest of Great Unclean Ones. The disease that eventually became known as the Chortling Murrain was at first believed to be a damp squib, but, when it was re-purposed as a punishment, it swiftly became one of the Lord of Plagues' favoured creations.

The Chortling Murrain becomes truly infectious when it settles into a Plaguebearer. Ever the most organised and glum of Nurgle's creations, a Daemon infected with Chortling Murrain - usually as a result of failing in his counting - abandons his characteristic shuffling gait and steady, measured droning as he falls into what can only be described as a comedic fever. So infected, he capers and quips, jabbering light-heartedly at any who will listen. Amidst the dour, endless counting of Plaguebearers it is only too obvious to pick out one who is so afflicted.

Once the symptoms of the Chortling Murrain fully manifest, its victim is given the title of Sloppity Bilepiper and a new task. Gifted with a gutpipe and marotter, these budding Heralds are sent to amuse Nurgle's Tallybands as they march to war. Admittedly, the antics of the Bilepipers wholeheartedly fail to impress the gloom-ridden Plaguebearers, but Great Unclean Ones and Nurglings find the steady stream of jokes and nonsense-songs hilarious. The Greater Daemons unleash booming belly laughs that send rotted innards splashing out in waves, while Nurglings shriek with laughter. Even Beasts of Nurgle flop about with extra enthusiasm, not understanding but eager to join the fun. Invigorated by the Bilepiper's exploits, Great Unclean Ones and Nurglings set about their vile work with extra vigour.

Unfortunately for Nurgle's foes, Daemons with the Chortling Murrain are infectious, and the warp-borne disease can cause mortals and the Daemons of other gods to laugh with ever-growing hysterics until their hearts burst or their sides split open. Despite their augmentative roles, Bilepipers themselves are doomed, for the Chortling Murrain always gets the last laugh - or not. As the disease goes into remission and the bearer fails to raise the least of titters from even the jolliest of Great Unclean Ones, the Herald is subjected to cruel magic that devolves him in twisting agony, reshaping him into a set of pestilential gutpipes - the tools of the trade that will eventually be given to his desperately grinning replacement. 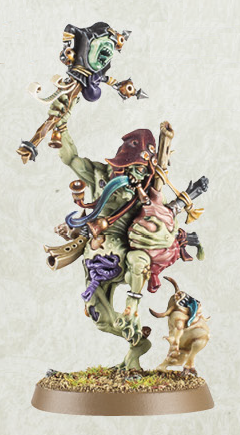