In the Warhammer 40,000 setting, a War Altar is a vehicle dedicated to Nurgle, on which a Champion of Nurgle rides forth and leads their army. It is based on a heavily converted Leman Russ model built by the first Warhammer world champion, David Cain. 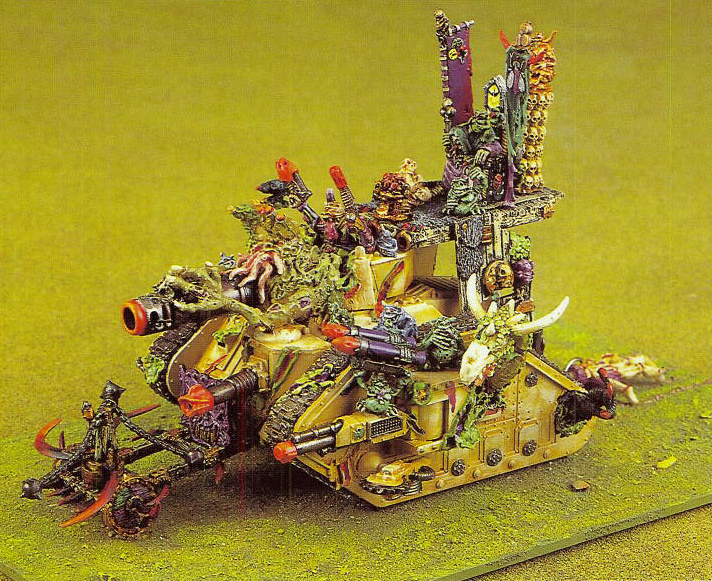 David Cain is the current Warhammer world champion and recently he travelled down from Scotland to the studio to play a brilliant battle against Gordon Davidson which appeared as a battle report in White Dwarf 190. David brought with him his converted Leman Russ, the Nurgle War Altar. Yes there is a Leman Russ underneath all those Nurglings!

Armed with the deadly rot launcher and the vomit spray cannon and those trusty weapons of war the lascannon and the battle cannon, the Nurgle War Altar is ready to roll!

There are a multitude of miniature parts that have been used to make this stunning tank. Answers on a postcard if you can name them all; no not you David! 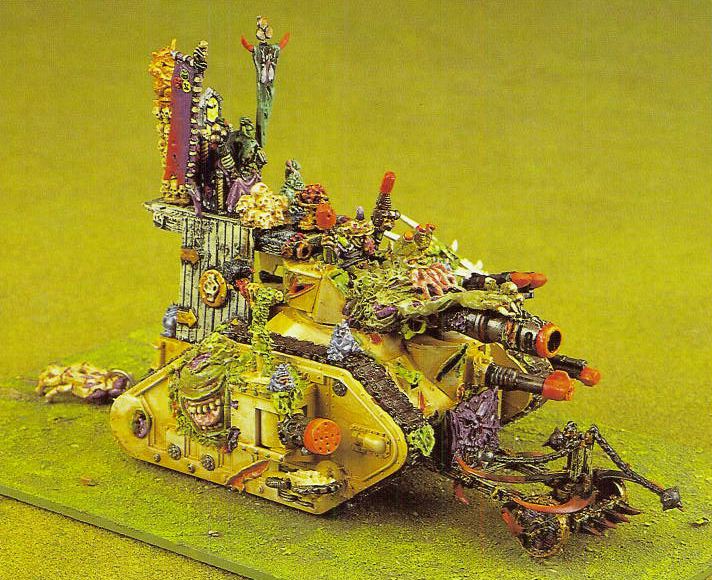 Unique amongst the Chaos Gods, Nurgle takes great amusement in the petty effigies that are constructed in his honour. His gaze will dwell a while on such constructions and as such they act as a beacon to all followers and worshippers of Nurgle.

On the war torn battlefields of the 41st Millennium, such War Altars are found built onto the backs of vehicles to allow the priests of Nurgle to spread disease and pestilence over a wide area. Most commonly, Nurgle's followers utilise tanks so that the Priest gains a measure of protection from the vehicle's imposing firepower. A captured Leman Russ is a particular favourite although any vehicle the cultists have will suffice.

The Nurgle War Altar in 40K

The War Altar can only be included in the Chaos army if it includes at least two squads of Nurgle orientated troops (Nurgle Space Marines and/or squads led by a Champion of Nurgle, not Daemons however). The War Altar is a unique vehicle and as such cannot be further enhanced by the addition of further vehicle cards.

The High Priest of Nurgle is a level 2 psyker and as such gets 2 psychic powers. He is equipped with flak armour and is armed with a laspistol and carries two Wargear cards which are force rod and the throne of Nurgle.

War Altar: The effects of the slime on the altar platform and the presence of flies and Nurglings make hand to hand combat with the Priest fraught with difficulties. Any would be attackers must first bypass the Rancid Appendages (see below) and can then choose to attack the Leman Russ or the High Priest himself.

The altar acts as the focal point for psychic energy and helps to fortify the link between warp space and the physical presence of Daemons. For this reason the High Priest can draw D3 extra warp cards after the cards for the psychic phase have been dealt.

Divine Influence: Followers of Nurgle take heart when the War Altar accompanies them to battle because they sense their deity watching over them. To represent this the following special rules apply to all troops within 6" of the Nurgle War Altar.

Any Nurgle Daemons within 6" of the altar at the start of the Chaos player's turn have a 3+ daemonic save for the entire turn instead of the normal 4+ roll.

Any followers of Nurgle (Nurgle Space Marines or squads led by a Nurgle Champion) within 6" of the altar at the start of the Chaos player's turn roll on the table below. Just roll once and apply the results to all the followers within 6". The effects last for a complete turn; i.e.: until the end of the opponent's turn.

If the War Altar is destroyed or the Priest is killed each individual Nurgle Daemon within 6" must pass a Ld test or be immediately banished back to the warp. For the remainder of the turn and the following turn, those Nurgle Daemons which survived this test only receive a 5+ Daemonic aura save. After this the save returns to normal. Nurgle troops within 6" must pass a break test (on their normal Ld) or will be broken.

The armoured surface of the Leman Russ is no longer recognisable as it is covered with slime, welts, power saws, poisoned whips, tentacles and rotating blades. In addition monstrous creatures and daemonic entities burst forth from its rotting armour slashing and biting.

The total effects of these appendages are 4 fold.

Ablative Armour: The mechanical and living protusions from the rotting surface of the tank act to absorb the energy of incoming shots. As such the first hit to penetrate the armour is completely ignored.

Causes Terror: The tank/altar causes Terror. Therefore troops wishing to charge the altar must pass a Terror test to do so.

Poisoned Blades: In hand to hand combat with the tank, attackers must roll under their Initiative characteristic to avoid the poisoned blades. If they pass the test they can attack the priest or the tank. If they fail the Initiative test they suffer an automatic strength 4 hit from the poisoned blades with an armour save at -1. They are pushed away from the tank and cannot attack this turn.

Nurgle's Rot: Any non-Nurgle aligned models (not vehicles) coming into contact with the tank contract Nurgle's Rot. At the end of each turn roll on the Nurgle's Rot table below for each affected model. Armour saves do not apply unless it is enclosed armour such as Power armour, Terminator armour or Eldar Aspect armour.

The sponson mounted heavy bolters found in the normal Leman Russ are frequently mutated to give more pestilence orientated firepower.

Use the heavy flamer template. This can be placed anywhere within the normal 180 degree fire arc with the narrow end touching the cannon. Anybody under the template is automatically hit and anyone partially under is hit on a 4+.

Those affected suffer a Strength 3 hit with no armour save allowed.

The launcher has a range of 30". A 2" template is placed at the point of impact. Anybody under the template is hit automatically and anybody partially under is hit on a 4+. Those affected have now contracted Nurgle's Rot. Place a Nurgle's Rot counter beside them and at the end of each turn roll on the Nurgle's Rot table above for each affected model.

Attacking the War Altar: When you attack the War Altar in hand to hand combat you may choose to hit either the Leman Russ or High Priest Rancidguts. Attacks are worked out as normal except that Rancidguts may add an extra +1 to his combat score due to sitting on the Throne of Nurgle which is a lot higher than where the attackers will be.

If the War Altar is hit by a shot then roll for location as normal. If the shot hits the Throne of Nurgle then the blast has hit the throne's Conversion Field. If the shot gets through this energy field then it will strike the High Priest Rancidguts. Roll to wound him as normal. If the High Priest is killed the Throne of Nurgle will no longer provide protection from psychic powers from the psychic field.

Making your own Nurgle War Altar

If you choose to make your own Nurgle War Altar remember to try and keep it simple and add the details later. The use of milliput is essential for making models such as this where a lot of filling is required.

I myself do not know what all the bits David used on this fabulous model are but here're a few bits I do know of. A Leman Russ battletank kit, Throne from Nurgle Palanquin, Greater Daemon of Nurgle, an Epic Titan rocket launcher, a Mega Gargant mega cannon, a scattering of Nurglings and anything else that you really like. All of these parts are available from those helpful chaps from mail order.

You Nurgle War Altar does not have to be mounted on a Leman Russ. It could be on a Rhino or Predator, whichever takes your fancy.

High Priest of Nurgle Only