In the Warhammer 40,000 setting, Ogryns are a stable abhuman strain; what were once normal humans have, over many generation, evolved in a different direction. Ogryns are much larger and stronger than normal humans, but also less intelligent. Those Ogryns that have been corrupted by Nurgle's touch have mutated into Plague Ogryns.

Forge World both wrote the background and rules and produced the models for this particular creature, as part of their Imperial Armour series of publications for Warhammer 40,000.

Plague Ogryns are associated with The Tainted. 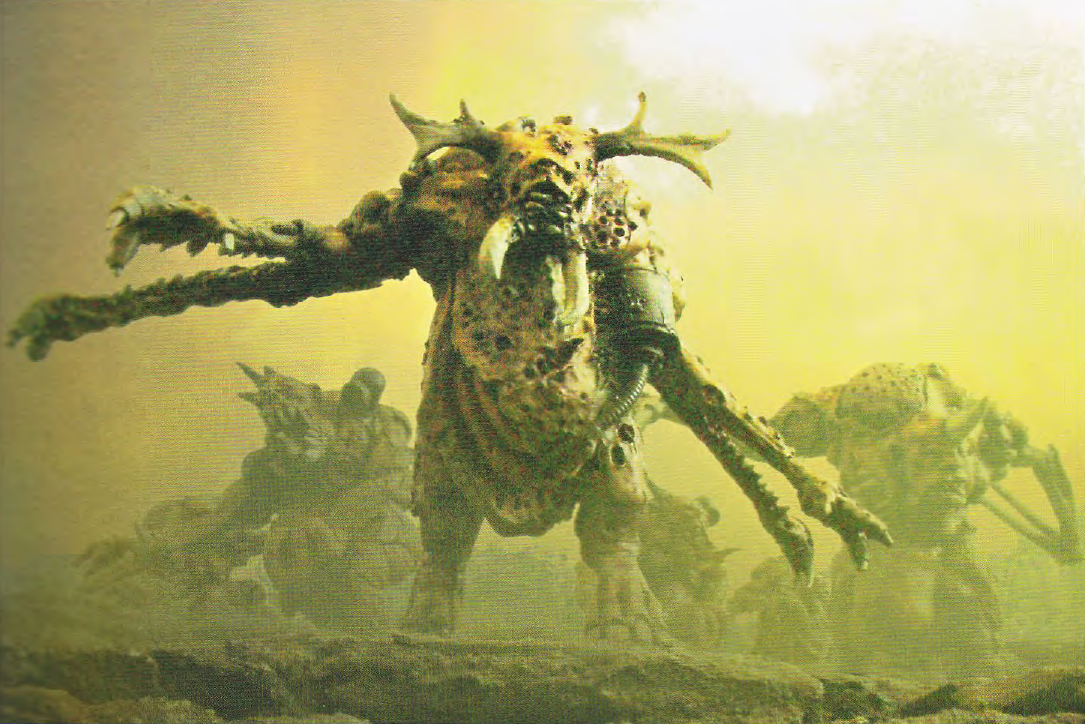 "The corrupted face of the enemy. The 34th line korps' offensive fought Nurgle spawned horrors for eight days as they attempted to close the ring about Vraks' Citadel." 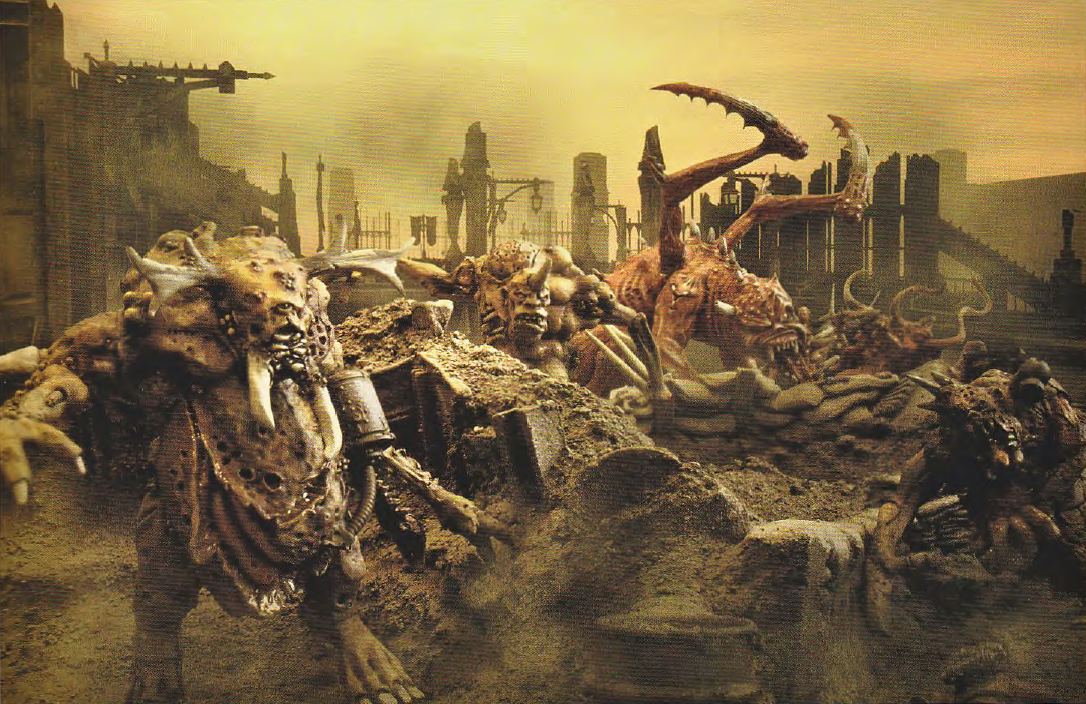 Champions of Nurgle are the chosen of the Lord of Decay, great warriros who have risen from the ranks to become a leader by dint of their prowess and strength. Exalted Champions are Space Marines, the lieutants of the Chaos Lords and one day they may rise to replace their master at the head of a warband of Plague Marines.

Enforcers are strongmen, appointed by the Cardinal's hierarchy as overseers within the ranks, forcing men to fight and follow orders, often at gun point. All are chosen for their loyalty and brutality.

These are the corupt priests of the Apostate Cardinal, preaching heresy and building the rank and file troopers' belief in their cause, in the process unwittingly corrupting their souls into the worship of Daemons and Nurgle.

The inner circle of Chaos worshippers are fanaticals dedicated to the cause. These are the Disciples of Xaphan who form an inner circle of guards around the Apostate Cardinal and his commanders. The disciples will fight to the last, with fanatic zeal for their new messiah! They are superbly trained and have access to the best weapons in the armoury.

The chosen warriors of Nurgle are the Plague Marines - warriors who have dedicated themselves to death and decay for their master. They seek only to corrupt the galaxy and spread Nurgle's diseases to all. Their rotten bodies are only kept alive by Nurgle's dark sorcery.

The Vraks Labour corps contained a large number of Ogryns to perform heavy manual labour. These large, brutish creatures are well adapted to hauling heavy loads and smashing rocks, but are not very bright. An Ogryn will pretty much do whatever it is told by whoever is in charge of its daily rations! Many Ogryns have been subjected to hideous mutation by Nurgle; drive insane by the pain, they are a horrible mockery of their former selves, drooling and noxious with diseases.

Most of the Cardinal's renegade army has retained the vestiges of its former command structure, with officers being replaced by loyal champions; men who have embraced their new gods and are seeking to win their favour.

The vast bulk of the Apostate Cardinal's army are Renegade Militia. These are men that once served the Emperor as Vraks' garrison, its labourers and frateris militia. Many have basic military training, and retain their weapons and equipment, as well as having access to Vraks' vast stores.

After the cash landing of the Aharon's Bane transport, vast numbers of mutants and degenerate scum were unleashed onto Vraks' surface. Although lacking military training or equipment, these degenerate worshippers of Nurgle attack as a rampaging horde.

Nurgle has mastery over the dead and decayign bodies that litter Vraks' battlefields. Through his sorcery he can raise and re-animate the corpses, bringing them back to life to fight again and again and again. Hordes of these creatures shambled over Vraks' toxic landscape, seeking the warm flesh of the living to feast upon.

Mindless and violent, Spawn are the hideously corrupted and mutated followers of Chaos that have displeased their god and been turned into Spawn. Their lives are worthless but they can still kill.

The Renegades are well supplied with tanks and artillery from the storehouses.

These are small bunkers mounting a single heavy weapon and crewed by three men. They are commonly mounted in the Vraks defence lines, forming strong points and providing excellent protection for the heavy weapons.

An artillery strike is indirect fire from artillery units well to the rear, called for by commanders or forward observers at the front. There are many forms of artillery available to the Renegades, from mortar teams up to large Manticore missiles and Bombards. 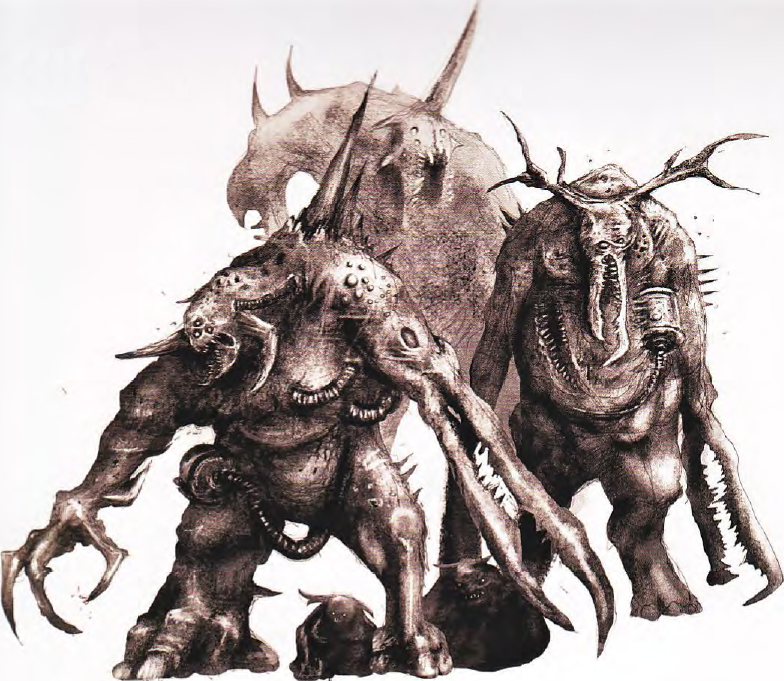 The terrible conditions on Pyurultide have led to almost every inhabitant of the world sporting some manner of mutation. For most this is simply a sign of Father Nurgle's affection, a boon to be worn as a mark of pride. However, for others the Lord of Decay's gifts have changed their bodies so much they can no longer be considered men at all. Their bodies swollen to massive proportions, they tower over the other inhabitants of Pyurultide. Many sport terrible growths of cancerous flesh or huge swathes of dead, necrotised flesh that is impervious to pain. Others erupt into mountains of meat, festooned in tusks, filthy claws, and twisted, gnarled horns. Often, in a perverse discharge of life, these creatures will sprout additional limbs. Some are little more than atrophied stumps, withered and desiccated beyond use, more often though they are perfectly functional. Comprising glistening, raw flesh, they terminate in vicious claws or oozing, dripping orifices.

Although once human, these creatures have now become so common they are virtually a new race. As they bear a distant resemblance to the Ogryn species of abhuman, the Entomancer has designated them Plague Ogryns of Pyurultide, although the Pox Tribes call them simply Hulks or Brutes. Whether these abominations share a common ancestry with true Ogryns is impossible to determine, but has led to the Entomancer to begin research into Pyurultide's history before its emergence into the Vortex.

Abaddon led the final assault force against Cadia in person. With him came the legions of the hellish Eye of Terror, the manifold hosts of the Dark Gods amassed under a single banner. The cause that united them was not just the destruction of the Imperium, but the demise of the material realm itself.

As befits Abaddon's cruelty and meticulous planning, thirteen massive transports of combat-drugged mutants, wretches, zombies and Chaos Spawn were crash-landed into the ruined city of Kasr Kharkovan, ensuring that many of the final assaults were performed by the least storied among his armies.

Destroy it all. Do not stop until it is ruins. Let it become a monument to death.