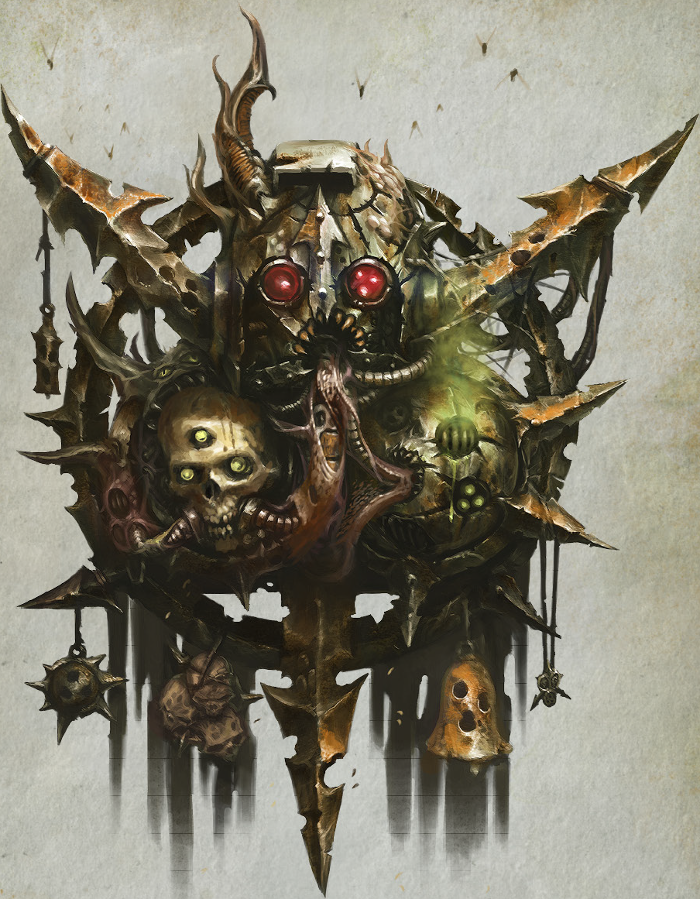 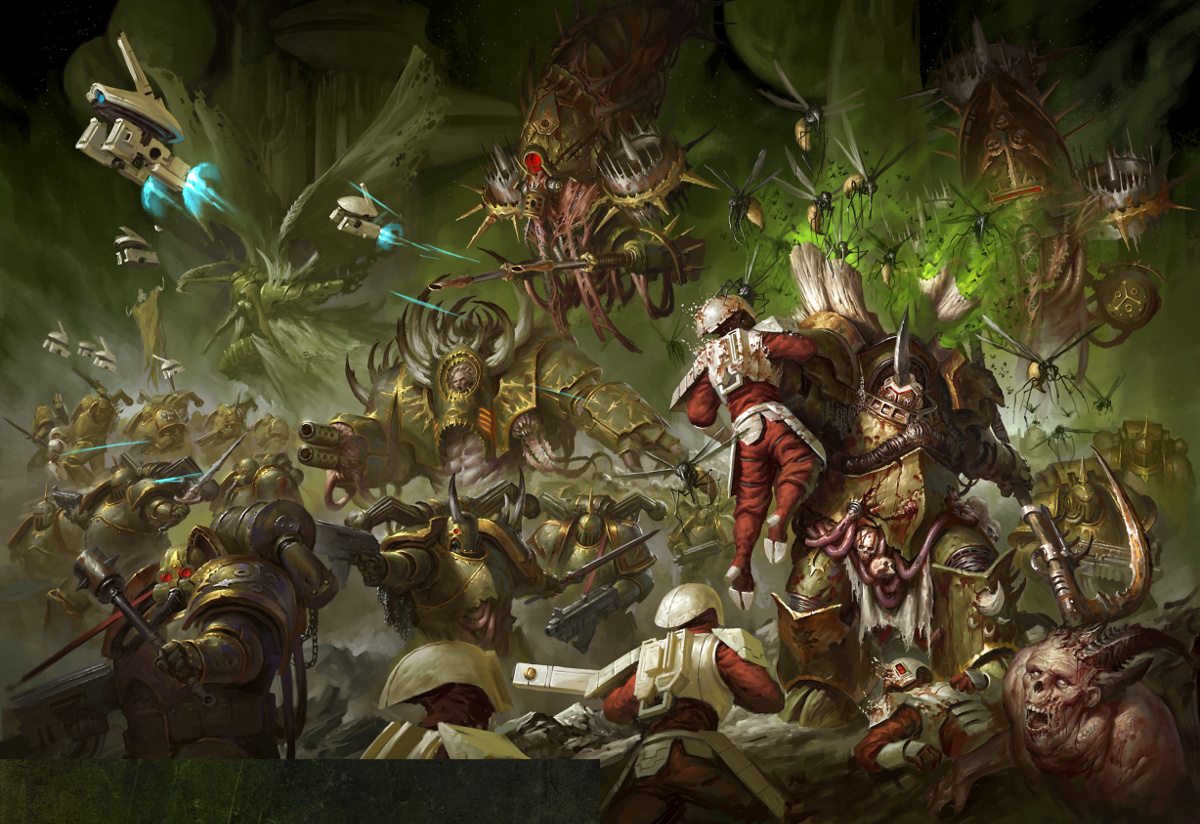 They are a walking pestilence, a living plague of destruction and horror. Their heavy tread heralds the end of hope, and the damnation of all who oppose them. Their touch withers all, be it flesh, metal or faith, and spreads seething corruption that swallows worlds. They are the Death Guard, the sons of Mortarion, the chosen warriors of Nurgle. Fear them, and despair.6-7

'Forget no insult, my sons, as I have never forgotten those of my father, of the Emperor, nor those of Horus. Forgive no slight or grievance. Hold your bitterness deep within, and there let it fester. Let it roil and squirm and churn, until you are filled with bile so poisonous that all you touch falls to ruin. Thus shall you serve Nurgle best. Thus shall you spread his virulent gifts across the false Imperium, and watch its final rotting...'
— Mortarion, Daemon Primarch of Nurgle

Though countless beings across the galaxy worship the Plague God Nurgle, no mortal force stands as high in his favour as the Death Guard. Ancient and corrupted beyond measure, these Heretic Astartes are the bearers of his most noisome gifts.

The first warning of a Death Guard assault is a buzzing drone that grows louder by the second. Rising to a skin-crawling thrum, then a hurricane roar, it is the sound of a billion plague flies swarming across the rank desolation of no-man's land. Amidst this terrifying din can be heard the doleful tolling of bells, the rumble of powerful engines, and the mindless lamentations of the cursed. A carrion wind rises, bringing with it the sickening stench of decay, a spore-thick gale of corpse-gas that swathes the enemy in diseased fumes.

Then come the Death Guard, striding through the billowing foulness. Their eye lenses glow with a sickly light, and their blades drip with noxious venoms. Choking fumes spill from their corroded power packs and flesh-fuelled boilers, further polluting the poisonous air. Some give vent to glottal battle cries, or groan out praise to Grandfather Nurgle. Some laugh with insane glee, the sound wet and retching through vox grills clogged with nameless matter. Most simply advance, silent but for their thudding footfalls and the bubbling wheeze of their respirators.

Amongst the Death Guard are slug-like artillery tanks and drifting Bloat-drones, plague infested Daemon Engines intent on slaughtering the panicked foe. Pustule-ridden Cultists chant invocations of Nurgle. Poxwalkers and plague zombies shamble and groan. Noxious champions loom through the murk, horned helms held high, bodies seething with unholy power. Where the Death Guard walk, the ground rots to pestilent slime, while amidst the murk, cadaverous Plaguebearers and bloated plague mites claw at the thin skin of reality, becoming more manifest by the moment.

Frantic to drive off these grotesque spectres of ruin, the enemy open fire as a thousand maladies rot their flesh and poison their minds. The Death Guard advance through the savage fire-storm, shrugging off punishment that would blast a column of battle tanks to scrap metal. Then they return fire with one crashing volley after another, saturating the enemy lines with diseased slime and infectious shrapnel until nothing remains but oozing corpses. Vehicles rust in seconds, and brave warriors collapse as their skin bursts with pustules and crawls with daemonic parasites. Amidst the horror the sons of Mortarion move inexorably forward, lopping off heads and tearing out innards with their blades. Blight grenades detonate with meat-wet thuds, spraying virulent filth across the combatants, and bodies pile high as the point-blank ferocity of the Death Guard is unleashed.

This torrent of revolting destruction overwhelms the enemy's strength and leaves their last dregs fleeing for their lives. Even escape is a false hope, for mere exposure to the Death Guard is enough to riddle these warriors with incurable plagues, and in their flight they do nothing but spread sickness and despair.

So have the Death Guard conquered countless worlds in the Plague God's name. Their greatest strength lies in their infantry's inhuman resilience and relentless, crushing strength. On the offensive they wear their enemies down like a wasting sickness, eroding their strength until nothing remains. In defence they are immovable, as impossible to overcome as a terminal malady.

Waves of the foe wash against the rotted bulwarks of the Death Guard, but can never erode them. Supported by dark sorcery, noisome Daemon Engines, and weapons as sickening as they are destructive, the Death Guard take pride in enduring the worst that their enemies can hurl at them before annihilating their attackers utterly.

It is not only the blades and bullets of the enemy that the Death Guard scorn. Nurgle has rendered his favoured sons utterly immune to the contagions, toxins and poisons of realspace. No war zone is too extreme for them, no atmospheric blight or rampant contagion too deadly. Virus bombs, rad warheads, even the most forbidden of bioweapons can find little purchase in their bloated flesh. Moreover, the Death Guard gladly unleash these weapons upon their enemies before the conflict begins, the better to prepare a battlefield in which only the children of Nurgle can flourish.

The twisted traits and morbid strategies of the Death Guard stem from the teachings of their beloved master, the Daemon Primarch Mortarion. Though once one of the Emperor's demigod sons, Mortarion has become Nurgle's creature entirely. He is a looming, hollow-eyed terror, a nightmarish Daemon lord whose eternal bitterness and resentment has poisoned his sons as surely as all the gifts that Nurgle could rain upon them.

Mortarion's spite stems back to his earliest days, after the Chaos Gods spirited the nascent Primarchs into the warp and scattered them across the galaxy. It was to the tormented world of Barbarus that Mortarion descended. This gloomy, mountainous planet was cursed with a poisonous atmosphere that thickened the higher one climbed, and forced the human populace to huddle in crude villages in the forested valleys. The mountaintops were the province of foul xenos warlords, malevolent beings whose armies were comprised of stolen human stock transformed into cadaverous marionettes and mutant flesh-hulks.

To the young Mortarion's great misfortune, he was seized by the greatest of these warlords. The creature claimed him as an adoptive son, raising the child in a forbidding keep, as high up in the mountains as the resilient Primarch's physiology could endure. Mortarion terrorised the local populace at his necromantic father's behest for long years, until at last the scales fell from his eyes; the future lord of the XIV Legion realised that the helpless creatures in the valleys were not prey, but his own species.

The full tale of Mortarion's rebellion is told in the Stygian Scrolls. Suffice it to say that rebel he did, leading the populace of Barbarus in a grinding war against their oppressors. He formed the finest of his human soldiery into the first Death Guard, heavy infantry in baroque armour, hardened against the poisons of the Barbaran atmosphere. Yet though it was Mortarion who led the overthrow of the carrion lords, it was the Emperor - keen to reclaim his son and press on with the Great Crusade - who struck the final blow. Mortarion could not forgive him this casual dismissal of his life's struggle, and thus the seeds of bitter enmity were planted.

Before their ill-fated reunion with their Primarch, the warriors of the XIV Legion were known as the Dusk Raiders. Taking their name from their practice of striking just as day became night, the Dusk Raiders specialised in infantry assaults, emerging from the gloom with bolters blazing to eradicate their enemies wholesale. The Dusk Raiders were drawn from the rugged gene-stock of Albia, a Terran empire that long resisted reunification. Known for their tenacity and resilience, these Terran-born Legionaries were relentless on the attack and stoic in defence. Their character was grim, loyal and tirelessly determined, and they claimed countless worlds for the Great Crusade before at last they were reunited with their progenitor. On that day the Dusk Raiders were no more; they became the Death Guard, and the XIV Legion took the first steps on the road to damnation.

The Death Guard are amongst the most ordered and coherent of all the surviving Traitor Legions. Mortarion, ever a traditionalist, still bases their structure upon the vast Space Marine Legions that fought during the Heresy. Each plague company thus numbers thousands of warriors, utterly dwarfing their equivalent formations amongst the loyalist Space Marine Chapters of the 41st Millennium.

For all its theoretical cohesion, in reality the Death Guard Legion is broken up across thousands of galactic war zones, often at the whims of Chaos Lords, champions and the like. These warbands vary hugely in size and composition, but all are known as vectoriums. Those that fight together for any length of time will be named by their leader, and will often adopt - or simply manifest - a unifying colour scheme. Most vectoriums are drawn from maladictums or colonies of the same plague company, but some can be more disparate still.

The Lord Commander of each Plague Company is the sacred host of one of Nurgle's vilest diseases, and the sepsis cohorts that serve him are its most favoured vessels.

The 1st Plague Company is ruled over by Typhus, and its forces are often called the Harbingers. Its ranks are infested with hundreds of strains of the zombie plague, including Shamblerot, the Groaning and Biter's Pox.

The 2nd Plague Company favours mechanised assaults, and boasts huge formations of lumbering battle tanks. Its warriors bear the Ferric Blight, which speckles their armour and vehicles with crawling rust that can swiftly infest the foe.

Known as Mortarion's Anvil, the warriors of the 3rd Plague Company excel at digging in and letting their foes dash themselves apart against their defences. They carry the Gloaming Bloat, a plague of fever sweats that slicks their armour and causes them to speak in wet gurgles.

The 4th Plague Company is ruled over by the gestalt Daemon known as the Eater of Lives. Its Legionaries carry the Eater Plague, also called drizzleflesh, pockchewer and the endless gift, and its inhuman master favours Sorcerers and summonation.

Known to many as the Poxmongers, the 5th Plague Company makes great use of diseased Daemon Engines. Its forces carry the Sanguous Flux, which causes endless, half-clotted bleeding and leaves foul red-black trails behind them wherever they go.

Called the Ferrymen or the Brethren of the Fly, the 6th Plague Company garrisons the Plague Fleets, and acquires new ships for their armadas. It boasts large numbers of Blightlord Terminators riddled with the parasite known as the Droning.

Those of the 7th Plague Company have the honour of being Mortarion's Chosen Sons. They are plague brewers and dark alchemists, and are blessed by Nurgle with the Crawling Pustulance, also known as boilblight, lumpen splatter or Nurgle's fruit.

Sepsis cohorts number around seven hundred Plague Marines, supported by infected auxiliaries, armour formations and Daemon Engine packs. Each sepsis cohort is divided into two maladictums, both a formidable fighting force in its own right.